7 Tips for Being a Good Creative Leader

Back in August, we were so excited to introduce Mara Binudin-Lecocq as the latest winner of the Girlboss Foundation Grant for her customizable, feminist children’s book Secret Code. At long last, launch day is almost here! On Tuesday, November 15 you’ll be able to order a copy for all the badass little girls you know (and yeah, you might be a grown woman, but you should probably get one for yourself, too).

Ahead of the release, we asked Mara to share more of her story and what she’s learned in her accomplished career. Mara is an advertising creative director who recently left AKQA New York, a prestigious digital advertising agency with clients like Nike, Starbucks and Verizon, to pursue RadSeed, the parent company that will be producing Secret Code. Mara just got named one of the Next Creative Leaders by the One Club, was chosen as one of Cannes Lions’ aspiring female leaders, both renowned advertising award shows, and was named one of Mashable’s Rising Stars in advertising.

Looking back, Mara realized that she has a history, from grade school to her career, of being “forced” into leadership positions without expecting it. “It’s strange because as an introvert who got along with everyone and loved ‘doing,’ I never saw myself as a leader. I always thought leaders had to be heartless and a little scary, and give orders from a distance. But I always got shit done or rallied people to help me do stuff. I had no idea that’s really what it means to be a leader.”

Mara happens to be an overachiever — from being an obsessive straight-A student since first grade, entering the most reputable art schools and ad agencies in Paris, Toronto and New York, speaking at and being a jury member at international industry award shows. ”But being a nerd is not what people look for,” she told us. “You just need to give a shit”.

We asked Mara about what she’s learned over the years as she navigated her creative career; here is her advice for creative people leading the way for other creatives:

1. Moving up: Nothing is beneath you. EVER.

I’ve seen many people in 12 years of my career think they are above certain tasks. Well, guess what? These people don’t get promoted fast. Why? Cause they’re. Just. Annoying. Do not underestimate the power of being a good friend at work and someone you can count on. No one likes a person with ego.

You know when that project manager comes and asks you for a favor at 6 p.m. and needs it done by the next day? And, granted, it’s totally his fuck up? Well, if it’s exceptional and you have no plans, help him out. When you do, he’s probably going to spread the word that you saved his life and you’re awesome. And chances are, one day this junior project manager will become a VP, and he’ll remember you helped him out.

When I started as an intern, everyone ignored me at first. They were afraid to annoy me with “menial” tasks. So, I would go up to every art director and ask them if they wanted me to scan stuff or outline photos or even get them coffee. They nervously laughed of course, but after insisting, some of them were like, “Shit. Sorry, Mara, but you know what, it would really help me out if you scanned these for me.” I’d be like, “Of course!” Without it being intentional, I did them a bunch of favors when they were in deep shit. And they returned these favors to me. It started with “Hey, can you design this page for me?” to “Can you do all the illustrations of this campaign?” to “You’re going to be the lead art director for this pitch.” And it all started with scans.

It’s all about trust and progressively learning the ropes, even if you think it’s beneath you. There’s always something to learn from every menial experience. If you’re giving attitude on things you think are beneath you, you won’t move up as fast as others. People promote people they like. Which goes to my next point:

Sometimes you can feel entitled to certain things. The difference between entitlement and empowerment can be tricky; just know that it can be annoying on the receiving end if you’re not using the right language. So, watch with the attitude. If you don’t get along with your boss, you can say goodbye to your promotion. And chances are, you’re really not meant for each other anyway. So leave. And you’ll be happier. Win-win!

But the fastest track to a promotion is making your boss feel like you don’t need them to tell you what to do. Do all the things you think they’ll be asking you, before they actually do. Always surprise them by going that extra mile. Challenge your bosses in a respectful way; impress them with your fresh thinking. “So, usually the format is this but I think it’s important to do this instead. What do you think?” Make your boss proud and make them look good.

At age 28, I was promoted to Associate Creative Director, and my first reaction was, “What!? Are you sure!?” It sounds hysterical, but I’ve heard this every time I promoted a girl without them expecting it. FYI, women accept promotions when they feel they have 100% of the qualifications, and men gun for promotions when they have 60%. Something to keep in mind.

3. Congrats, you’re there: Be the leader you would have wanted to have.

You often wonder, “What’s a good creative director?” Just remember what qualities made you grow under your the bosses you admire: channel those qualities and make them your own. I feel incredibly appreciated by people I have managed, and I can say all the things they like about me come from someone else who taught me that skill, on top of which I add my own sauce to it. I don’t take credit for everything! I was fortunate to be around awesome people whose tips I absorbed. 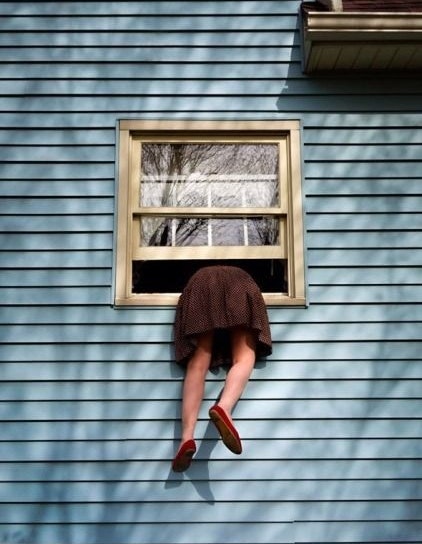 For example, I know I liked really thorough briefs as a creative, with lots of inspiration. I loved it when a creative director would set the bar high with some examples from the get-go. It made me aim even higher. That’s something I always do now. Find your own thing that drove you.

On the other hand, this doesn’t mean that if you liked to be treated a certain way, you should do the same with your creatives. As a creative director, your job is to understand your target audience. Your creatives are also your target audiences and you need to see what, individually, makes them feel inspired and what doesn’t, and slightly shift your leadership style to each of them. If they don’t like you, they’ll leave you. Figure out if that’s what you want.

There’s a popular misconception that successful bosses often need to be assholes, and that type of authority makes them more effective. Think Steve Jobs or Miranda Priestly in The Devil Wears Prada, both excellent creative directors portrayed by the media. Well, I think that’s an old-fashioned leadership style that perhaps worked for previous generations, but we’re millennials and, since everyone’s analyzing us as having “no patience and valuing authentic relationships”: fuck those assholes.

I started working when I was 21 as an intern. And at 22, I became an art director. I even had a dude art director assist me on a project (and he was 25). He was respectful of my leadership because I respected him.

I think we tend to ask ourselves “Do I have enough authority?” and “Am I charismatic enough?” but those are not the right questions. The right ones are: “Is it working? Are my creatives happy? Are they getting cool pieces in their books?” That’s all that matters.

When you’re naturally respectful of others, these old-school leadership values become highly suspect. Like, when you see dudes with their loud voices in meetings and people afraid to contradict them, you’re like “Aw man, that’s not really me, but he looks like such a leader!”, or when you hear things like, “You need to set your foot down and show them who’s the boss!” For me, the first example means you’re a douchebag, and the second one means making enemies for nothing. I believe when someone pisses you off, they probably have the best intentions. Talking down to them is the worst way to get shit done effectively. It’s best to take a step back and understand where they’re coming from, ask questions, and negotiate the outcome.

And when someone is continuously under delivering, just become more curt without being disrespectful, tell them what’s up, and slowly take them off your journey. But always give them time to understand the progress of the relationship. Don’t surprise them like an asshole.

I’m totally sensitive. If you’re creative and you’re not sensitive, you’re probably not that great at your craft, so this is not a flaw, it’s what pays our bills. It’s like, we worry about a taupe color being too desaturated or too vibrant. OF COURSE WE’RE SENSITIVE.

But sometimes it can fuck with our minds, like, “OMG crying is showing your weakness and it’s not very leader-y!”. Fuck that. We’re all different. When I’m annoyed, I get sleepy. When I’m sad, I laugh. And when I’m angry, I cry. My emotions don’t fit the right place and people misinterpret what they mean. All I’m saying: crying doesn’t mean you’re sad and weak!

First, women have 60% more prolactin than men. Those are crying hormones. Tell your boss that the next time. I have cried so many times in front of my dude bosses. They don’t know how to deal with it, which is adorable. I think the more they see women cry, the less they’ll get freaked out when it happens. People need to get over women crying. So if you’re upset, don’t beat yourself up! Dry your tears and move on to solutions.

I hate the whole thing about “Stop saying sorry”. OK, of course you shouldn’t say sorry when you want to speak. Just speak in a meeting like you’d speak with your friends. Would you say sorry to your friends in this situation?

I say sorry all the time. Someone bumps into me, and reflexively, I say sorry. It’s like, what if 1 out of 100 times, I’m the one who bumped that person and I don’t say sorry? I don’t have time to get in an argument here. So, sorry, dude. I have no ego, it’s not a big deal to say sorry (in the sense, that you admit you might have done something wrong). But it can go a long way if you’ve ruffled someone’s feathers.

Once, a managing director of an agency said sorry for hiring the wrong person. It was the most amazing thing to witness. He became a way more awesome leader to all of us when he said that.

7. Even if you’re the boss, find the best boss ever.

I compare climbing the ladder like climbing up karate belts. The end is not the black belt; you’ve still got 10 dans to go. There’s always room for progress. I intend to learn until I die.

The mistake is to think that because you reach a certain director level, it’s over, you’re awesome and you need no one. And when you do feel like you need someone, you’re like “Wait, I thought I was an independent woman?! Does this mean I’m weak?!”

A boxing champion always needs a coach. Not having a boss means you will learn at a slower pace than you could if you were exposed to a great mentor. Find an awesome boss/partner/coach and you will win the championships of your life.