Model and entrepreneur Ally Walsh may have traded in her snow boots for sandals when she made the move from NYC to Santa Monica, but the native New Yorker never misses a chance to soak up the singular creative buzz of the Big Apple. Here’s where she heads when she’s in need of a inspiration reboot.

If you didn’t know Ally Walsh was a New Yorker, born and raised, you might very well mistake her for a Californian — something to which she wouldn’t necessarily take offense (unlike many a New Yorker). As a resident of LA the last six years, there’s something in the coastal air that has vehemently agreed with her, wending its way into Canyon Coffee, the gorgeously packaged and much-buzzed about coffee roastery she founded with her boyfriend, Casey Wojtalewicz.

Walsh, whose career as a model initially prompted her move west, now lives in an airy, light-and-plant-filled Santa Monica bungalow that’s as California as it gets. But of course, despite her effortless acclimation to the Golden State: Once a New Yorker, always a New Yorker.

Born and raised in Long Island, Walsh’s parents made a point of immersing her and her brother in the vast cultural offerings that make New York City one of the creative capitals of the world, constantly taking them to plays and visiting museums. Walsh eventually moved into Manhattan proper to attend the Fashion Institute of Technology, where she fell even more in love — "The energy, the people, the creativity. The city’s so alive,” she says.

Of course, as much as she’s taken to her West Coast life, there’s much to miss about the city, and she tries to get back there as often as she can to soak up the particular strain of creative energy that can only be found on the streets of New York.

Below, catch Ally’s can’t-miss NYC spots, as well as some bi-coastal insights on how to keep it comfortable yet stylish in Lou & Grey’s latest — amidst the endless bustle the city offers up. 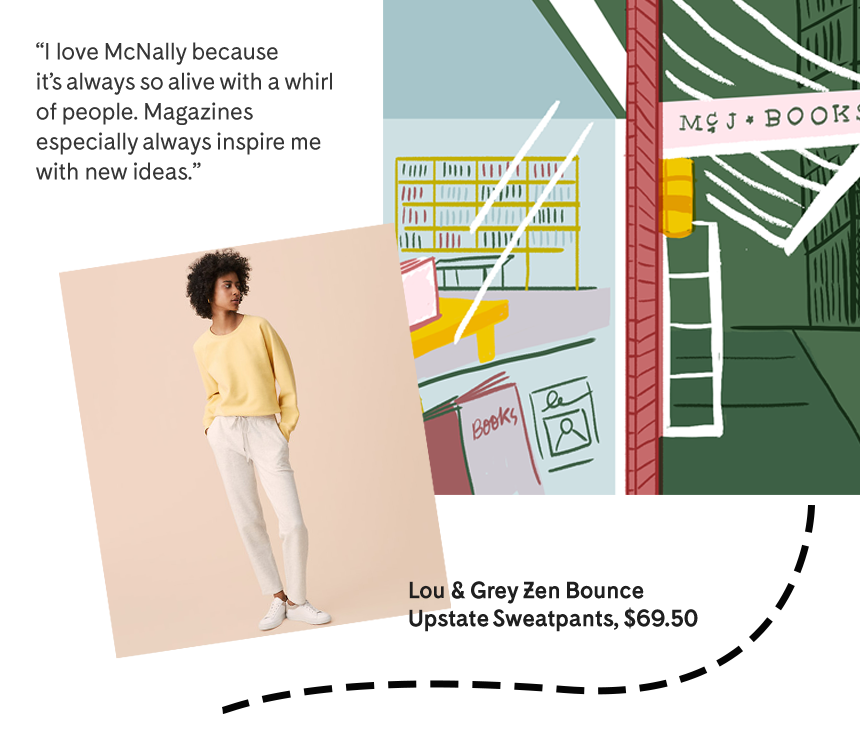 “I’ll stop in any time I’m in Nolita or have some time to go and relax, but especially during the holidays, when I’m walking around with my family and boyfriend. I love books and magazines — magazines in particular always inspire new ideas. And McNally is especially great because it’s always so alive with a whirl of people, and they do such a wonderful job curating their selection.

When I’m getting cozy with a book or a magazine, something like these sweatpants is a perfect fit — not that I’m planning on full-on curling up at the bookstore. But I can at least sit for a while as I browse through some books.” 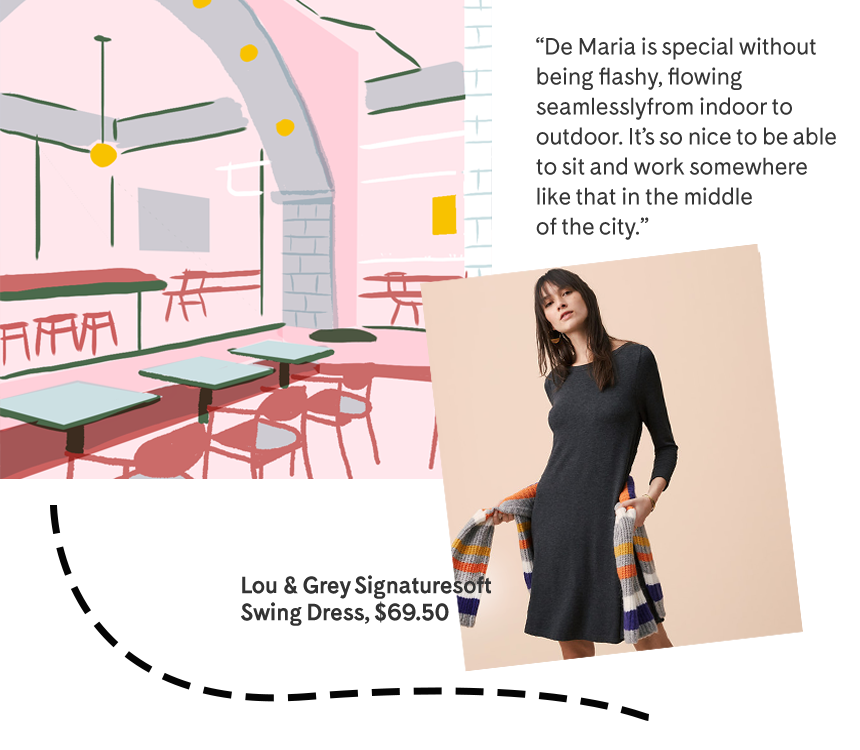 Best place to eat and drink on the regular: De Maria

“When I’m in New York, I go almost daily. They’ve created such a beautiful, lofty space that flows seamlessly from indoor to outdoor, and I love their food menu and natural wine selection. It’s so nice to be able to sit and work somewhere like that in the middle of the city. I’m also a big fan of the chef, Camille Becerra. And I love that De Maria is special without being flashy; something like this dress is a great piece to match that sentiment, and I would feel equally comfortable in it for breakfast, lunch or dinner.” 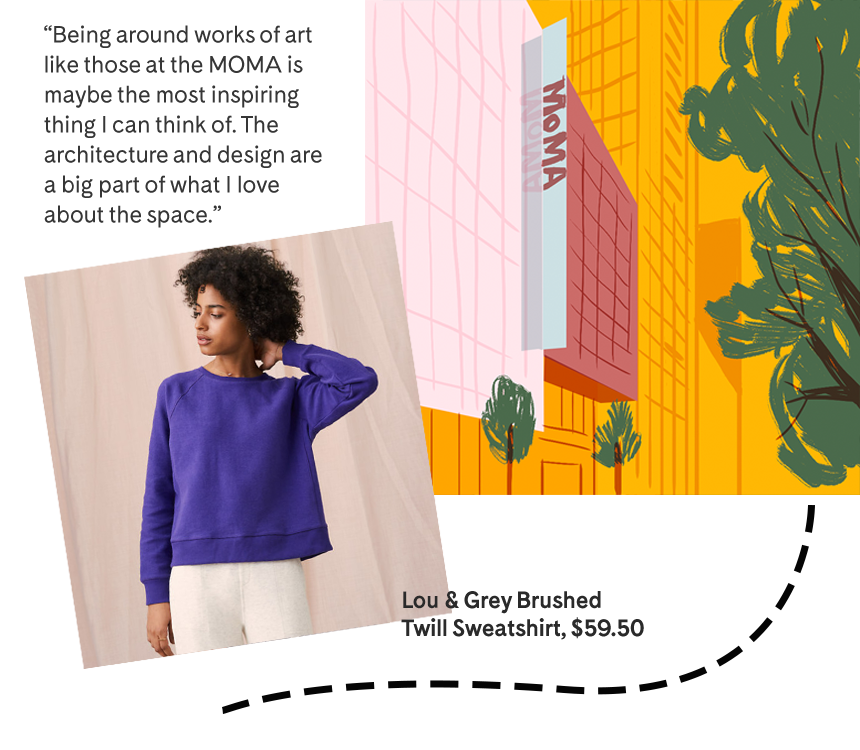 “I go at least once or twice a year around the holidays, or any time I can go with my brother. He has a degree in art history and is getting his master’s for curation, so going with him is like having my own tour guide and historian. Being around works of art like those at the MOMA is maybe the most inspiring thing I can think of! I’ve always had an appreciation for it, thanks in large part to my parents always bringing us to the museums.

The architecture and design of MOMA are a big part of what I love about the space. Just as it provides a neutral but stylized backdrop for displaying works of art, so does this sweatshirt, which makes a statement without distracting.” 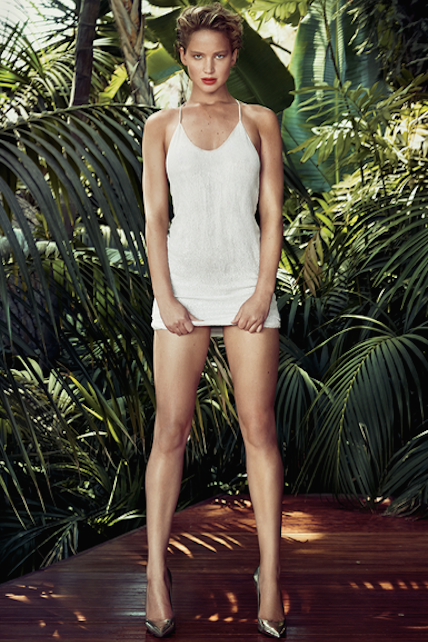 Best place for some deep reflection: The Williamsburg Bridge

“I’ll walk from Manhattan to Brooklyn whenever I have a free day in the city and am feeling ambitious. I just love everything about that walk — even just the fact that it’s possible to walk from one to the other. That transition over the river is a nice time to reflect while taking in the views of the city.

On the way over, I’m already devising my plan for where I want to go or who I’m going to meet up with. Getting to the other side, I feel like I’ve ‘arrived’ and am excited to explore. I like to this vest, because it’s comfortable but practical for a long walk.” 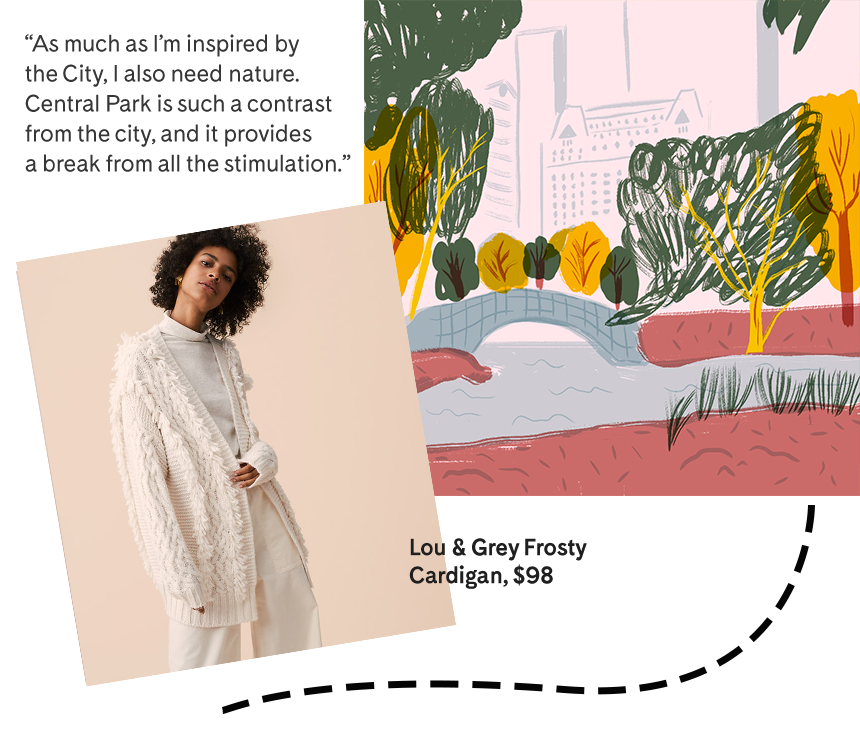 Favorite escape from the hustle and bustle: Central Park

“As much as I’m inspired by the city, I also need nature. Central Park is such a contrast from the city, and it provides a break from all the stimulation. I love taking long walks and feel rejuvenated from being around all the plants and natural beauty, so I try to go at least once every spring, summer or fall.

I love this cardigan because it’s professional enough that I can wear it to a meeting, but not so ‘business’ that I can’t just slip into the woods. And I love how cozy it is.”

Girlboss Picks for the Perfect NYC Day from Lou & Grey