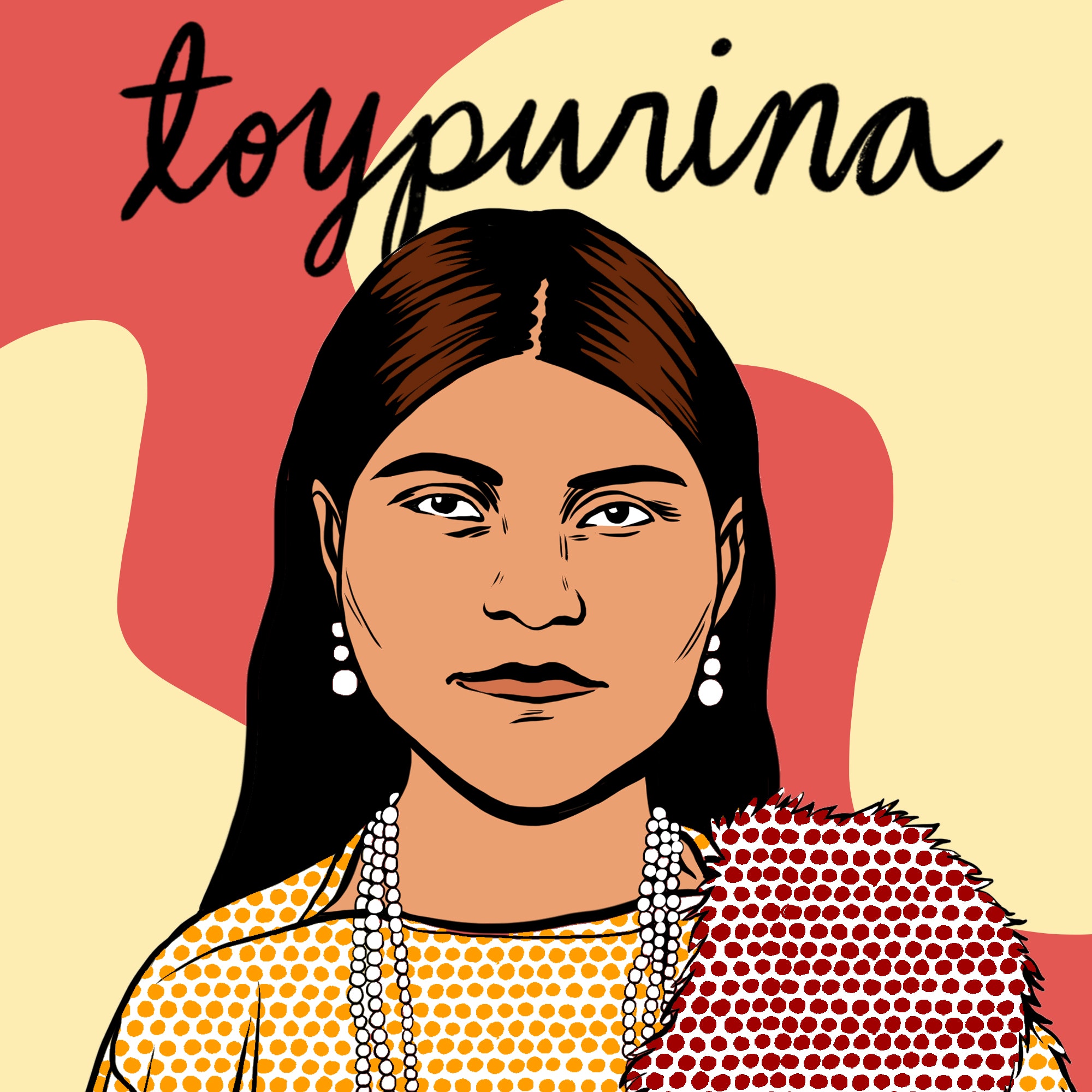 Meet Toypurina, a Native American heroine who rallied her people to fight against genocide, colonization and cultural oppression.

Toypurina was born in 1760 into the Kumivit tribe of Southern California. Their descendants today refer to themselves as the Tongva people after the collective name of their Native languages.

When she was just nine years old, Spanish colonizers invaded the Los Angeles Basin. Over the course of fifty years, more than twenty missions were established on her people’s tribal lands in an effort to convert the local people to Roman Catholicism.

These missions were not only religious outposts, but military strongholds, with padres living side by side with armed soldiers. These soldiers guarded the mission and assisted in keeping the “new converts” or “neophytes” compliant. By any, violent means. Practicing spiritual beliefs and sacred customs were punishable by whipping or caning. Reports of women being abused and raped were very common.

Contagious diseases brought by the Spanish also decimated the Native population, killing thousands of people among the 50 communities in the valley. The closest mission to Toypurina’s home, San Gabriel, was established when she was 11 years old. Of the estimated 5,000 Kumivit people, a sixth were forcibly baptized at San Gabriel. Her people eventually became known as the Gabriellino.

Resistance to the Spaniards had been as swift as their arrival, with many rejecting the cultural assimilation imposed on them. Revolts against the mission system occurred as early as 1656 and Toypurina emerged as one of the most memorable heroines of the ongoing resistance.

By the age of 24, Toypurina was a respected religious leader and medicine woman amongst her people. Through her trading and spiritual guidance, she had learned to speak many of the Tongva languages and had become a persuasive communicator—skills she utilized to rally a force of six villages to attack the San Gabriel mission.

The impetus for the revolt seems to have been the banning of traditional dance within the mission, a final leniency to the Gabriellinos, quashed by the authoritarian padres’ system of cultural genocide.

While Toypurina gathered a force outside the mission walls, “neophyte” Nicholas José was rallying resistance within. They joined forces with two village Chiefs to plan a combined attack that they hoped would overwhelm the guards of San Gabriel and allow them to kill the Spanish invaders.

Toypurina’s role in the attack drew on her experience as a medicine woman. She was to immobilize the priests using her spiritual powers while the warriors eliminated the guards.

On the night of 25 October, 1785 the warriors approached the mission. Unarmed Toypurina stood by, encouraging them to fight. They scaled the walls of the mission. The revolt began.

The battle was short. The attackers were ambushed by the Spanish soldiers. Most of the warriors including Toypurina were captured. The missionaries had been tipped off by a soldier who understood some of the Tongva languages and had overheard people discussing the planned revolt.

In a trial of those involved, 17 warriors were sentenced to a public lashing to show the neophytes and the unbaptised Kumuvit the consequences of their opposition. The worst punishment was reserved for their leaders.

When Toypurina was questioned about her involvement, she was bravely upfront with her motivation behind telling Chief Tomasajaquichi of Juvit village to tell the Kumuvit people not to listen to the priests.

“I commanded him to do so, for I am angry with the padres, and all of those of the mission, for living here on my native soil, for trespassing upon the land of my forefathers and despoiling our tribal domains.” The Governor, Don Pedro Fages, found Nicolas José and Toypurina guilty of being the principal leaders of the attack.

While the padres acknowledged that Nicholas José was the one with the initial idea to attack San Gabriel, the Spanish viewed Toypurina as a “witch” who had used her spiritual powers and influence to persuade the villages to fight.

After a year and half of brutal imprisonment, Toypurina was baptized a Christian. As a result, Padre Miguel Sanchez exiled her to the San Carlos Borromeo de Carmelo Mission, now Carmel, California. In what may have been a cruel acknowledgment of her leadership, Padre Sanchez gave her the Christian name “Regina” meaning “Queen.”

Two years later she married a Spanish solder, Mañuel Montero, and later had three children: Cesario, Juana de Dios, and Maria Clementina. She lived in the area around Monterey with her family. At the age of 39, she died at the Mission San Juan Bautista.

The legend of Toypurina has long been told among the communities impacted by her contribution to history. To Indigenous people, academics and historians, she is a Native Joan of Arc—both women taking on the role of spiritual leader of their people, fighting a rebellion against foreign powers, and finally suffering unjust trials and tragic ends.

While her life after the rebellion could be seen as a relenting to the culture of the Spanish—presumably because she had no other choice, barring death—in many ways she exemplifies a woman who adapted to difficult circumstances in order to survive. The continued survival of the Tongva people and their culture is a resounding testament to her resistance and resilience in the face of colonization.

While Toypurina’s contribution has long been overlooked by mainstream history, her legacy has been broadly recognized more recently. In 2007, her contribution to the history of California was acknowledged by the Studio for Southern Californian History. Her story has also provided creative inspiration for a new generation of Native and Latino artists.

A play about her life was written by two members of the Gabriellino and premiered at the San Gabriel Mission Playhouse in 2014, and toured California in 2016. A short film about her life has also been made. Chiliean author Isabel Allende payed homage to her in her 2005 book, Zorro,naming a character in her honour.

A number of public artworks in LA bear testament to the legend of Toypurina near the place where she led the revolt. In the San Gabriel Valley, one large mural decorates the side of the Ramona Gardens public housing complex. In a building that houses mainly Latino families, Toypurina represents to the creators “the ultimate strength, the woman fighter, the mother who protects her children from harm at Ramona Gardens.”

Judy Baca’s artwork “Danza Indigenas” recreates an archway from the San Gabriel Mission over a floor plan of the building marked into the plaza of the Baldwin Park Metrolink Station. The stone mound within the installation is designed to replicate a place of prayer for the Gabriellinos, and as Baca explained to the LA Times as “a tribute to Toypurina.”

In paying homage to this incredible woman, these artists are ensuring Native American youth are inspired by her story of resistance to oppression, and continue her legacy of protecting the sacred for a new generation.