The Rebel Tale Of The Freedom Fighter Who Helped Decolonize Mexico

US historians rarely identify or even mention the significant contributions made by colonial women during the American Revolution—typically only going so far as to glorify slave-owning politicians who never bothered to aim a musket. However, our neighbor to the south, Mexico, has honored the women of its revolutions. Leona Vicario’s rebel tale makes her no exception. 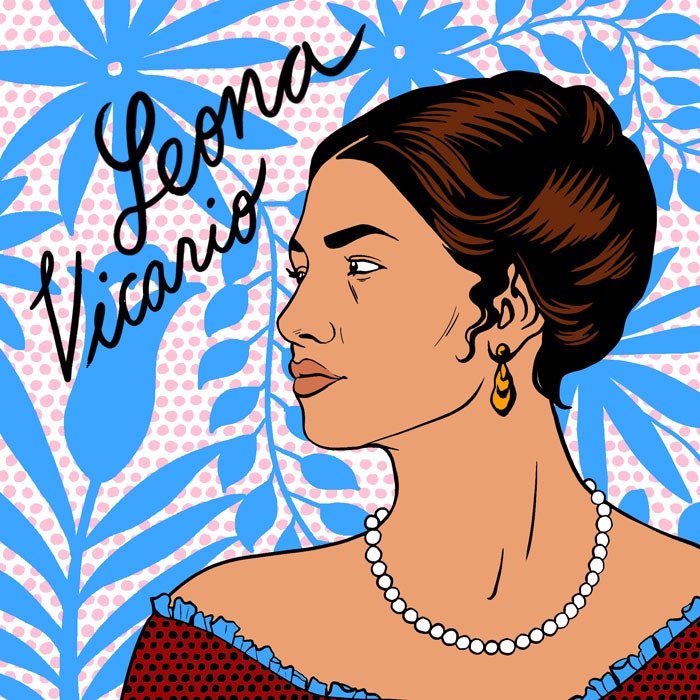 As the most prominent female figure in Mexico’s War for Independence waged from 1810-1821, Leona Vicario is regarded as the “Distinguished and Beloved Mother of the Homeland,” a title officially anointed to her by the Mexican Congress of the Union in 1842. In 1910, Leona Vicario and Josefa Ortiz de Dominguez were the first Mexican women to be depicted on Mexican postal stamps. Mexico honored Vicario in 2009 by issuing a five peso coin with her image in anticipation of the bicentennial. But who was she, and why the acclaim?

Leona Vicario was baptized as Maria de la Soledad Leona Camila Vicario Fernandez de San Salvador in Mexico City, New Spain. As the daughter of a wealthy Peninsulare (a.k.a Spanish-born) merchant father and a Criollo (Iberian-born in New Spain) mother, Leona had significant social standing in New Spain’s racist caste system that was forcefully imposed on it by the Spanish.

The 16th century Spaniards, along with their overlords in the Roman Catholic Church, were so obsessed with race that they produced posters commissioned by artists to describe the 16 official “racial mixtures” along with their legal statuses. Because of Leona’s parentage, she was publicly acknowledged at the top of the food chain. It made her virtually untouchable when it came to capital crimes, along with a treasure trove of social privileges.

In addition, Leona’s caste status guaranteed her an extensive education. She read and collected Spanish and French literature, studied the fine arts, and enjoyed classical music and singing lessons. European literature at this time was filled with political rhetoric advocating the overthrow of the monarchies. Napoleon was at war in Egypt and the rest of Europe. In North America, Toussaint Louverture had successfully defeated Napoleonic France. Leona developed a rebel spirit.

Leona was 18 when both her parents died in 1807, and by Spanish law, she was assigned to the custody of her maternal uncle and eventual legal guardian Agustin Pomposo Fernandez de San Salvador. He was a Mexico City attorney and a Criollo by birth.

A life of submissive dependency did not interest Leona, however. Leona’s intellectual flowering and interest in  radical political views only agitated her maternal uncle, but her extensive education had given her a foundation to develop critical thinking skills, which encouraged independence from her uncle’s patriarchal views, and the perimeters of her social class. Leona refused to be bullied.

She won a court battle to reside in her own property, with her own residential staff in Mexico City. Her uncle countered by buying a property adjacent to hers and arranging for her immediate engagement to Octaviano Obregon, a colonel in the Spanish Army and an attorney working for his firm. Leona cleverly evaded any form of marital commitment to Obregon, but her flirtations with revolutionary idealists soon brought her to the attention of another lawyer, Andres Quintana Roo. The pair eventually married.

Leona joined Los Guadalupes, a secret society receiving and distributing insurgent correspondence for the independence of New Spain from the Spanish Crown. Leona expanded her involvement by using her banking connections to secretly finance various stages of the rebellion.

She furthered her commitment by directly buying arms and acquiring raw materials to make cannons and artillery. Leona also arranged the purchase and shipment of medicines to Vera Cruz. She secretly transported them to Peninsulares neighborhoods in Mexico City where she also hid revolutionary compatriots. She was all in.

Not content as a provocateur and arms dealer, Leona then teamed with Quintana Roo to perfect her journalistic prose and write political articles. He provided his family’s printing presses to produce their liberal political ideas for the masses. Leona’s revolutionary networks then distributed those leaflets, informing the public of Spanish atrocities towards Native and Mestizo civilians, crimes associated with the established social caste system, and the need to obtain self-rule independent of Spain.

All this was done clandestinely. While her suitor Octaviano Obregon traveled to Spain to receive another commission from the Spanish crown, Leona secretly married Andres Quintana Roo.

In 1813, Leona’s correspondence to Andres and her revolutionary network was intercepted by Spanish Royalists. She was arrested fleeing Mexico City. Because of her Peninsulares class status, the Court of Inquisition was limited in its right to punish her brutally while interrogating her about the location of her revolutionary collaborators.

The court confiscated all her real properties and other bank assets, convinced a life without wealth and privilege would soon enough reveal all the information they were seeking. When that didn’t happen, the Court of Inquisition sentenced her to a convent prison at Belen de las Mochas.

They escorted her out of the convent to the nearest village and provided Leona with the materials to disguise herself as a servant. She returned to Mexico City and reunited with Andres Quintana Roo to continue their revolutionary activities.

Four years later, Leona and Andres were both arrested, but they were immediately granted amnesty from the Spanish Royalists. In 1823, the newly-formed Mexican Congress rewarded Leona Vicario for her numerous sacrifices on behalf of the nation of Mexico.

She was given an estate, several houses in Mexico City, and a cash settlement for the total loss of her fortune in the service of her country. Leona passed away in 1842. She received a Mexican State funeral, and her remains, which have been re-interred several times, are at the National Palace placed in the National Gallery.

Leona’s commitment to change demonstrates how one woman can make a huge difference. As a woman born into a society characterized by extreme patriarchal and colonial dominance, Leona’s independence and resolute will helped decolonize her country, and ultimately become an icon of Mexican history.