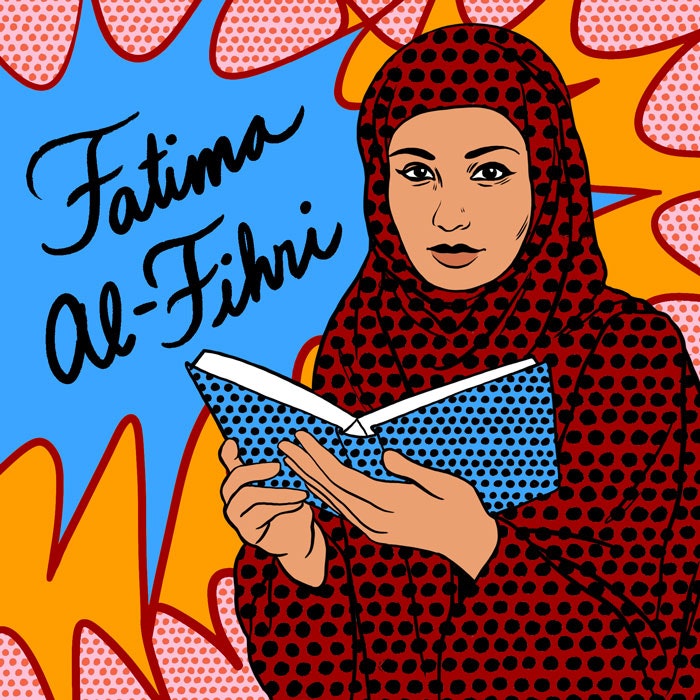 If you had one guess at the world’s oldest university, you wouldn’t be alone in imagining an ivy-covered, cobblestone tower in Western Europe. And given the great gender disparity in education—two-thirds of the world’s illiterate population are women—you’d think that higher education started as a boys’ club.

But in fact, we have a young Arab Muslim woman named Fatima Al-Fihri to thank for establishing the university system as we know it today. In 859 CE, Al-Fihri founded the University of Al-Qarawiyyin in Fes, Morocco, which is recognized by the United Nations as the oldest existing continually operating university in the world, as well as the first to award degrees.

Born in modern-day Tunisia in the 9th century, Al-Fihri grew up in a well-educated and well-to-do family. When she was a child, Al-Fihiri’s father, Muhammad, moved the family to Fes in search of better opportunity, during a period of heavy migration. Initial years of struggle soon gave way to a life as a successful merchant.

Al-Fihri and her sister Mariam were lucky to have their curiosity of the world supported and encouraged by their family and environment. Fes was the vibrant epicenter of knowledge and culture, often referred to as the “Muslim West,” where the arts and sciences flourished alongside religious tradition. It was the perfect setting for Al-Fihri’s intellectual and spiritual growth to be nurtured.

The untimely deaths of her father, husband, and brother in quick succession left Al-Fihri searching for new purpose, however. Endowed with a sizable inheritance from their father, Fatima and Mariam were gifted great financial independence, and with it, opportunity. As devoted religious students, the sisters were moved to put their newfound wealth back into the community in which they’d grown up.

We have a young Arab Muslim woman named Fatima Al-Fihri to thank for establishing the university system as we know it today.

Noticing that the local mosques in Fes were starting to overflow with the influx of refugees from Islamic Spain, the sisters set out to create spaces that could accommodate everyone—immigrants and natives alike. While Mariam dedicated herself to building the Andalusian Mosque, Al-Fihri put everything into the Al-Qarawiyyin Mosque, with a plan for something bigger.

Al-Fihri was involved from the ground up, from managing all the details of its construction—during which she fasted in the tradition of Ramadan for two years until the project was complete—to establishing it as an educational center where the community could gather and learn.

Soon, the madrasa blossomed into a full-on university, the first ever to award degrees. Named after her birthplace, the University of Al-Qarawiyyin opened its doors in 859 CE.

The institution served hundreds and thousands of students across centuries, in fields spanning well beyond religion—from music to rhetoric, logic, astronomy, mathematics, chemistry, medicine, and more. While Europe was struggling through the Dark Ages, the Islamic world was thriving in its ascent into the Golden Age of science, medicine and beyond.

Al-Qarawiyyin attracted the best and brightest, and became a space not just for some of the most brilliant minds of the Muslim world, but for non-Muslims as well. Muslim historian Ibn Khaldun, Jewish philosopher Moses Maimonides, and Andalusian diplomat and explorer Leo Africanus were just a few among the university’s notable graduates.

It was in those ornate, mosaic-tiled halls that early algebra was invented, and it was where Pope Sylvester II first learned of Arabic numerals—0, 1, 2, 3 and so on—and brought them to Europe. Indeed, scholars translated much of the studies conducted at Al-Qarawiyyin and disseminated them throughout the Western world, paving the way for Europe’s Renaissance period.

Naturally, Al-Fihri wasn’t about to miss out on the revolutionary education she made possible for so many. She became a student of the school herself, and her diploma, carved in a wooden board, is still on display in the library today. And her love of learning didn’t end there; she continued to attend lectures at the school well into her later years.

In addition to holding the title for the world’s oldest university, the Al-Qarawiyyin Library is regarded as the oldest in the world, and it preserves some of Islam’s most valuable manuscripts.

While Europe was struggling through the Dark Ages, the Islamic world was thriving in its ascent into the Golden Age of science, medicine and beyond.

It’s home to more than 4,000 works by respected scholars from across the region, including texts as treasured and rare as a 9th century Quran. In its prime, the library was “a bridge of knowledge of researchers, between Africa and between the Middle East and Europe,” Abdullah al-Henda, a member of the library’s restoration team, told NPR.

After the 16th century, the Islamic world was hit with a series of events that slowed the region’s dominance. But even amidst the shifting balance of power in the world, Al-Qarawiyyin continued to attract scholars to its storied grounds. The university was formally incorporated into Morocco’s state university system in 1963. Today, the university’s doors are still open to the public, offering education to women and men from all over.

For centuries, the library was open to scholars and researchers alone, but a new wing opened in 2016, inviting the general public into its confines for the first time. In preparation for its grand opening, the library underwent a massive restoration, which included the installation of solar panels and air conditioning to protect the books from humidity.

The project was overseen by another badass woman of note, Canadian-Moroccan architect Aziza Chaouni—a detail that would no doubt please the spirit of Al-Fihri.

More than a millennium after her death in 880 CE, Al-Fihri’s legacy and impact is still felt in Morocco. “She was a visionary,” Abdelmajid Al Mardi, the mosque’s Imam, told Al Jazeera. “This university had a huge impact on different cultures and civilizations; it was a spring of innovation.”

It’s hard to say how the course of history may have changed had it not been for Al-Fihri’s generosity and dedication to knowledge. But it’s clear that the modern world and the global fight for gender equality in education owes much to this trailblazing woman.