Home / Read / This Technique For Relieving Stress And... Experiencing bouts of intense stress and anxiety? This increasingly popular, super-simple technique could help tame your negative emotions in a major way.

I have anxiety that never sleeps (join the club, right?), and one night recently, I texted a friend who similarly struggles with the condition to see if she had any out-of-the-box sleep techniques I could try.

Her response? “Take three fingers and rapidly gently tap for 30 seconds each: above your eyebrows, below your eyes, above your lips, temple.” And while I didn’t know it right then, what she was advising is actually a spinoff of a technique that’s becoming increasingly popular in the world of integrative medicine—a holistic approach to treatment that combines “modern medicine with established established approaches around the world,” as the Osher Center for Integrative Medicine at the University of California San Francisco defines it.

And while I might not have realized what I was doing at the time, here’s what I discovered: It worked for me in that moment. I mean, I didn’t immediately have zero anxiety, but the tapping exercise helped me lower my heart rate, regain my focus, and get better prepared for drifting off to sleep.

“Tapping” comes from the basic ideas of acupressure: an ancient method of sending signals to the body to trigger the body’s own self-healing mechanisms. Acupressure helps correct imbalances and restore the flow of vital energy (Qi), and can be practiced with needles or other means.

Helen Racz, a tapping expert, explains that with tapping, you’re basically “using fingertips instead of needles,” using the tapping of your fingers to stimulate certain body responses—like the release of anxiety. Practitioners call it EFT, an acronym for “Emotional Freedom Technique” (which, yes, sounds very woo-woo, but there’s legit research behind it).

“I tell people that tapping is similar to hitting your phone or banging on your TV when they go on the ‘fritz’ in order to make a better connection,” says EFT tapping practitioner Kathy Atkison. “It is interesting how often that really works.”

In its most basic form, the notion is that if you tap specified areas with the prescribed focus and intensity, you’ll stimulate your nervous system in way that will make you feel better. And if you don’t, well, all you’ve done is center your focus for a few minutes (so no harm trying, right?).

Margaret M. Lynch, creator of the “Tapping Into Wealth Coach Training Program,” explains that tapping is a major key to self-care for two reasons.“First, it’s a powerful mind-body tool that immediately calms down the nervous system, like a physical switch,” she says, and second, she cites its ease of access: “It can be used in-the-moment for a fast and effective intervention.” 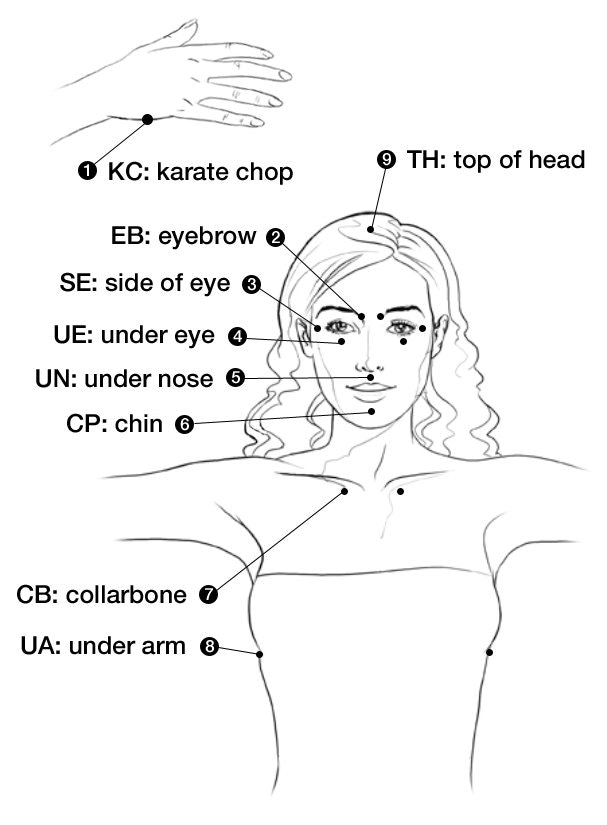 The basics of tapping for anxiety can be integrated into your self-care rituals wherever they best fit in your day. “I use tapping every single day to deal with my own daily stress and any conflicts that surface at home or at work. I make sure I put a specific time aside for myself, get still and quiet, choose a target that’s bothering me, and start tapping,” says psychotherapist and EFT expert Carol Look.

Advocates of EFT are quick to tie the technique to millions of users and a sturdy body of empirical research, including analysis conducted by Harvard Medical School psychiatrist Rick Leskowitz, although some of the conclusions are tenuous.

Lynch acknowledges that the ease of tapping is one of its keys to its success: “Most people struggle with the time and disciplined habit of regular meditation,” she explains, so tapping is a great alternative. Racz adds that it’s literally for “anyone feeling stuck in something unpleasant mentally, emotionally, physically or spiritually.” Which is pretty much everyone.

And even if it turns out to not be for you, the nice thing about tapping is that you literally have nothing to lose in trying it, aside from a few seconds of your day (and maybe looking a little goofy).