Scope‘s super simple approach to to-do lists is a stand-out in a sea of complicated productivity apps, making it our “App Of The Week.”

Creating a to-do list is one of those quotidian things that is surprisingly personal, much like budgeting, battling your inbox, or organizing your bookshelves. Side note: For the record, organizing your books by color instead of alphabetically is pure whimsical nonsense and everyone knows it.

Despite my Virgo-ness and alleged obsession with doing things efficiently, I’ve always failed abysmally at sticking to a to-do list method that works. Wunderlist? Traumatic. Bullet journaling? Illegible. Evernote? Passably usable, but my notes mostly look like someone was trying to write an acrostic poem while “balancing the budget” after three glasses of wine.

Enter Scope, a new list-making app so simple that it’s more or less impossible to overcomplicate things. Which, as it turns out, is exactly what I need.

Here’s how it works: To create a new list, you swipe right. Then you add tasks, with an option to set a reminder that will deliver a push notification to your phone.

To move between lists, i.e. “Work” or “Personal” or “Stuff I’ve Been Avoiding For 5+ Years,” you simply swipe left or right. Complete the task and reap the reward of tapping the circle next to it, which in turn yields a satisfying vibration from your phone. It really is as simple as that. 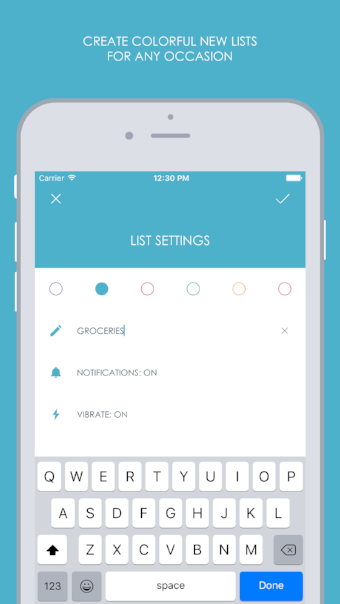 Perhaps somewhat counterintuitively, it’s this very lack of sophisticated functionality that allows Scope to be so efficient. There’s no room to elaborate on anything beyond the basics.

Whereas masterful use of Google Cal requires four-plus years of experience plus a bachelor’s degree in data science, and Evernote is basically a nihilistic void into which all your tasks eventually disappear, Scope distills to-do lists down to their essence, adds the functionality of a reminder, and that’s it.

Its closest cousin is writing out a physical to-do list, only you’re not required carry around one of those relics referred to as a “pen.”

Ready to show your to-do list who’s boss with an aesthetically pleasing, extremely user-friendly interface? Scope costs $0.99 and can be purchased here.