How To Recreate The Best SATC Looks For 2018

On June 6, 1998, Sex and the City premiered on HBO and changed the cultural zeitgeist forever. Yes, it’s was a T.V. show, but think about this:

Are you a Carrie, a Samantha, a Miranda, or a Charlotte?

Even if you’ve somehow managed to go through the last 20 years without seeing a single episode of Sex and the City, odds are you can answer that question. (For the record, I’m a Miranda.) That’s a culture shift.

But beyond changing the landscape of television for and about women, Sex and the City changed the way many women looked at fashion. The four main characters taught us that rules were made to be broken (yes to visible bra straps!), introduced us to new trends (hello giant flowers), and made us feel like clothing could be an extension of ourselves.

In honor of the show’s 20th anniversary, we’ve broken down some of the series’s best looks so that the Carries, Samanthas, Mirandas and Charlottes of today can bring some of that style into their 2018 lives. Here’s how to recreate the best Sex and the City outfits of all time.

Samantha’s look was all about confidence. She wasn’t afraid of color or print and she wasn’t afraid to clash. It was Samantha’s sex-positive, work hard, play hard personality that made her the center of attention, but her wardrobe of power suits with big shoulder pads and skin-tight dresses certainly didn’t make her shine any less.

Samantha proved that looks don’t need to get more conservative as you grow older. She taught us that we can wear what we want, when we want, as long as we’re accessorizing the look with self confidence.

For instance, a red gingham crop top with matching shorts. 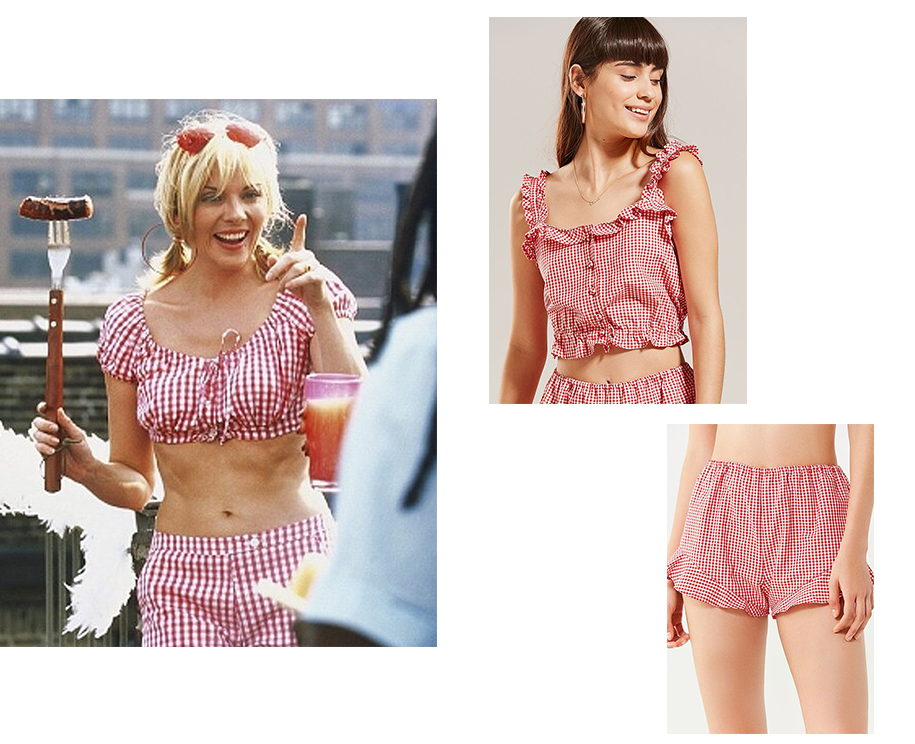 But it was Samantha’s love of color that really told her story. While some of us shy away from bright neon colors, Samantha mixes them. It’s a look that only the bold and/or a tube of Maybelline mascara can pull off. 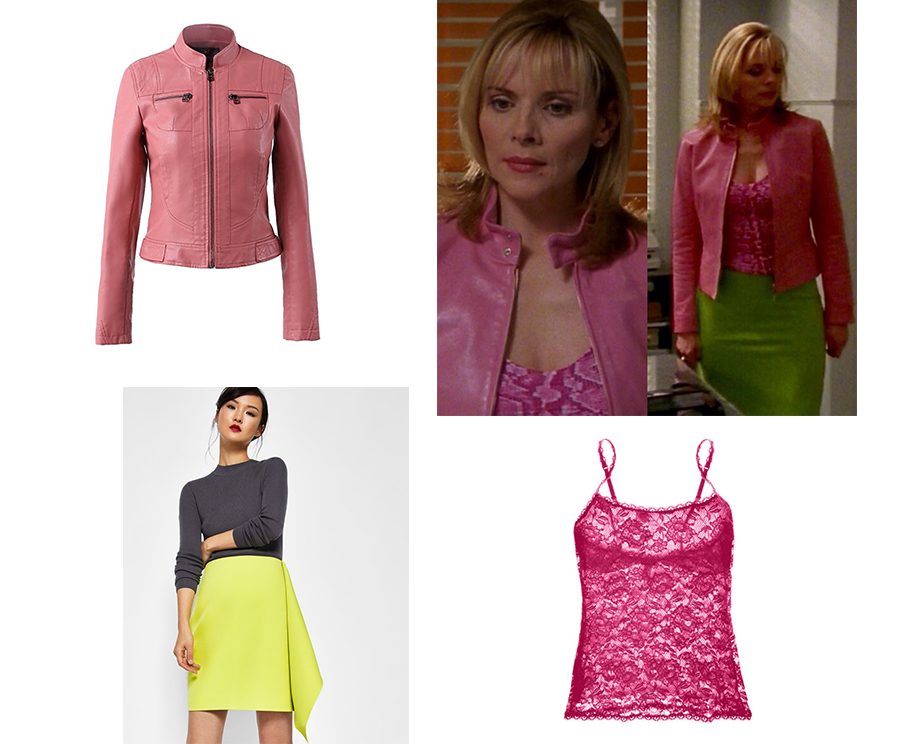 When the show originally aired, Miranda’s style was, let’s say, less appealing to a broad audience than the other women in the foursome. But, looking back on the show 20 years later, Miranda’s wardrobe has probably aged the best. Miranda is a 2018 fashionista!

At the time, outfits like her oversized overalls, puffer coat, dad hat, and Adidas said, “I’m a hard-working lawyer who just wants to be comfortable when I’m off the clock.” Today, it’s a look we wouldn’t be surprised to see a Jenner or a Hadid wearing. 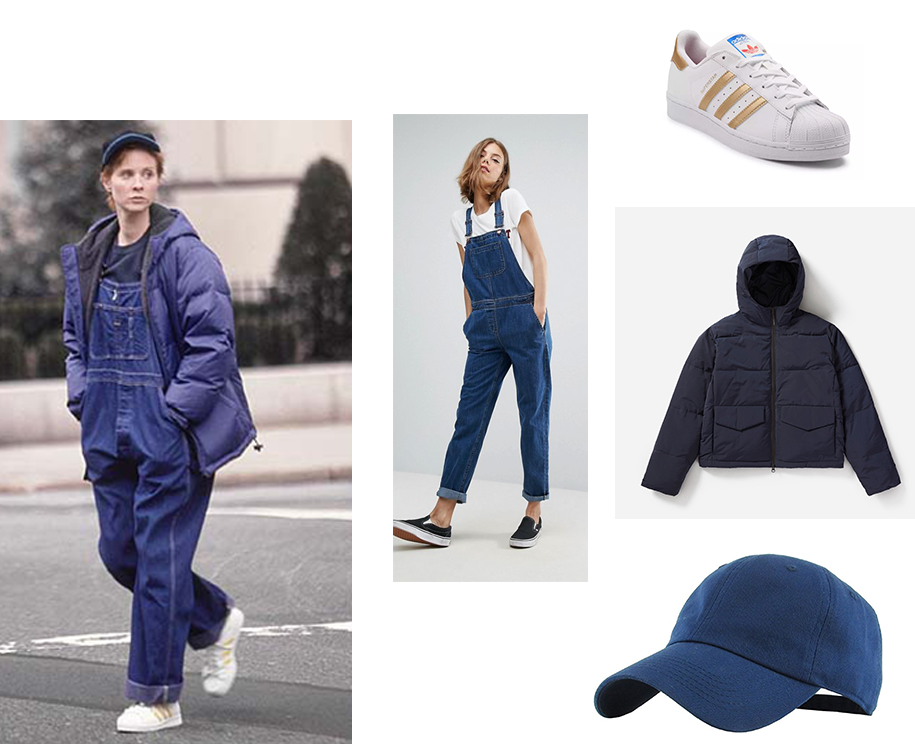 Then there were her work looks. As an female attorney, it was important for Miranda to project a powerful image but in a practical way. Her androgynous look was ahead of its time. 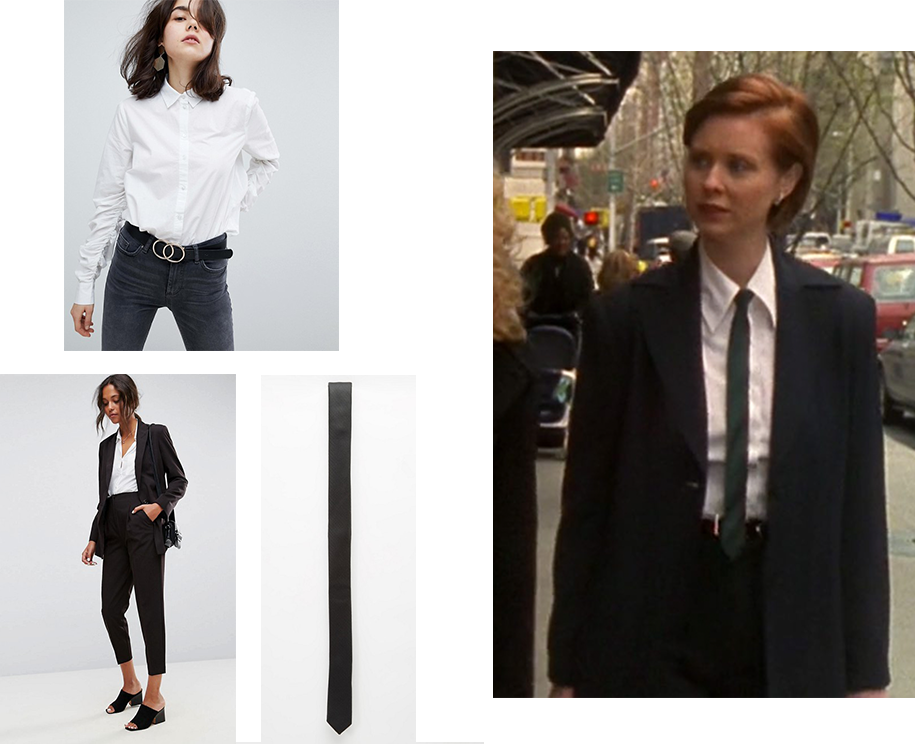 If Miranda’s style was of today’s time, Charlotte’s hearkened to a New England yesteryear.

If you close your eyes and picture a croquet match sponsored by Ralph Lauren, you’ll understand. 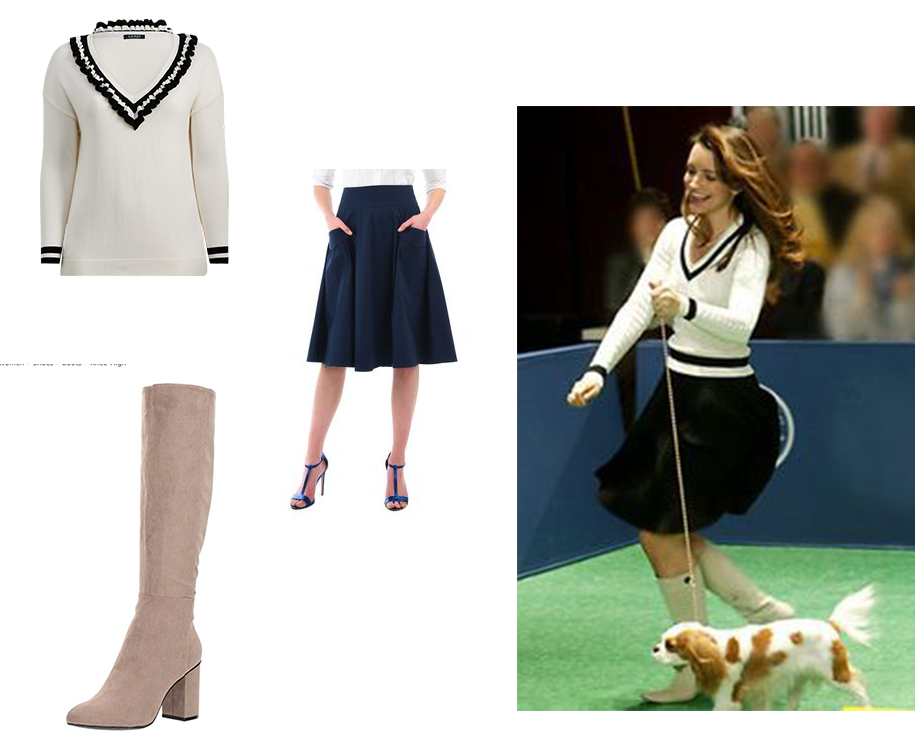 But Charlotte’s style wasn’t always about being polished. She used her clothes as an armor. She dressed to feel powerful in times that she didn’t feel her best.

In season 6, after having a miscarriage, Charlotte decides not to go to Brady’s first birthday party. But, after watching an E! True Hollywood Story about Elizabeth Taylor, Charlotte gets dressed up in a classic pink dress, which gives her the strength to face the day, move forward, and be there for Miranda. 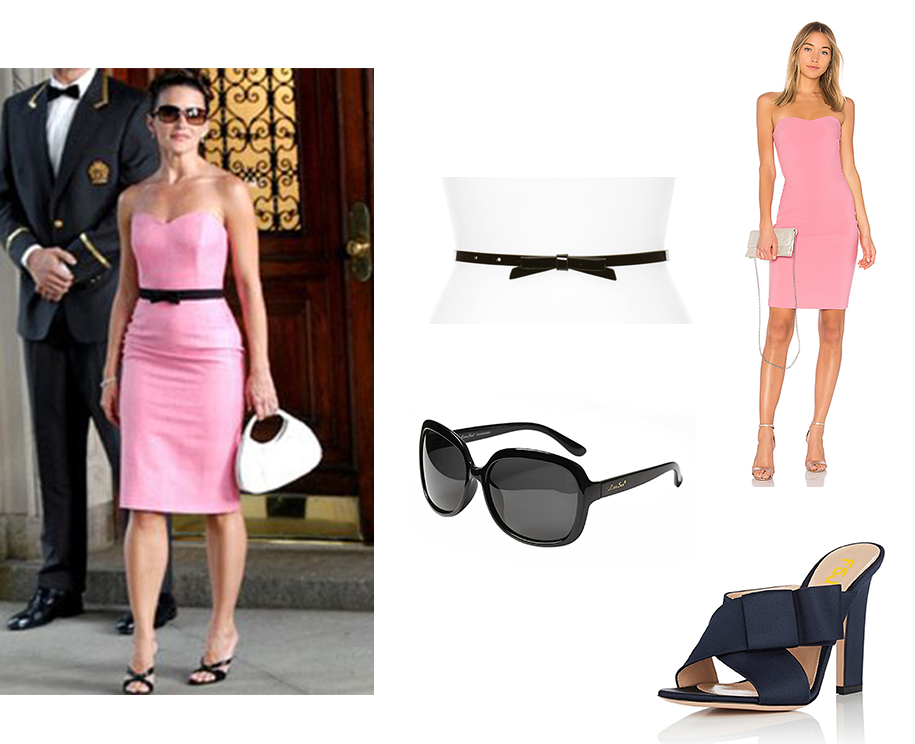 From the opening credits shot of Carrie Bradshaw in that tutu, audiences knew they were seeing a fashion icon. And, as any true fashion risk-taker will, Carrie has as many “what was she thinking?” outfits as trend-starting looks.

Chelsea Fairless and Lauren Garroni created the Instagram account @everyoutfitonsatc to celebrate the timeless and iconic looks from the show, the outfits that haven’t aged so well, and the sartorial choices that we can all agree were never a good idea. We asked them to share their favorite Carrie looks.

“My favorite look on Sex and the City is the the vintage asymmetric Zandra Rhodes dress that Carrie wears to the faux Marina Abramovic performance piece where she meets Aleksandr Petrovsky,” says Fairless. “Quirkiness is integral to both Carrie and Zandra’s personal brands, so this pairing makes sense. I’ve been coveting this dress since the episode first aired.”

“If you have the resources to by top-shelf vintage, by all means do it! Matches is now selling reproductions of Rhodes’ most iconic designs, although people with tighter budgets can easily find great printed 70’s-era dresses on eBay or Etsy for a fraction of the price,” she says. 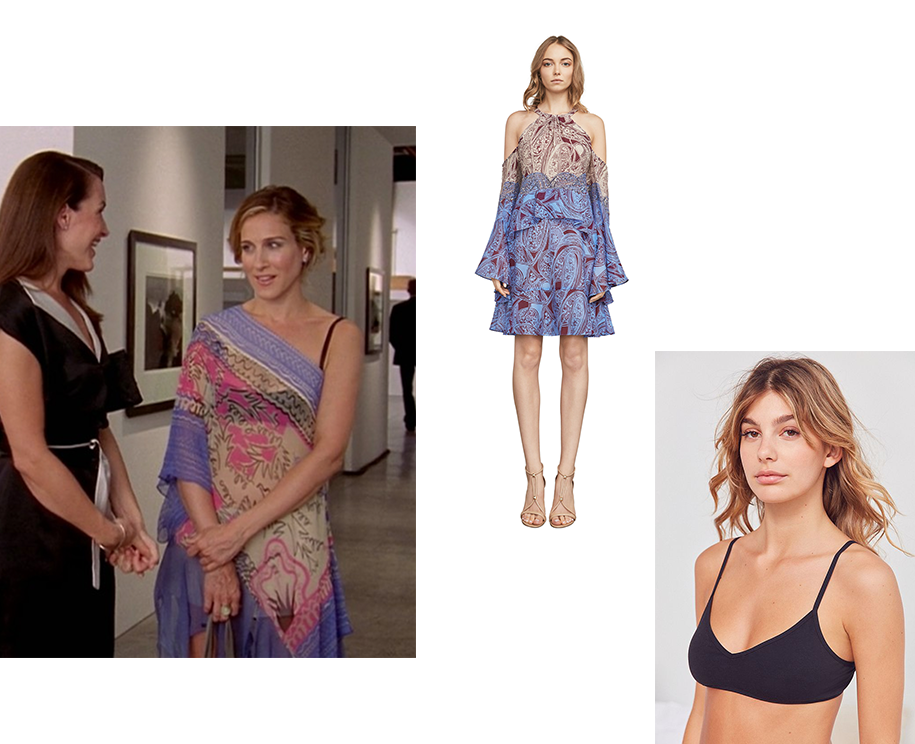 “My all-time favorite look is the Stella McCartney-era Chloe horses dress from the episode where Carrie goes to the opening of Tao with her ADHD Jazz musician boyfriend,” says Garroni. “The reason I love this outfit is she’s not actually wearing a dress—on the runway it was presented as a coat—but opened up under a vintage petticoat it’s breathtaking. The unexpected is an essential element of Carrie’s style, as well as her mixing high and low elements. The nude bra that looks like it’s from the clearance section of Macy’s just kills me.”

“There is a whimsy and fancifulness this outfit brings that is desperately needed in this dreary world. Also, the idea of repurposing a coat to create a Hubert de Givenchy-esque gown seems practical and impractical at the same time, which is an avenue I strive for when dressing daily,” she says. 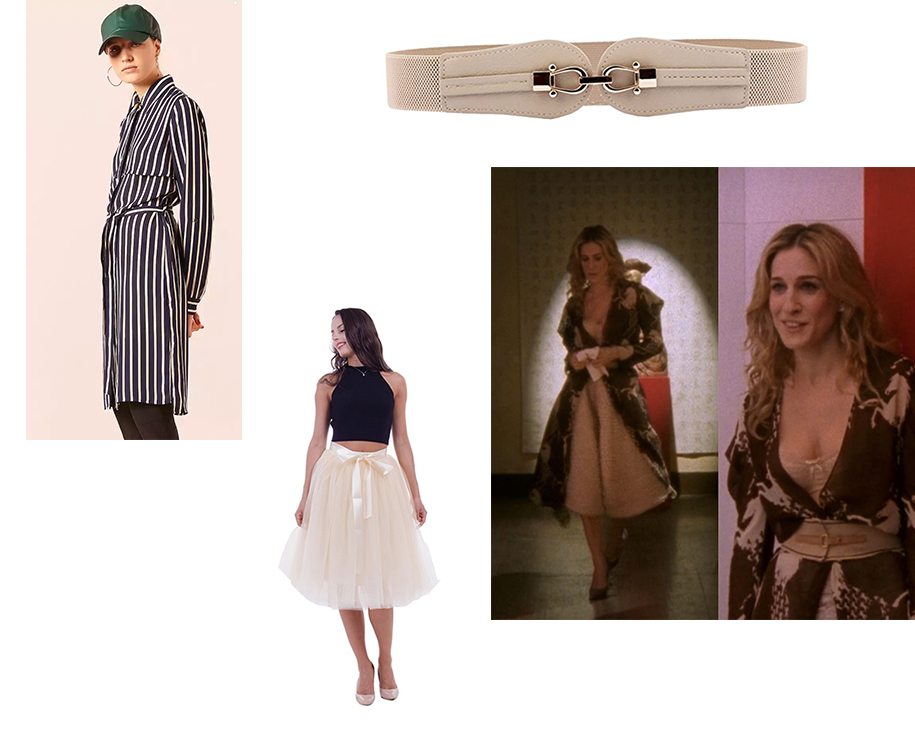