The Problem With “Correctile Dysfunction,” Summed Up In 8 Tweets

Though the phrase “correctile dysfunction” is not a new one, this alternative expression for the well-worn (and unfortunately, oft-needed) term “mansplain” has resurfaced. And Twitter is loving the revival. While some dudes love to hate the term “mansplaining,” there’s no denying it’s still an epidemic plaguing timelines, classrooms, and workplaces worldwide.

And if you had any questions or qualms about whether or not mansplaining was a thing of the past, even after the advent of this super helpful flow chart to help people check themselves, I just wanted to let you know that the dysfuntional correcting keeps on rolling in.

I have had more than one male colleague sincerely ask whether a certain behavior is mansplaining. Since apparently this is hard to figure out, I made one of them a chart. pic.twitter.com/7DZ1RTrB3R— Kim Goodwin (@kimgoodwin) July 19, 2018

The first recognized use of the term correctile dysfunction occurred back in 2006, when it described the act of instantly jumping on the keyboard to point out another person’s spelling error. In 2011, the phrase was used as a more collegiate term, applied to those who often turn in assignments so closely to the deadline they have no time to proofread.

And around 2012, the meaning shifted once again to describe misunderstandings sparked by AutoCorrect. But in 2017, the real shift happened. Addiful took to Twitter to propose adopting the term to describe mansplaining, which, as other Twitter users have noted, is a nice gender-neutral alternative:

In a perfect (or slightly less obnoxious) world, we wouldn’t even have to discuss this terminology because men would stop rushing to provide their unprovoked “well, actually”s altogether. But alas, that day has not yet arrived.

Here are 8 tweets that perfectly illustrate the problem with correctile dysfunction:

Dudes with correctile dysfunction are just too darn dreamy 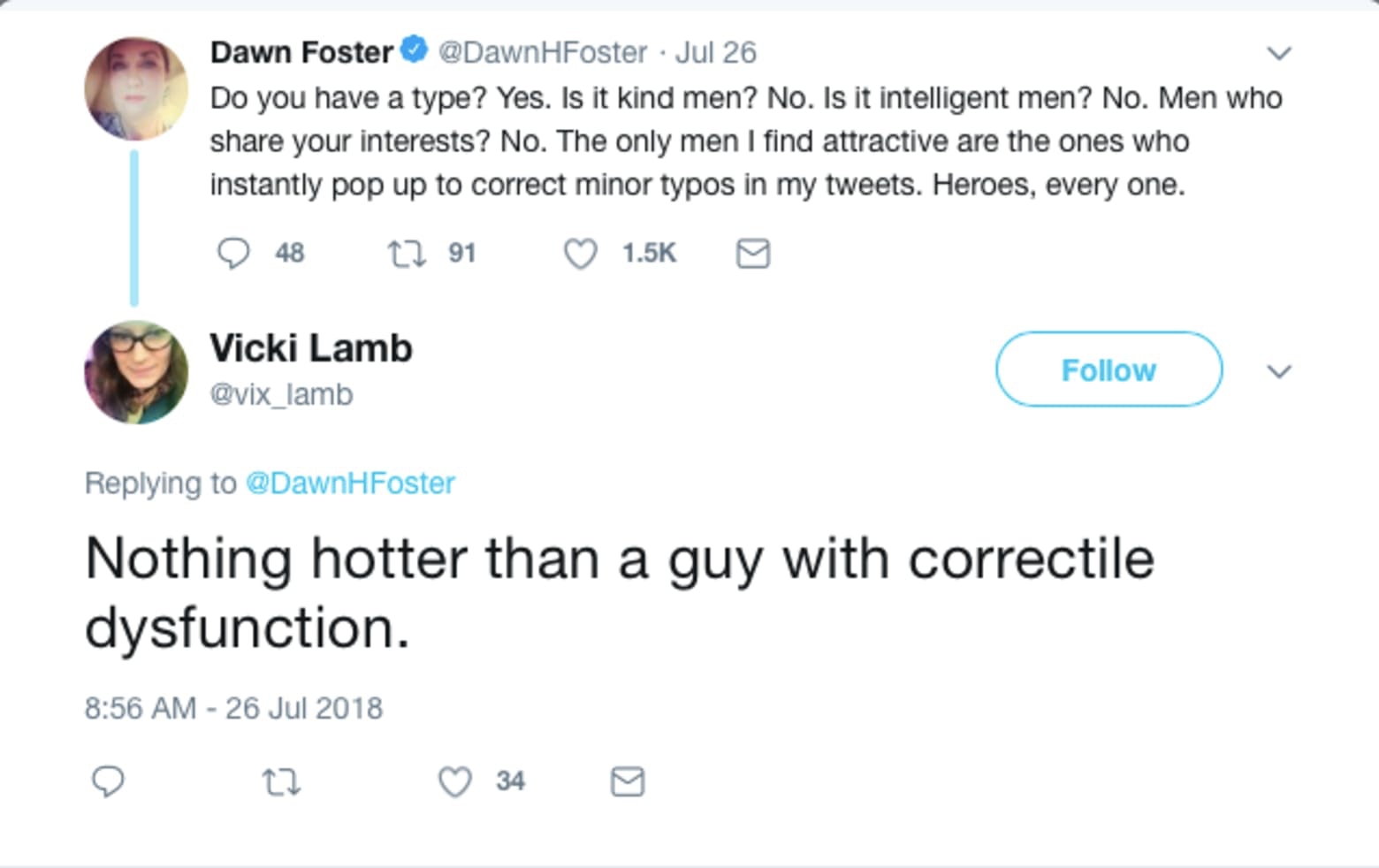 Girls just wanna have fun! And correctile dysfunction just wants to ruin it…

Men crashing into your mentions to point out a minor inaccuracy in a joke is called correctile dysfunction — The Governor (@PRHRoy) March 13, 2018

An older man sitting at the next table @ Blue on Water overheard me ask the bartender about a beer he’d just served me and provided a history lesson about I.P.A. (I was wearing my @BrouwerijtIJ IPA t-shirt but I’m #JustAGirl so it was safe to assume I needed beer #mansplained.)— 🍺Jennifer Mugford🍺 (@jmugford) July 23, 2018

When you start your own company, but you still can’t get the mic back

I was just at an event last night in Milan where a female CEO spoke 30 seconds and her investor #mansplained 1 question for 10 mins. My thoughts — is there a #takebackthemic movement? Can we start one? I just wanted to politely encourage the moderator to take it back!— Kimberly Afonso (@kimberlyafonso) July 25, 2018

Being good at your job clearly requires time travel

Oh, you have a PhD in literature? Great. Are you sure you know these fundamental elements of literature?

I only heard it yesterday but I’m really liking “correctile dysfunction” as a replacement for mansplaining— Aaron (@smHttr) July 26, 2018

What happens to #womeninscience ? #harrasment #mansplaining #bullying bad managerial behaviour #hierarchy #men at top positions, show of power etc.. Personally I find it hard to work forsomeone I do not respect. What made you leave science? #correctiledysfunction— Dr. Sara El-Gebali (@yalahowy) May 24, 2018

But that’s honestly not even the worst part. It’s also just flat-out annoying

The Know it all #CorrectileDysfunction is strong with this one today. Joy pic.twitter.com/vrlsMsdVCy— Kelly Quinn (@Frostysorigin) June 30, 2017

This piece by Kayla Heisley originally appeared on Fairygodboss.