Warning: A few light spoilers ahead.

Most nights, when I was growing up, my family ate dinner together—with the glaring exception of my father, who almost never joined us on weeknights. At the time, it made me sad because we rarely got the chance to catch up with him, so I found myself sharing more with my mom and leaving him out of so many discussions.

As I grew up, I realized that my dad wasn’t missing from those dinners because he didn’t want to join us. It was because he couldn’taffordto be there with us.

A talkative man with a heartwarming smile, my dad fled Vietnam by boat under treacherous conditions — he didn’t know whether or not he’d survive. But he did. When he finally landed in New York in 1978 at age 19, he lived in a one-bedroom apartment in the Bronx with three other refugees. After only two weeks in the city, his apartment was robbed. Fortunately, as my dad so often likes to tell me, the burglar only stole some old clothing pieces and a boombox.

“It’s not a unique story, but that’s part of what makes it so powerful.”

My dad didn’t stay in New York City for long; he learned through a mutual friend that his girlfriend from Vietnam had also escaped, and had recently landed in L.A.

Knowing she was still alive, my father was determined to make the trek west. He worked as a busboy at a French restaurant in Manhattan, saving enough money to reunite with my mom a year later.

In L.A., my dad registered to attend Pasadena Community College, but because he needed to help provide for his parents and siblings, he never had the chance to earn a college degree, and instead focused on finding work. He hustled and found jobs where he could, working at a photocopy center in Hollywood and then an Asian supermarket in San Gabriel before landing at a downtown L.A. photocopy center where he worked long hours as a manager. He often returned to our home in Rosemead late into the evening when my brother and I were already fast asleep, and he was often up and out of the house before we woke in the mornings. 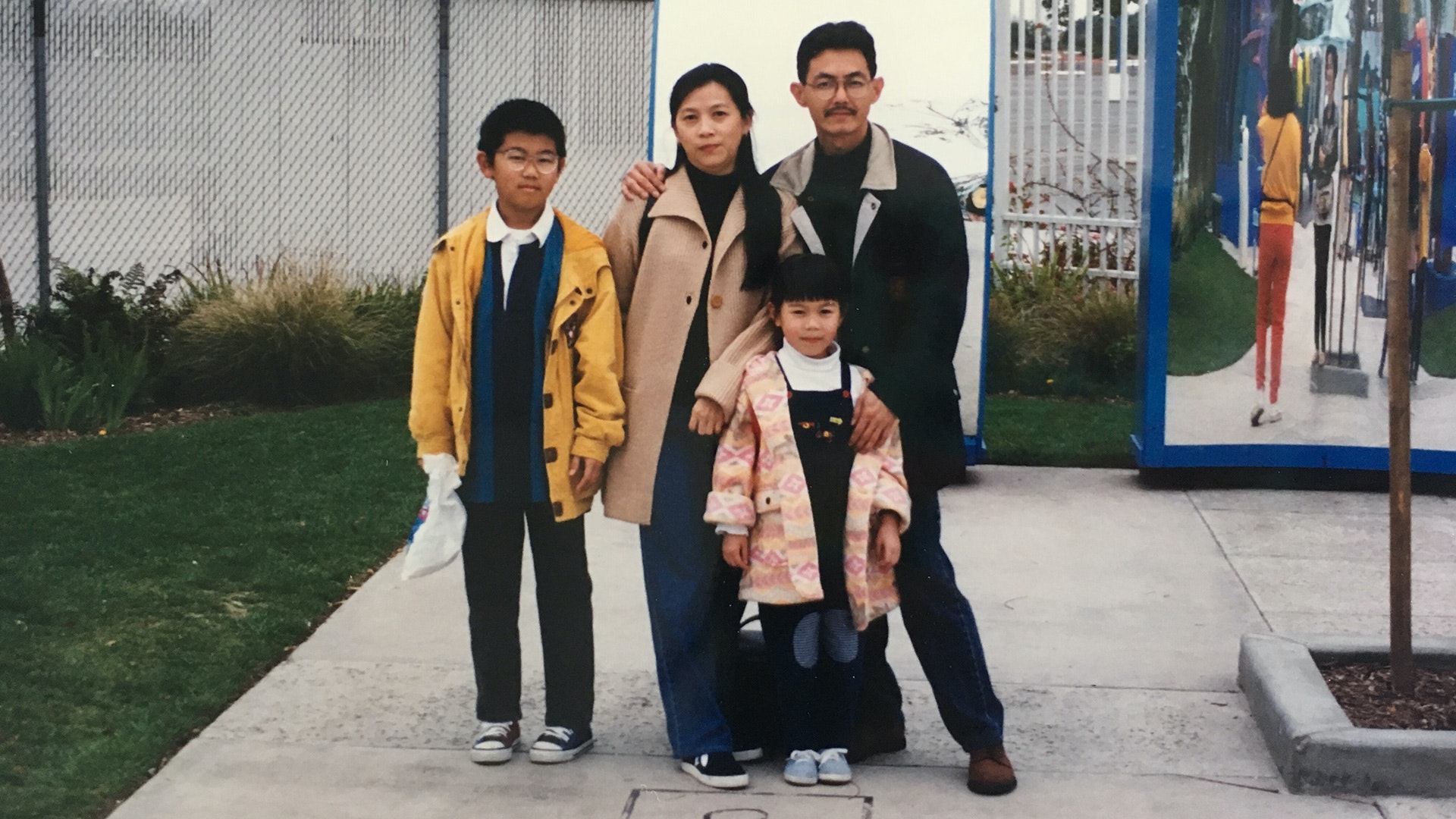 It’s not a unique story, but that’s part of what makes it so powerful. My dad worked long hours to cover the things my brother and I mostly took for granted while we were growing up: To pay our monthly rent. To pay for my brother’s Tae Kwon Do lessons. To pay for the tickets and take me to my first live concert (NSync forever). Working that job, he sacrificed time at home with our family, but it allowed him to provide a comfort for his kids that he didn’t get to experience when he first arrived in the US.

I didn’t see that at the time, but somewhere along the way, I realized that what my father did every day involved sacrifice—for me and my brother. The clichés about immigrant parents having unreasonable expectations and projecting all of their own hopes and dreams on their children comes from that very real place of what so many parents had to give up to support their families—both here and abroad. It’s the idea of deferring your own dream to realize something greater for your children, and that’s a beautiful thing.

“It’s the idea of deferring your own dream to realize something greater for your children, and that’s a beautiful thing.”

Perhaps that’s why I sobbed silently during a vulnerable scene in Jon M. Chu’sCrazy Rich Asians(in theaters now). The movie is spectacular, and a powerful example of Asian representation in Hollywood. But that’s not what moved me to tears—it was something much more personal.

This moment finds a heartbroken Rachel Chu (played by Constance Wu) seeking solace in her single immigrant mother Kerry (Tan Kheng Hua). Rachel has learned some of the secrets from her mother’s past through a cruel revelation and some invasive private investigator work, at the hands of her boyfriend’s disapproving family. Processing this new information and reeling from a breakup with said boyfriend (Nick Young, played by Henry Golding), Rachel can’t manage to get herself out of bed until her mom flies across the globe to remind her of her own strength. In the process, she shares a story of abuse, of escape, and of hiding the painful truth and walking away from a loving friend to protect her child.

When Wu’s character apologizes for what her mother has experienced, her mom responds:“Don’t be sorry. You listen to me: Everything that happened in my past life is the reason why I got you.” Cue the waterworks. That line gutted me.

Her sacrifices feel natural and essential—not like something that ever merited an apology. For her, as for so many families and parents leaving their homes in search of a better life for their children, life takes on purpose in ensuring that the next generation has more. It’s a narrative I’ve heard so many times, but in that moment, it forced me to think. It left me wondering what else— in addition to driving me around to various school events, paying for my dance team uniforms, and dealing with my teenage angst—my parents had done, and had given up, in order to afford me the life I have now: that of a college-educated journalist living in L.A., able to pursue a career filled with equal parts uncertainty and opportunity.

And that’s the magic ofCrazy Rich Asians. It’s a thrilling, exuberant rom-com, filled with beautiful people in impossibly expensive clothes, inhabiting rarified spaces accessible only to the wealthiest among us. Based on the 2013New York Timesbestseller by Kevin Kwan, the story is just as much about Rachel and Nick as it is about name-dropping designers and showcasing the over-the-top glamour of a certain kind of life in Singapore.

It’s groundbreaking for its representation—the first Hollywood film featuring an all-Asian cast since 1993’sJoy Luck Club, 25 years ago. But at the same time, it’s built to feel unrelatable and voyeuristic. And in less capable hands, it might have turned out that way. But the subtle touches that make it human are what make it so deeply relatable—and enjoyable.

“The story is just as much about Rachel and Nick as it is about name-dropping designers and showcasing the over-the-top glamour of a certain kind of life in Singapore.”

The movie does a beautiful job surfacing facets of the immigrant (and human) experience that are constant. Because parents constantly make sacrifices for their children. They are happy to do it, and that’s why it’s easy to take these sacrifices for granted as a child. In the movie, this is the case with Rachel’s mom, who ran away from China in search of a better life in America for herself and her daughter. It’s also the case for Nick’s mom, Eleanor, who let her son live with his a ma (grandma in Chinese) because she wanted Nick to be well loved by a mother-in-law who didn’t approve of her.

And it really is a universal theme that so many of us can relate to. After the release ofMaster of None’s highly-praised “Parents” episode, co-creator Alan Yang shared in a 2015 interview withSalonthat a diverse group of viewers had similar reactions to the personal storyline. The episode placed a spotlight on the main characters’ immigrant parents, telling similar stories of sacrifice in service of a better life for children. And ultimately, Yang explained, “It’s really not just a story about immigrants. It’s a story about being grateful to your parents, no matter what their background was. Regardless of where your parents are born, chances are they made some sacrifices for you, and they took care of you, and they worked really hard.”

Whether they’re from the upper echelons of Singapore society or from the city of Cho Lon in Vietnam, this holds true. And even now, as an adult, nothing has changed. I’m currently planning a wedding, and at every turn my dad will ask how he can help—from offering to drive me to look at dresses to arranging stays for my relatives visiting from abroad—when we meet for lunches.