Egg Freezing And Efficiency: What Happens When Tech Paternalism Takes Over Your Life?

When it comes to the “corporate benefit” of egg freezing, women are faced with an alarming paradox of choice—the procedure’s at once a privilege and an often-coercive, precarious process. So when Facebook’s Sheryl Sandberg told a company-wide Q&A audience, “Feel free to tell someone no one told you to freeze your eggs,” product manager Bo Ren was left confused.

I thought I had found my dream job: I was working in SF at Facebook, as a product manager at 28. I had paved my way down this perfect path as a liberal arts major. This was almost unheard of in an industry where engineers, brogrammers, and Stanford CS majors reigned supreme. On paper, and from the outside, everything looked great.

At cocktail parties, when acquaintances introduced me to strangers, I was “a Facebooker” first, Bo second. I flew business class. I projected confidence and success. Privately, though, I was scared and anxious, and I increasingly felt like I was living someone else’s life, moving through the intense, 12-hour workdays on autopilot.

Two weeks before turning 28, my boyfriend and I broke up. He was a nice guy, and wholesome, but from the very beginning I’d had a feeling it wasn’t right. Yet I also felt immense pressure from friends, family, and society at large to “make it work” before I turned 30, and so I ignored my doubts. I expected our parting of ways to go down like most breakups do, with friends rushing in to console and commiserate in the aftermath and then, later, to congratulate me on my newfound singlehood once I’d moved on. Instead, I faced an onslaught of unsolicited advice.

“Have you thought about freezing your eggs?” asked a mentor at Facebook. “Your eggs are the freshest right now.

“I wish I had frozen mine before I turned 30,” she said wistfully, as she sipped at her Saint Frank coffee in the Frank Gehry-designed Building 20.

In late 2014, both Facebook and Apple extended egg freezing as a health benefit to their employees. At Facebook, it was arranged via in-network coverage with health insurance provider Aetna. Specifically, the program offered 10 percent coinsurance (after deductibles) on bundle treatments from fertility benefit company Progyny. From memory, the plan covered $10K towards egg freezing. Employees paid for annual storage fees.

With so many perks and invitations to outsource the “adulting” parts of my life, I felt like I’d won the lottery. Campus was the tech Disneyland. All I had to do was devote myself to work and everything else would be magically taken care of. Aside from going home to sleep each night, often catching the last shuttle at 10pm back to the city, I basically lived on Facebook’s campus. The job was all-consuming—a mode of existence more than a role.

During the weekly Friday Q&A at Facebook, a female employee asked Sheryl Sandberg for guidance on how we should respond to the press about the company’s newfound egg-freezing perks. The press was making it sound like Facebook was pressuring its female employees to freeze their eggs in order to enable them to work longer and harder.

Sheryl replied, “Feel free to tell someone no one told you to freeze your eggs.” Hearing this made me feel empowered but also confused and conflicted. No matter how accommodating and neutral-sounding Facebook’s stance was on the matter. Part of me did feel pressured and guilty for not taking advantage of this company perk, as if letting my potential fertility go to waste. 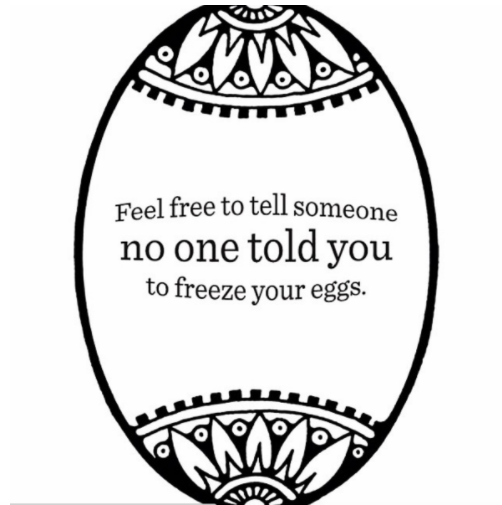 A poster from Facebook’s weekly Micdrop, an internal group of Facebookers that post notable quotes from staff Q&As with executives around campus as a culture-building exercise.

In behavioral science, we use the words “paternalism” and “choice architecture” to explain how systems can nudge us towards choosing something without our full, conscious awareness. The way a decision architect creates options encourages the selection of one option over the other, e.g. a $40 bottle of wine sitting next to a $200 bottle on the menu encourages selection of the former.

The hiring marketplace in tech has become highly competitive, and to reel in top talent companies have taken to piling on the signing “perks.” The downside to all the shiny extras? It’s huge. More and more of our personal decisions and life planning choices are being unwittingly shaped by the paternalistic systems that supposedly are in place for our benefit.

As a product manager trained to be ruthlessly efficient, to optimize any situation, to “move fast and break things,” as Facebook used to put, shouldn’t I also optimize my life? Egg freezing and deferring my biological clock seemed like a logical choice. I was the only Chinese girl in my Portland Joy Luck Club circle who was unmarried.

Christmas parties were agonizing because the “mamafia” (a.k.a the Chinese mob of mothers) would inevitably ask me “Do you have a boyfriend? Why aren’t you married?” No matter how much I accomplished in my career, no matter how many articles I published, or conferences spoken at, I still felt like the black sheep in my community.

Could egg freezing absolve me from doing the one thing every woman feels pressured to do? Could it insulate me from the Chinese mamafia’s scrutiny? Could I perhaps defer my anxiety and uncertainty for another day via my workplace wellness program and buy inner peace like the chic millennial boutique clinics advertised? Could I find more freedom in living and dating, knowing that I didn’t have the pressure of a biological timeline? These were all the questions I mulled over.

One important question, I neglected to ask was “Will egg freezing work for me? What do Iwant?” Instead of leaning towards what I should do, I needed to tap into my inner beliefs, values, and needs. It’s easy to get caught up in the world of “shoulds” and lose yourself.

As modern women, we are bombarded with thousands of ads on social media. Ads for egg freezing that play into ageist ideas and “biological clock” fears are no exception. 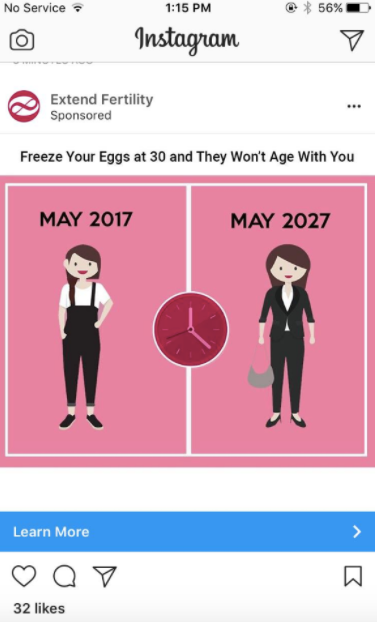 An ad targeted towards me and my friends on Instagram.

We are told we should take prebiotics and probiotics to boost our mood and make our skin glow. We’re told, “Don’t wait too long to have children because you’ll become infertile after 35.” We’re told to “lean in” and not worry about dating while working 60 hour weeks. We’re told to juggle an Instagram-worthy life, a daily commute on the 101, and a demanding career all while finding our soulmate on Tinder one swipe at a time.

We’re told we can have it all and then told we can’t have it all. No wonder millennial women suffer from cognitive dissonance, anxiety, impostor syndrome, and a paradox of choices. In the words of Ali Wong, “I don’t want to lean in…I just want to lie down.”

Against the cacophony of Instagram ads and corporate paternalism, we’re also implicitly nudged into freezing our eggs, especially when it’s offered for free.

Many of my friends have frozen their eggs and I respect their decisions. However, I ultimately came to the conclusion that this would not work for me. After consulting with my best friend from college, who has a PhD in genetics, it became clear to me that egg freezing was not a sure thing, but rather just one variable in a long string of variables that you change when it comes to family life planning.

The technology behind egg freezing hasn’t been around long enough to prove its long-term safety. In fact, the American College of Obstetricians and Gynecologists (ACOG) and the American Society for Reproductive Medicine (ASRM) do not endorse the use of egg freezing to defer childbearing.

What if I cause permanent damage to my body in order to exercise an optionality? Also, what is the integrity of the egg from long period of anti-freeze? What does it mean that I have many friends who have frozen their eggs, but none who have retrieved their eggs and gone through successful IVF?

If I’m offered free egg freezing today, shouldn’t I also be offered a surrogate mother once I’ve been promoted to executive?

These were all the questions that caused me deep anxiety and pause in moving forward with egg freezing.

Ultimately, I chose against making a fear-based decision, even if it was covered by my company. I’m relieved to learn that I’m not the only one who felt pressured amongst my friends and coworkers to freeze their eggs.

It’s confusing to be told, “Be a modern woman, but also don’t wait too long to get married or have children because biology is not an elastic timeline.”

I hope that as modern women navigating our careers and searching for love, we find the strength within us to tune out the external voices and tune in to that small voice inside of all of us. That intuition has always been there. It’s the small voice that guides you to trust life, face your uncertainties, and make your own decisions.

She is there and she is always correct. Do what feels right on your terms, frozen or not.

Bo Ren is an investor, product manager, and writer in NYC. She believes in humanizing tech and building a more diverse and inclusive future. She previously worked for Facebook, Instagram, and Tumblr. She is currently building a venture fund for underserved founders. You can find her on Twitter and Medium.