Examining “life admin” closely has led me to identify four key admin personalities. The basic divide is between Doers and Non-Doers. The Doers are doing it —​or at least trying to. The Non-Doers are not doing it and not trying to — not really.

Parsing things a bit further, we get four types. These are the Super Doer, the Reluctant Doer, the Admin Avoider, and the Admin Denier. Perhaps the names of these types resonate for you. Perhaps they bring to mind people you know.

The basic differences among the four personalities involve variations of action and feeling: whether a person’s basic orientation is toward getting admin done or not getting it done (the action element) and how a person feels about the state of admin in her life (the feeling element).

“In this culture, it seems, it’s hard to be a woman and not even know about admin.”

Many of us don’t fit neatly into one box, and our personalities can change across contexts or relationships. But before we know how to make the most of our “type,” we should get a basic picture of each character.

The Super Doer is on top of admin. She is the Wonder Woman who promptly supplies recommendations of every kind—doctors, real estate agents, hairstylists, snow removers—​to her family and many friends (and even strangers), plans gatherings and trips for everyone, and remembers (or has a system for remembering) birthdays, even while successfully managing her demanding job or household or both.

The Super Doer is Rosa, who has always been a planner, unlike her parents and siblings. The first person in her family to go to college, Rosa has been translating for her immigrant parents from the age of eight, when the family moved to this country. “Planning and scheduling just comes naturally to me.” Growing up, Rosa did her own admin, such as completing her FAFSA forms for college financial aid, as well as doing admin for her parents.

She went to their doctors’ appointments to ensure they understood their medical decisions, and when money was tight, she created budgets. She continues to advise her parents on financial and other matters and looks forward to moving back to her hometown after finishing her postgraduate studies so she can “take the reins again.”

One of my favorite Super Doers is a successful woman who was skeptical about the topic of this book. On first hearing what I was writing about, she remarked, “I don’t really understand this book; it’s like writing a book about air.” I envy this woman. To her, admin is just the air of life, freely breathed in and out alongside everything else.

Breathing does not come so easily for the Reluctant Doer. At least, not around admin. The Reluctant Doer is more likely to experience admin as an obstacle, something he has to contend with but really doesn’t want to be facing.

The Reluctant Doer feels that the to-do list is endless—and that she is always several steps behind. No major disasters befall her or her family through admin failures. The important stuff generally gets done—she is a Doer, after all​—but sometimes it’s late, and often it’s last-minute. Livia put it this way: “I always feel like I’m not doing enough, but I rarely feel that it’s a complete disaster. I feel like I’m always sort of managing but not completely managing.”

The Reluctant Doer might well consider outsourcing some of the admin. But who has the time for all the admin involved in finding help with admin, even if he can afford it? As my well-off interviewee Saul remarked about why he doesn’t have a personal assistant, “If there was a button I could push and have such a person, I would do it.”

“Another term for learned incompetence is strategic ball-dropping.”

For many Reluctant Doers, admin is a site of relationship friction. This is a person who really doesn’t want to be doing so much admin but realizes it has to get done and fears no one else will do it. One common stereotype is the heterosexual marriage in which the wife is the Reluctant Doer because—she insists or he insists—​the husband just isn’t any good at admin. Some label this the “learned incompetence” of husbands: Is he really incompetent, or has he conveniently let things slide so she will take over?

Conversely, does she really believe he is incompetent, or is she less reluctant than she admits? Another term for learned incompetence is strategic ball-dropping—​if you drop the balls and your partner keeps picking them up, you’ll learn to keep dropping them.

The Reluctant Doer who is tackling admin for which she feels unqualified may add embarrassment to her frustration and resentment. Stephanie captured this well: “It feels like everyone else kind of has their life sorted out,” she said. “And I’m the one who’s just like floundering. . . That’s partly why my husband and I have a lot of conflicts. Because I’m always like, ‘I’m the flounderer; how can I be in charge of everything? You made me, the incompetent one, in charge.’ ”

Even Reluctant Doers who feel competent, however, may sense that they are not uniquely competent. There’s no reason why it has to be you, Rena pointed out, since anyone could do it. And so she finds herself thinking, “Why am I doing it?”

The Avoider is trying to escape admin. The Avoider sees admin out there, flying right toward her, and ducks. In the words of Chris, married father of a toddler, “I think it’s one of those things that​—​it’s like a sign of being a grownup. And I try to avoid anything that makes me feel like a grownup, and therefore avoid it.”

The Avoider is Diana who drove with her expired registration for nearly two and a half years. Diana leaves email unanswered and regular mail unopened. She has faced late fees and worse—​even years of delay in her professional licensing—​due to her admin avoidance. She generally thinks of this “stuff” as something she’s bad at.

“The Avoider sees admin out there, flying right toward her, and ducks.”

Vera, Saul’s fiancée, feels “guilty, kind of like constantly guilty.” She, like many Avoiders, feels shame over the consequences she’s faced for her avoiding. But not all Avoiders feel very bad. Some are just mildly guilt-ridden; these folks are often simultaneously grateful for whoever is getting their admin done, when someone else is.

Either way, the Avoider knows admin is a problem but either doesn’t want to or doesn’t know how to do anything to solve it.

The Admin Denier, by contrast, doesn’t think there’s a problem. The Denier is the free spirit who racks up credit-card debt. The Denier is also the successful professional who has always had someone—​an assistant, a parent, a spouse—​who takes care of all his admin, so he never has to see it or even really know about most of it.

After I explained what admin is, John told me, “But that doesn’t take any time at all.” I suggested that he must be well off enough not to have to submit health-insurance claims or use a pretax-dollar health account. Oh, no; he uses those. “My assistant has a spreadsheet that she uses to do all those things. Doesn’t take her any time at all.”

One typical difference between Deniers and Avoiders is that the Avoider often says thank you to whoever handles the admin. The Denier may say, “Why are you wasting your time doing this thing that I don’t think is important?”

Alice, who is the main admin Doer in a polyamorous household, explained the difference between her two partners: “My husband and I also live with my girlfriend, and my husband is really an Avoider and my girlfriend is really a Denier. And so he feels terrible about the stuff that he’s not doing that I help with.” And the girlfriend doesn’t feel bad? “A little bit. But much more of the ‘Eh, whatever.’ ” Alice’s relationships means triple the admin for her.

Of the Deniers I’ve met, more are men. In this culture, it seems, it’s hard to be a woman and not even know about admin. If a woman doesn’t do her own admin, she’s unlikely to be completely unaware that others are doing it for her.

So while there are female Deniers, the privilege of obliviousness is more often reserved for men, as well as some very fortunate young people. 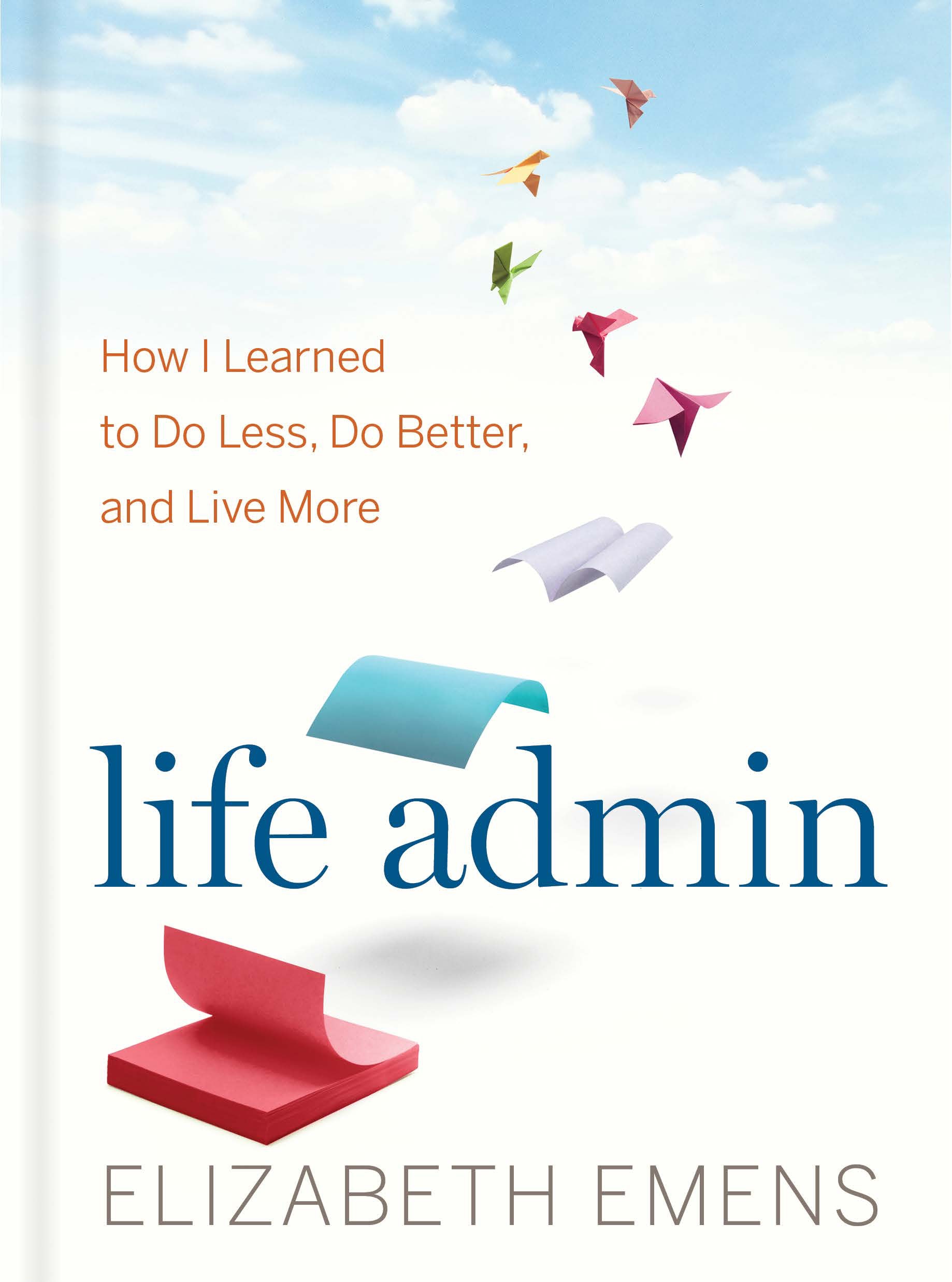