If you’ve ever stopped to imagine how busy the life of editor-in-chief is, you’d only be scratching the surface of what Alison Overholt’s day-to-day looks like.

As the head honcho at both espnW and ESPN The Magazine, Overholt has had a long and successful career in sports journalism and digital content strategy—with a side of professor-ing at NYU for the last five years.

She’s also the mother of Grant, her one-year-old son, and Maddie, her six-year-old daughter. While one might be tempted to assume she’s figured out how to manipulate the time-space continuum in order to fit everything in, it turns out she’s driven by the same thing that propels most successful people: Passion and hard work, in copious amounts.

Raised in Hong Kong, Overholt was an early and ardent sports enthusiast. After her mom tried and failed to keep her interested in ballet, then tap, then jazz, she eventually found the sport that would wedge itself inextricably into her existence (as well as capitalize on her teenage growth spurt): basketball.

But at the time, the option for Overholt to turn her passion into a career didn’t exist—the WNBA wasn’t formed until she was a senior in college, and as a Harvard student, she’d already signed on to the school newspaper instead of playing college ball.

Still, Overholt still credits basketball and her love of exercise as the things that have always helped connect her to people wherever she went. In college, she and a friend were the only two girls who played in pickup games, and when she later moved to DC, then San Francisco, then NYC, it was always the same: “Literally every time I moved to a new city, I made friends by playing pick-up basketball.”

After a brief stint working in public policy as a management consultant in DC, Overholt’s aversion to that kind of work drove her directly into the folds of journalism—specifically, Fast Company, a magazine with which she was obsessed. She threw all the money she’d saved at a five-week summer publishing course at Columbia. The director of the course eventually connected her to one of the co-founders of Fast Company.

Overholt landed a job as a staff writer there, and after that she landed her first editing gig at ESPN The Magazine, where she’s now at the helm over a decade later.

We caught up with Overholt recently to see what a typical day looks like for her and how she manages to keep her love of sports and exercise integrated in such a jam-packed schedule. 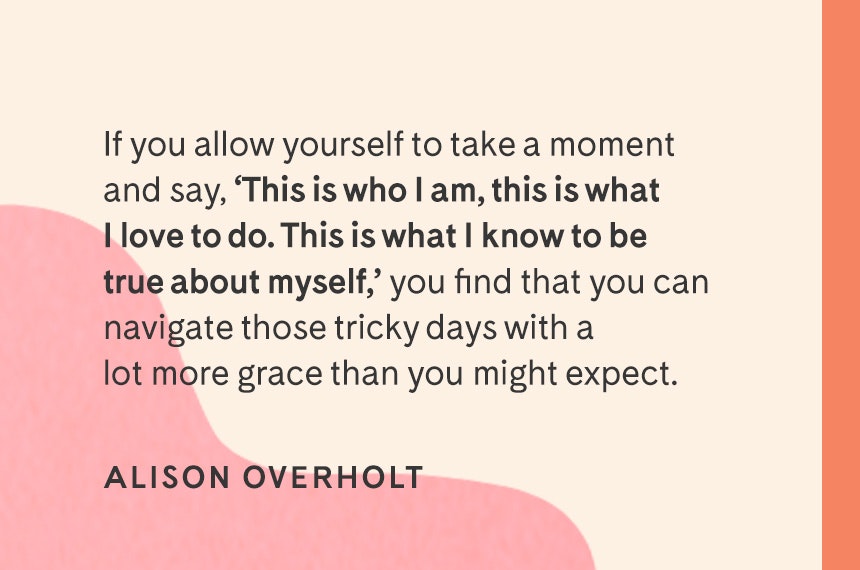 Better grab your sweatband for this one, because just reading her schedule is enough to make a person perspire:

5:30 a.m.My alarm never goes off anymore, because I have two young children who don’t understand that they should sleep in! Sometimes my son will sleep until 6 or 6:30 a.m., but on the days when he’s not up early, my daughter is. She’s six and she loves mornings.

7 a.m.Time for breakfast. We’ve been doing a lot of smoothies lately. I generally alternate between eggs or smoothies. I actually started a Daily Harvest subscription. I had one recently that was carrots, sweet potato, walnuts, dates, ginger, and cinnamon. I just threw some almond milk in there and put it in the blender, and it was incredible.

7:45 a.m.We try and get the whole family outside. We all walk down to the bus stop while Maddie rides her bike. The bus picks her up around 8:15.

8:30 a.m. My son goes to daycare right across the street from my office, so the next thing is to drop him off at daycare. I’m usually at my desk by 9 a.m., or a few minutes beforehand.

9 a.m. I try really hard not to have meetings straightaway, and to take that first hour to set the plan for the day. I’ll try and jump on anything that’s urgent that comes up from a news perspective or anything from the previous day that needs to be responded to from a business perspective.

10 a.m. The crush of meetings begins. Our magazine editorial meetings kick things off, and meetings carry me through much of the rest of the day.

12 p.m. Last year, I really struggled with a lot of days where I didn’t stop for lunch, which I realize was incredibly unhealthy. It was making me a really grouchy person. These days, I’ll try  bring lunch with me and I just bring it to a meeting. Other days, I try to book a break from 12 to 12:30 so I can at least run over to the cafeteria and pick something up.

4:30 pm. The last meeting of the day is usually a production meeting for the magazine, where it’s a check-in on the status of stories, pages, layouts—things like that. I try really hard not to schedule 5 o’clock meetings and instead take an hour and a half to say, “OK, what are the things that I need to be making sure are moving forward, from a project planning perspective? Are there things that people need responses from me on?” If I’m really lucky, I have time to do some thoughtful immersive work, as well.

6 p.m. I’ll try and leave the office so I can get home and have dinner with my family and actually see my kids before they go to sleep. We kind of joke that our household is like Jekyll and Hyde, depending on whether it’s football season or not. My husband is a sports writer, so during football season, the two of us are so busy that we start relying pretty heavily on picking up meals from Costco that can be thrown into the oven. Or else one of us will call in an order to P.F. Chang’s and I’ll pick it up on the way home. That kind of thing.

I go for a run a couple times a week and go to a class once a week, or the reverse. If I can get to two classes in the evening, I’ll run once a week.

7:30 p.m. After a big bottle, lots of snuggles, and a book, our son is generally completely asleep by this time. Our daughter follows suit soon after.

8:30 p.m. Back to work! It’s me and my laptop, sitting on the couch. During the height of all the sports seasons, my husband and I camp out on the couch and work while we’re watching games. It’s a chance for me to catch up on all my emails, read things that have come in, and jot down ideas for stuff that I haven’t had a chance to do during the day. One of the things that we’re trying really hard to figure out is how to carve out more “us” time. More “me” time, too.

11 p.m. In an ideal world, I’m heading up around ten. But it’s typical for me to have at least one night a week where I’m up really late, because there’s always some moment where there’s breaking news coming in. And then I’ll be checking my cell phone at 12:30 a.m. because I realize there’s something I forgot.

But at the end of a busy day, I really try to pause and take a breath. In those moments when you either doubt yourself or you feel challenged, it’s OK to pause to remind yourself about what you know about who you are. If you just allow yourself to take those moments, to return to that and say, “This is who I am, this is what I love to do. This is what I know to be true about myself,” you find that you can navigate those tricky days with a lot more grace than you might expect.