What Does Your Zodiac Sign *Really* Say About Your Money Habits?

Money is perhaps one the most essential necessities in life. We depend on cash and credit cards to buy groceries, pay rent, travel, communicate, and solve problems. Money makes the world go round.

However, often times, mismanagement can lead to serious issues, which can complicate our lifestyles—which is why it’s important to understand our personal relationship with money.

So…is your financial well being ~written in the stars~ as they say? Read below, to see how your zodiac sign relates to your unique relationship with money. 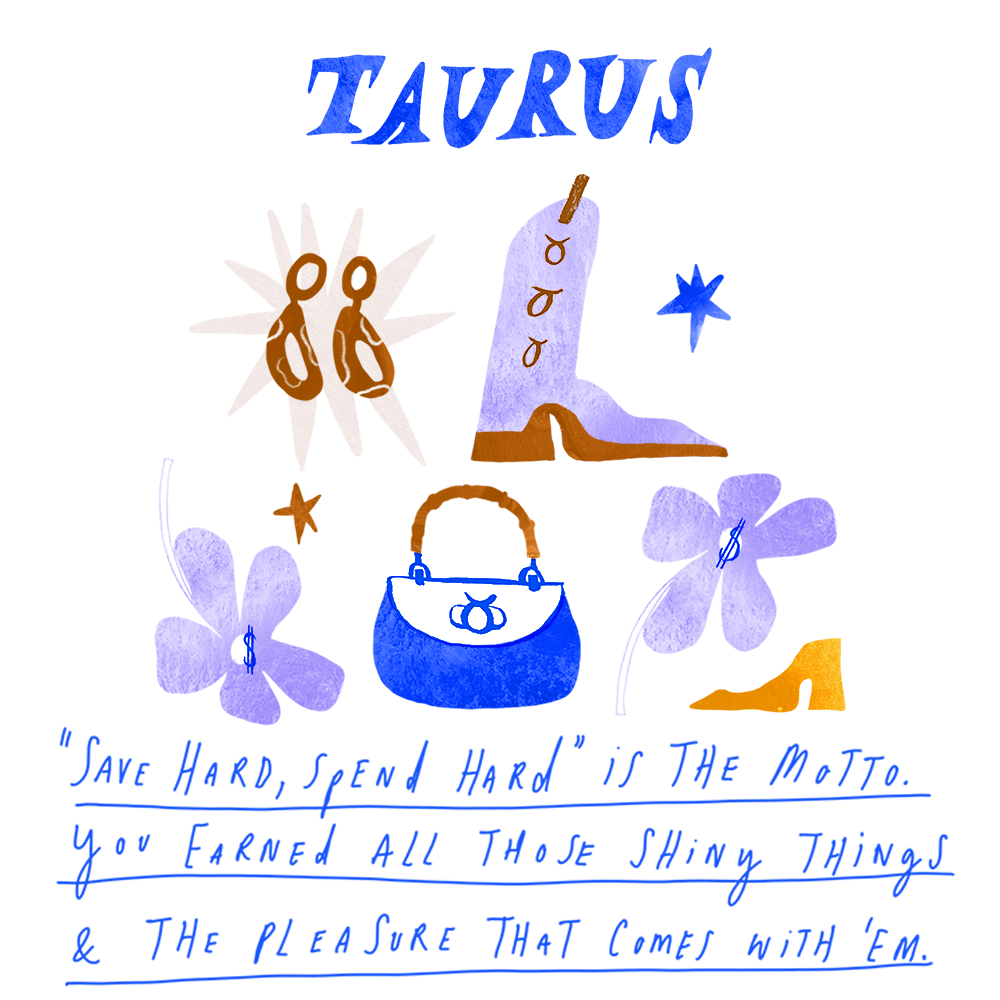 Ruled by Venus, Goddess of Money, the bull is one of the best money makers of the zodiac. A diligent worker, Tauruses are known to indulge in earthy pleasures and often splurge on luxuries as treats for their laborious work. However, this doesn’t mean their bank accounts will take a hit.

Tauruses are financial preservers, which allows their bank accounts to be lush with cash. Known to be pleasure-seekers, they actually spend money with caution, enjoying a little treat here and there (not as frequently as others think). After all, they earned it through their super hard work. 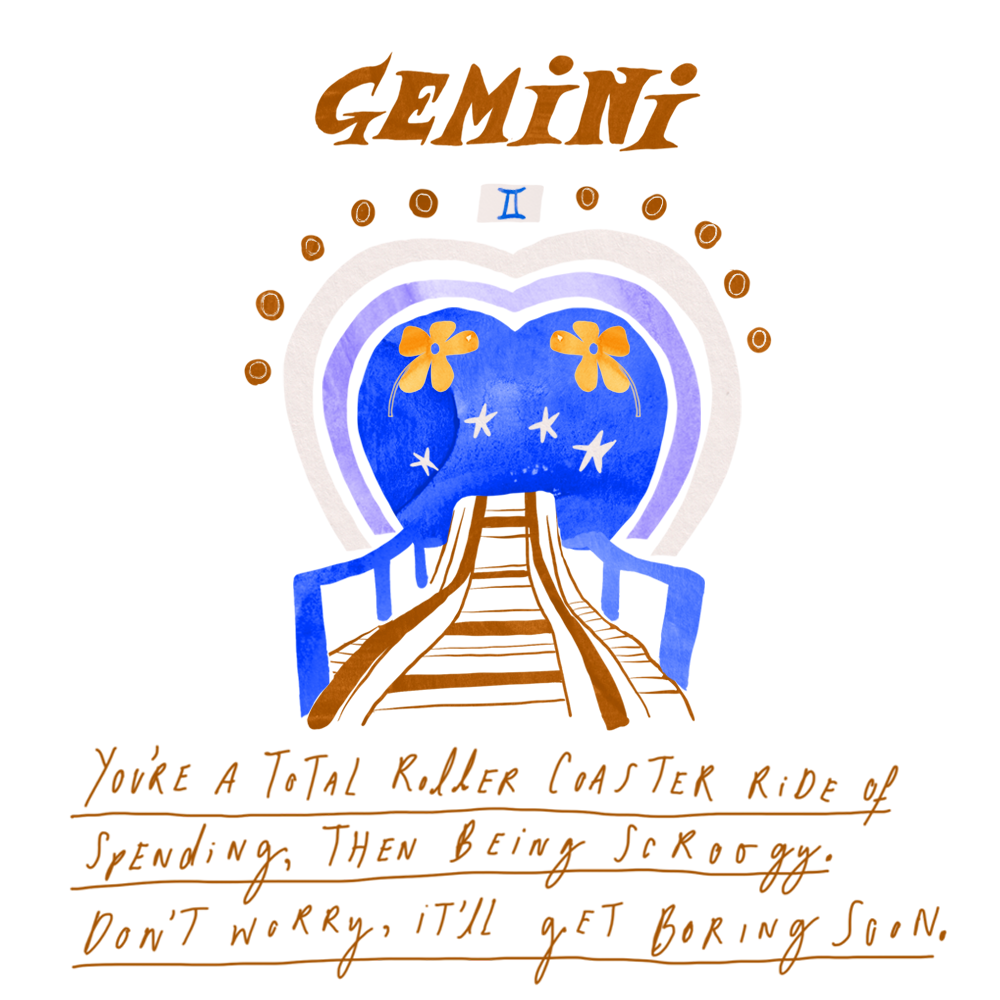 The twins have a dualistic nature when it comes to money, which can create financial ups, downs, and twists—much like a roller coaster. One day, Gemini’s spend money frivolously—the next, Gemini’s are coupon clipping. Proper financial planning may prove to be a challenge for Geminis, as their airy indecisiveness can cause hesitations, leading to stalled investments.

Over time, the ups and downs of the carnival ride will force the twins to make better decisions, as they’ve learned the downside of not having a lush bank account. 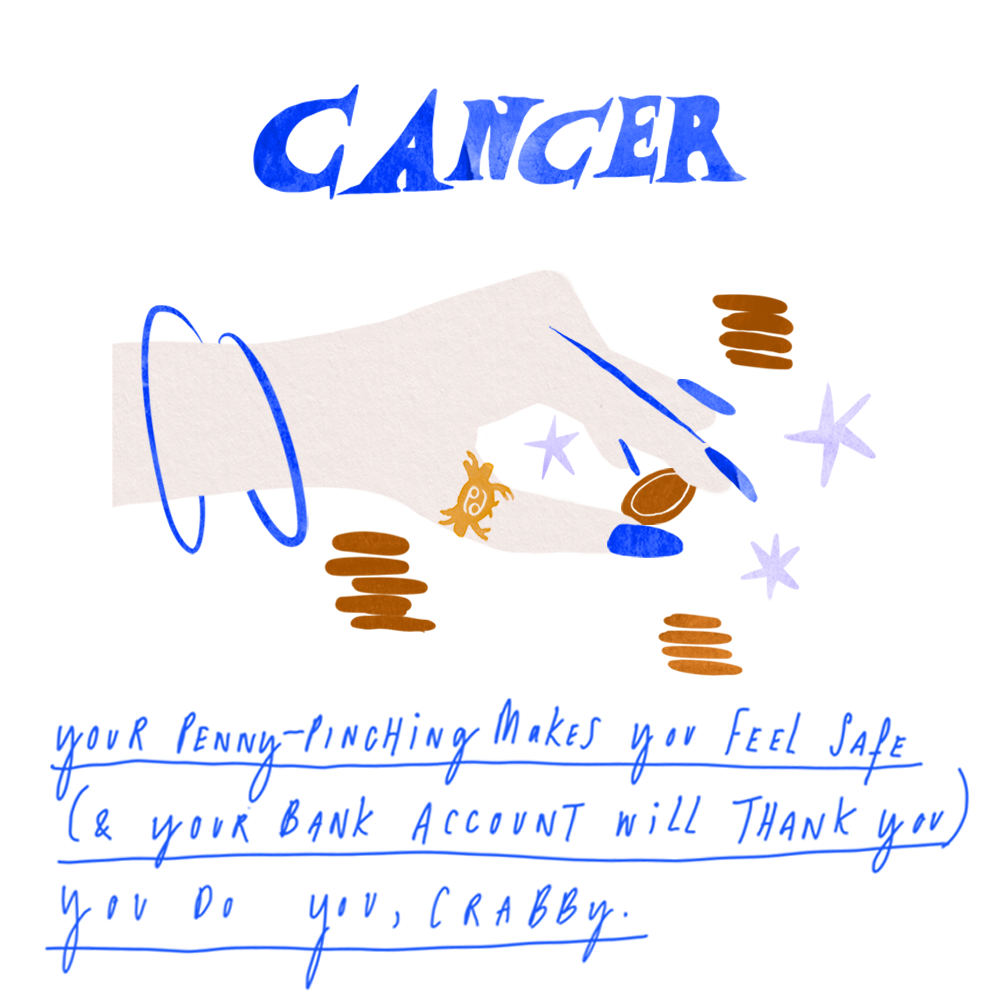 A lover of caution, the crab needs to feel safe in all areas of life—and their relationship with money is no different. While some Cancers may yield a high income, allowing the crab to live the high life, most are known to live below their means, often by holding money or penny pinching.

Don’t feel bad for them though, as this allows Cancers to accumulate lifelong wealth. Saving their pennies for a rainy day can be regarded as frugalness, however, it’s important for Cancers to have a nest-egg and feel financially stable, which is why they invest their monthly savings, to plan for the future. 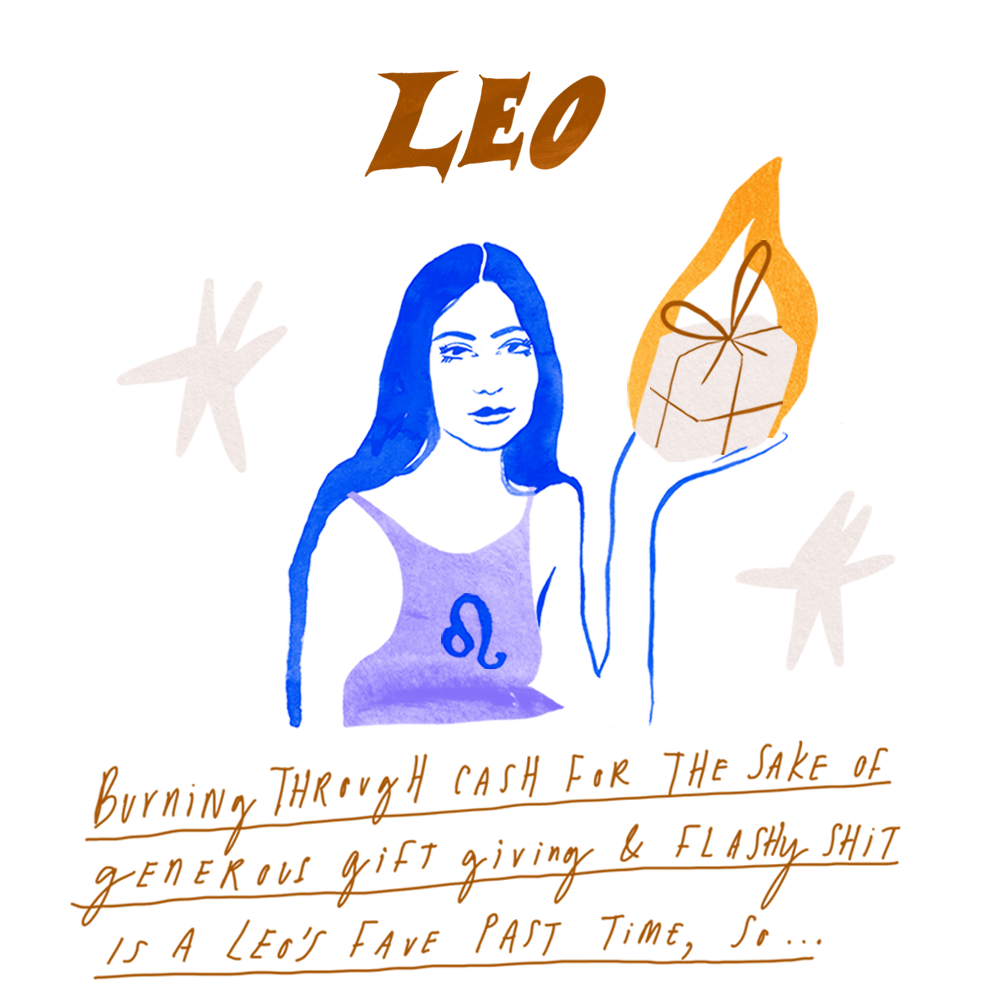 Leo’s love spending their hard earned cash. But, the friendly lion enjoys spending on others, more than themselves. They’re known to buy expensive gifts for birthdays, which may force them to go broke faster than the other zodiac signs.

The lion also demands notoriety and high social standing, causing them to put their financial concentrations on their passions, to escalate their status. Meaning they’re most likely to use their savings for a swank office or a private club membership (where the hipsters hang) to help put them on the map. 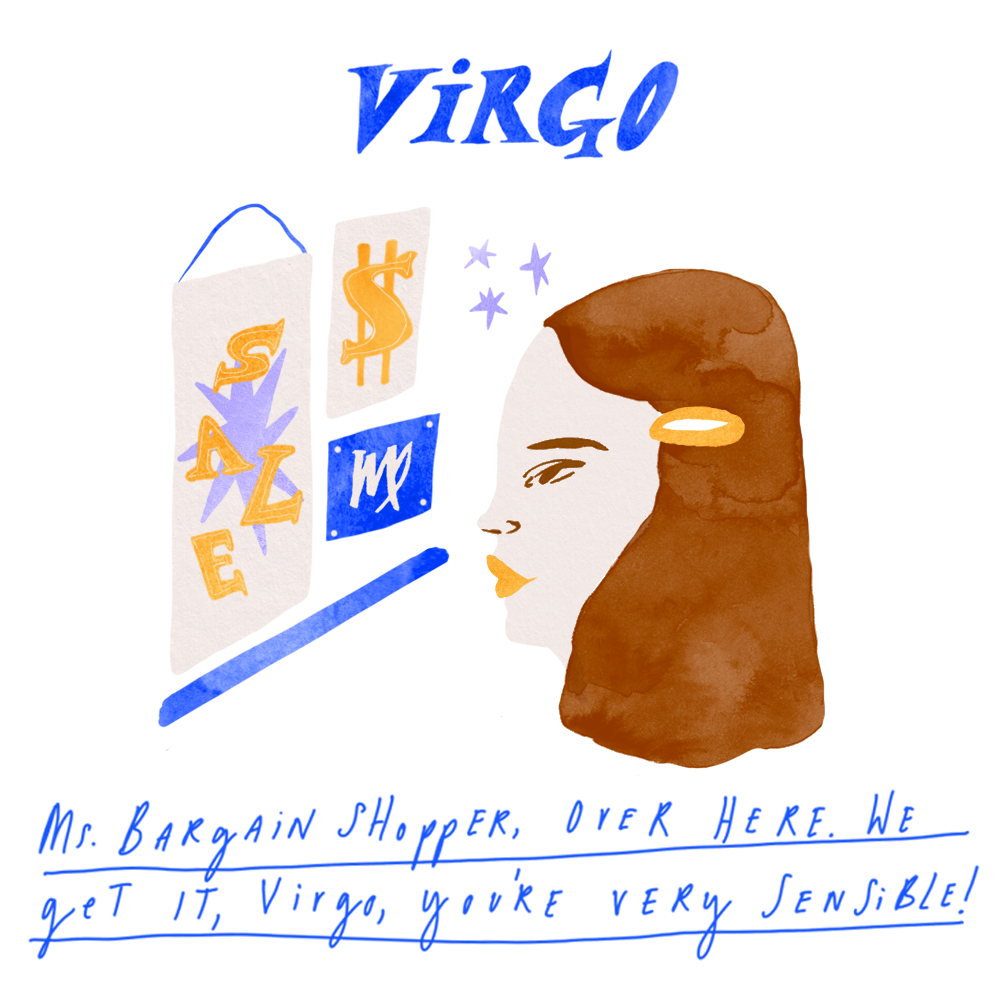 Practical by nature, Virgos are cautious when spending their money. Virgos often use their analytical nature to scrutinize financial ventures before investing their cash, preferring to play it safe, rather than taking high stake risks.

The earthy sign may fantasize over high-priced luxuries, however, they choose to bargain shop as they hate to see their hard earned dollars being spent frivolously. 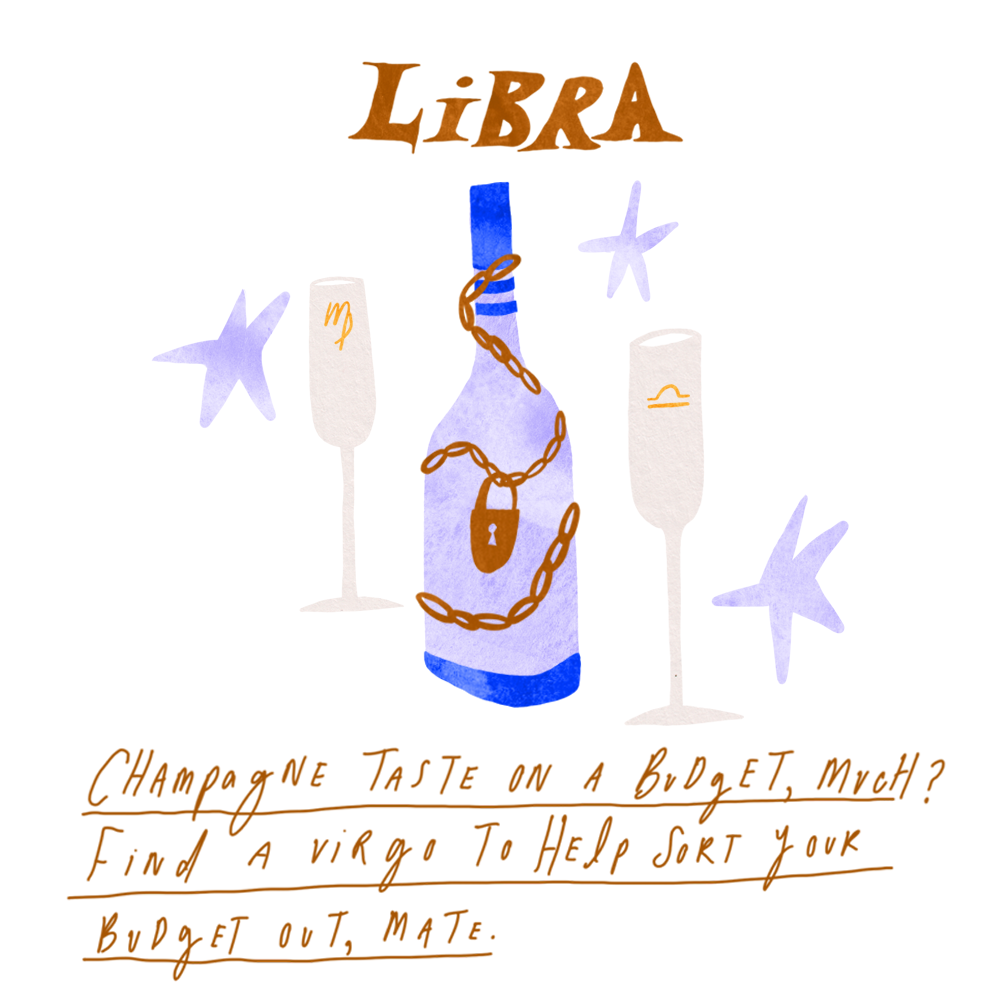 “Champagne wishes and caviar dreams,” permeate the air whenever Libras whip out their credit card. Known to live the bon vivant lifestyle, Libras use their money to book fancy vacations and buy luxury items, thus, restricting them from saving their money.

Bringing in a financial advisor is a helpful tool for Libras to balance out their spending and help them stay on budget when shopping. While it may be hard for Libras to commit to their new financial plan at first, they will certainly feel more centered having a plush savings account. 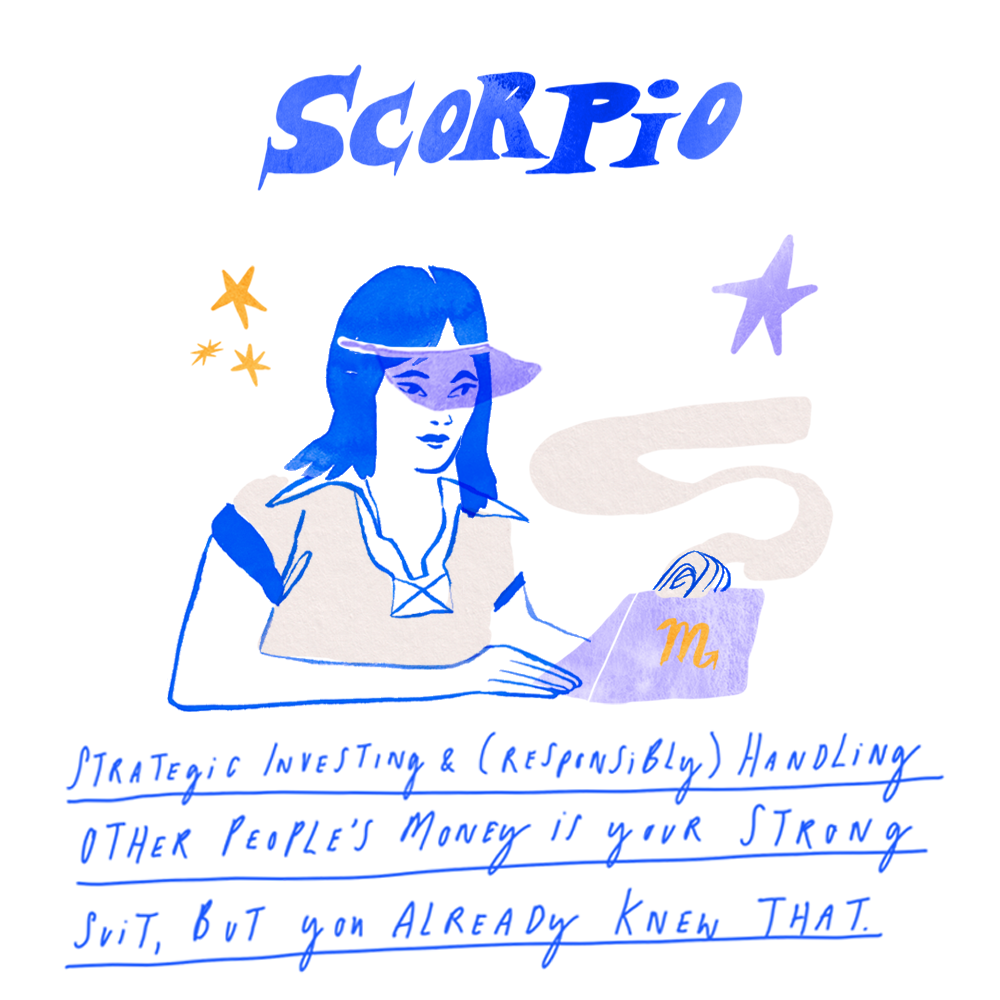 Scorpio is the sign of “sex, death, and taxes,” which makes them the most efficient at handling their own money, as well as others. Playing the long game allows Scorpios to win big at the stock market, as their strategic investing can yield big profits down the road.

Their desire for financial security leads Scorpios to be disciplined spenders. However, the urge to financially purge comes after learning big financial lessons. On occasion, Scorpios may misuse their dollars, but, mostly they keep their money safely tucked away. 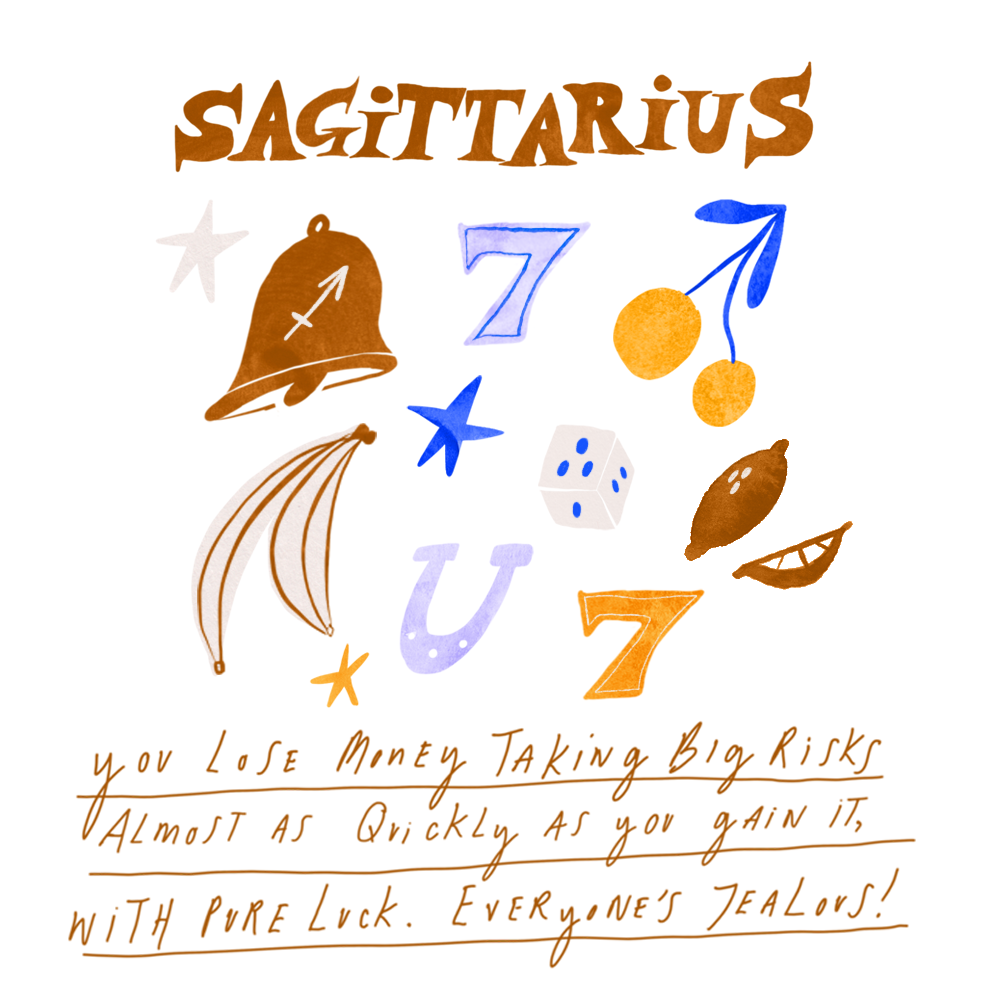 Adventurous by nature, the archer tends to have a curious relationship with money. Born a gambler, Sag’s like to take big risks when investing their money, often betting against the house. With their daring financial investments at stake, more often than not, Sag’s hedge their bets to expand their portfolios.

Winning or losing doesn’t shatter the archer’s confidence, as they use the experience as a financial lesson. After all, money can easily be made—lucrative opportunities present themselves once in a lifetime. 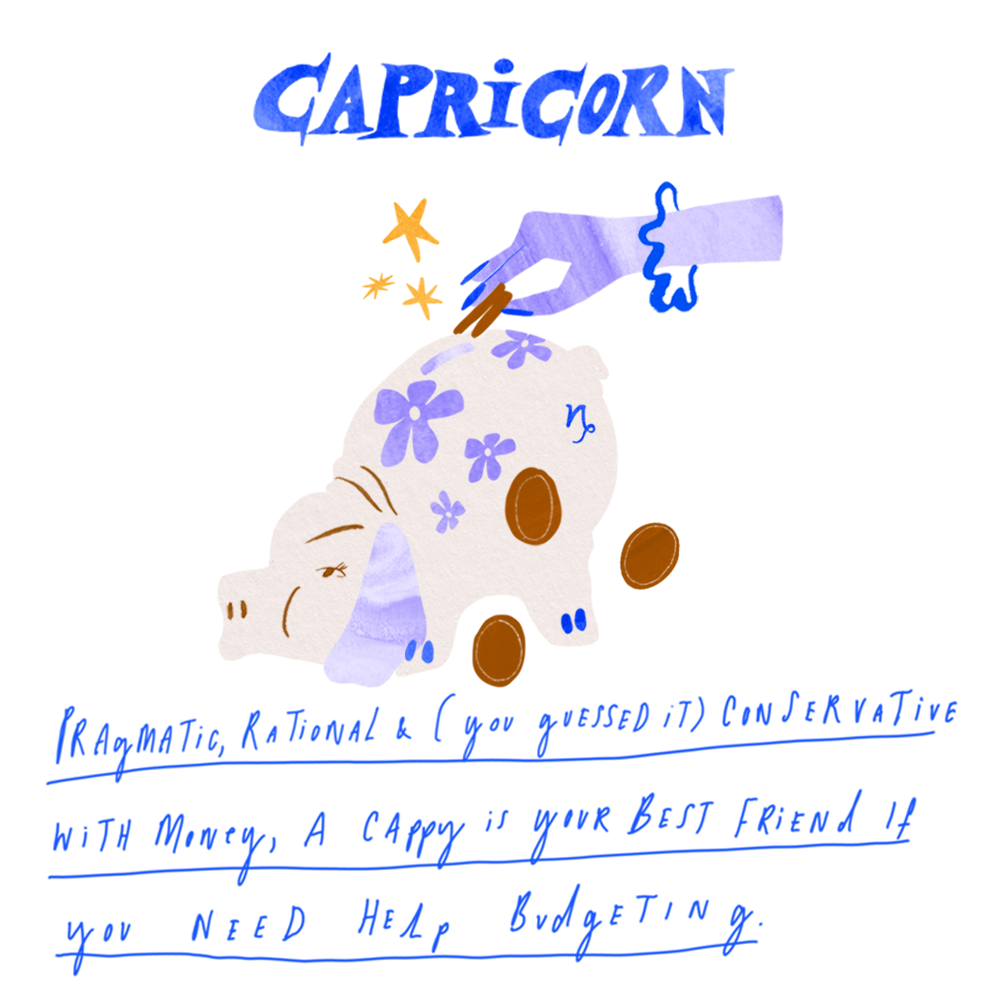 Capricorns are very pragmatic and rational when it comes to their finances. The youthful days of the sea goat may have put a strain on their credit, causing lifelong financial issues. Over time however, Capricorns use their past mistakes as a cautionary tale to be fiscally responsible and mature in the present and the future. 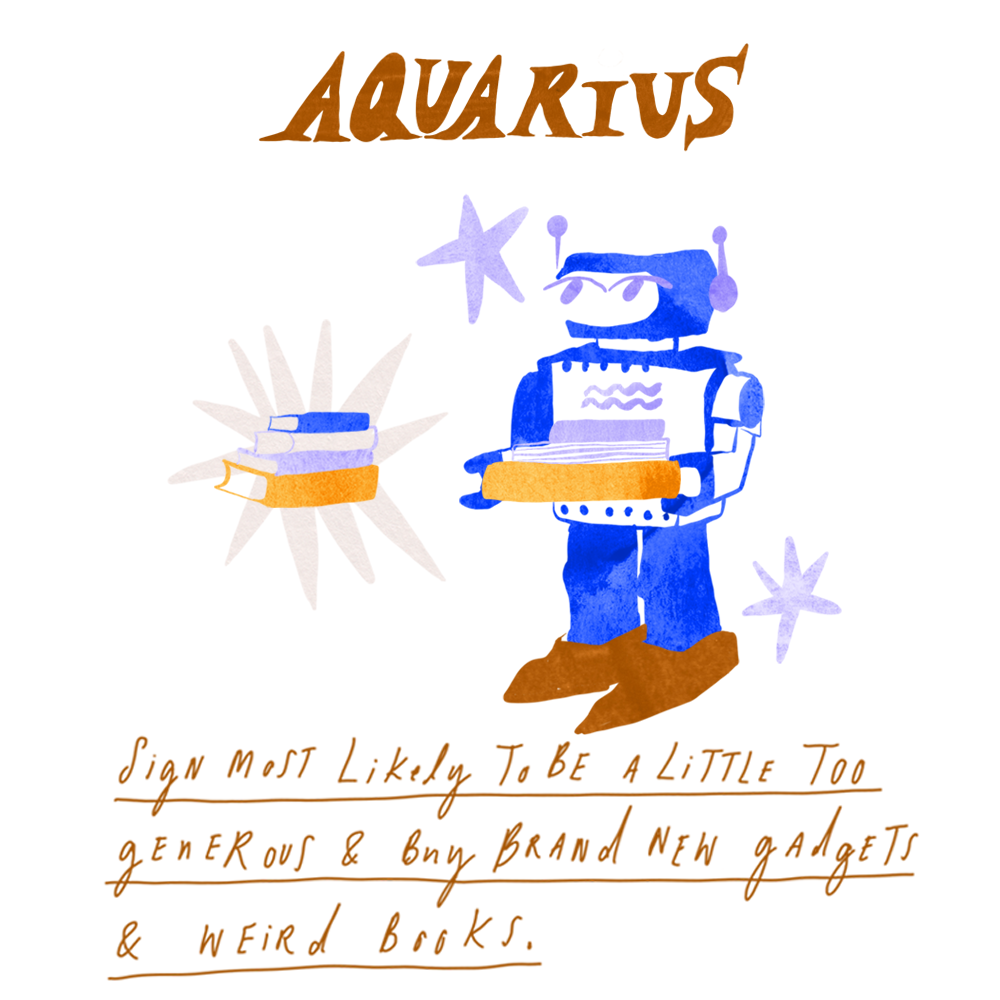 The cup bearer is known to have a charitable heart, which can lead them towards financial downfall, as they tend to be extra giving to others in need, sacrificing their own needs for the greater good. When Aquariuses do spend money on themselves, they often purchase innovative gadgets which serve as tools to better their careers and expand their horizons. 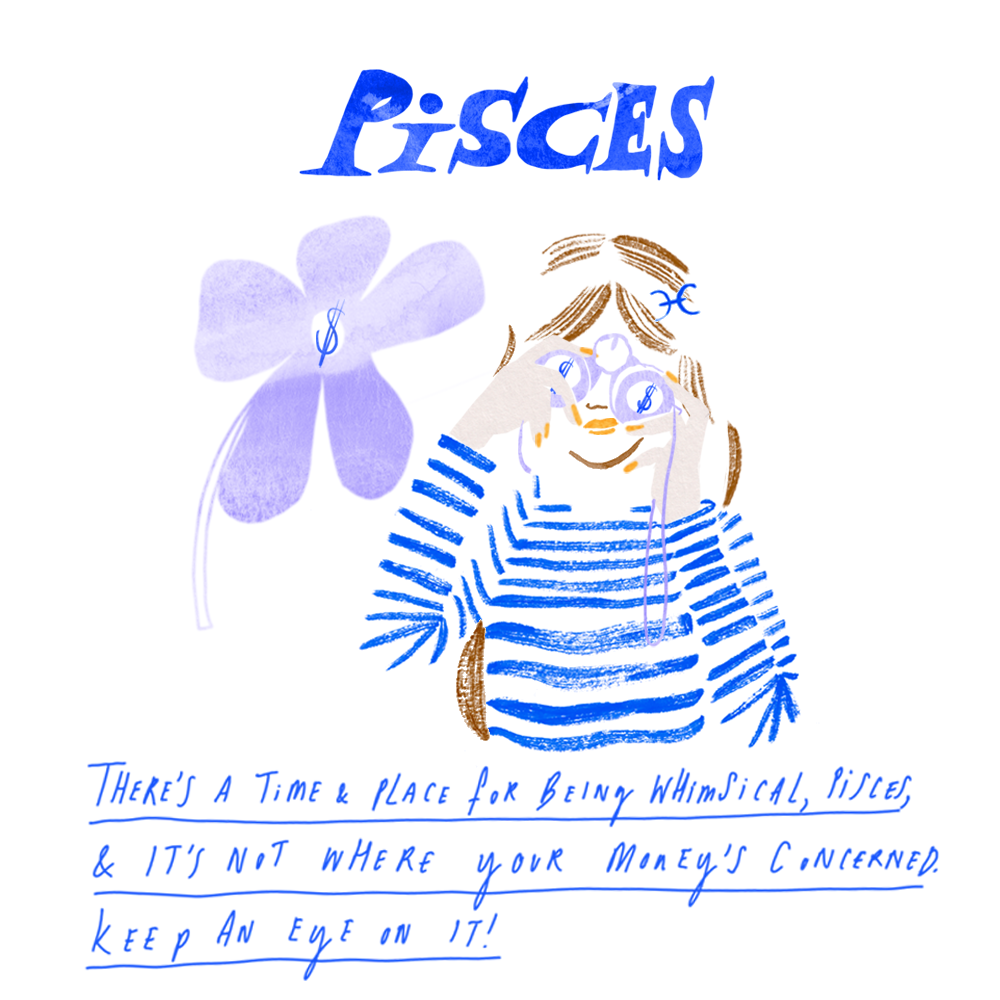 Dreamy Pisces often have a hard time dealing with the material world, which can cause financial problems.
Pisces certainly have a whimsical relationship with money, leading to highs and lows. Often living with their heads in the clouds, rather than focusing on their bank accounts, produces monetary setbacks for the fanciful sea dweller.

A trustful financial advisor can keep a watchful eye on Pisces budget and provide sound advice on investments—even acting as a fiscal protector, to ensure others aren’t taking advantage of the starry-eyed fish. 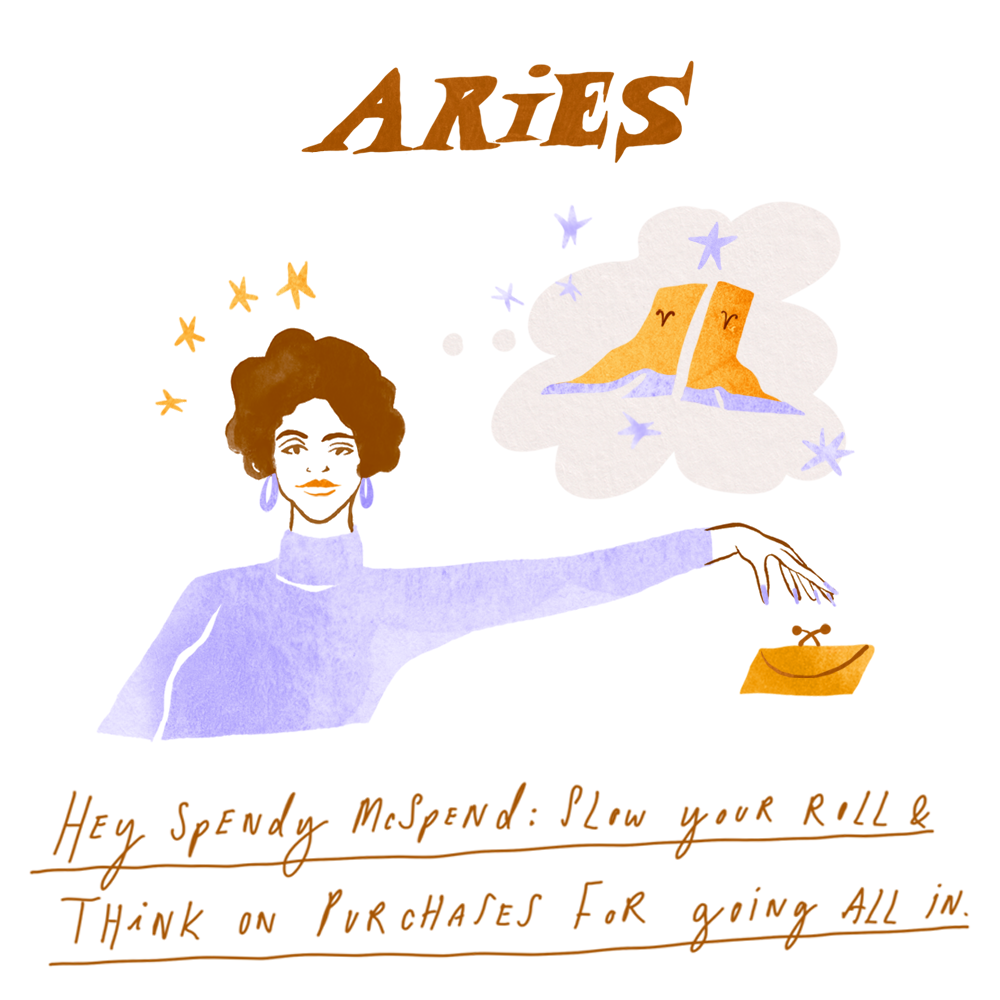 The ram has a tempestuous and ravenous love affair with money. Known for their fiery and hasty energy, Aries often spend their cash, just as fast as they have earned it. Their impulsive spending can lead them to a frequent monetary slump, resulting in them rethinking their high end purchases, making them the Queens of Returns.

These recurrent financial whirlwinds may prove tiring over time, giving Aries the foresight to think before making big purchases. Sleeping on the purchase will allow the ram to carefully decide if the item or investment is the right move, before they run full steam ahead.