Home / Read / I Used Only Gmail Quick-Responses For... I have a confession: I still don’t know how to use Siri. I am what you would call “tech illiterate.” I’m always three iPhones behind and I’ve never met a TV remote I could figure out. I’m like a senile 90-year-old grandma trapped in a smokin’ hot 35-year-old body. Not only am I intimidated by technology, I’m suspicious of it. I refuse to get an Amazon Alexa because I’m convinced it’s gonna steal my information, sell it to the government, and kill me in my sleep. So it’s not totally surprising that my first reaction to Gmail’s “Smart Reply” feature was: Screw that noise!

For people who don’t use Gmail (whut?), Smart Reply is the function where three automated responses appear at the bottom of an incoming email. The idea is that instead of having to craft a response from scratch you save time by clicking on a Google-generated phrase and then send your email. Boom. Easy. In case you haven’t seen it, below is a picture of what Smart Reply looks like from a blog on Google called Save time with Smart Reply in Gmail. 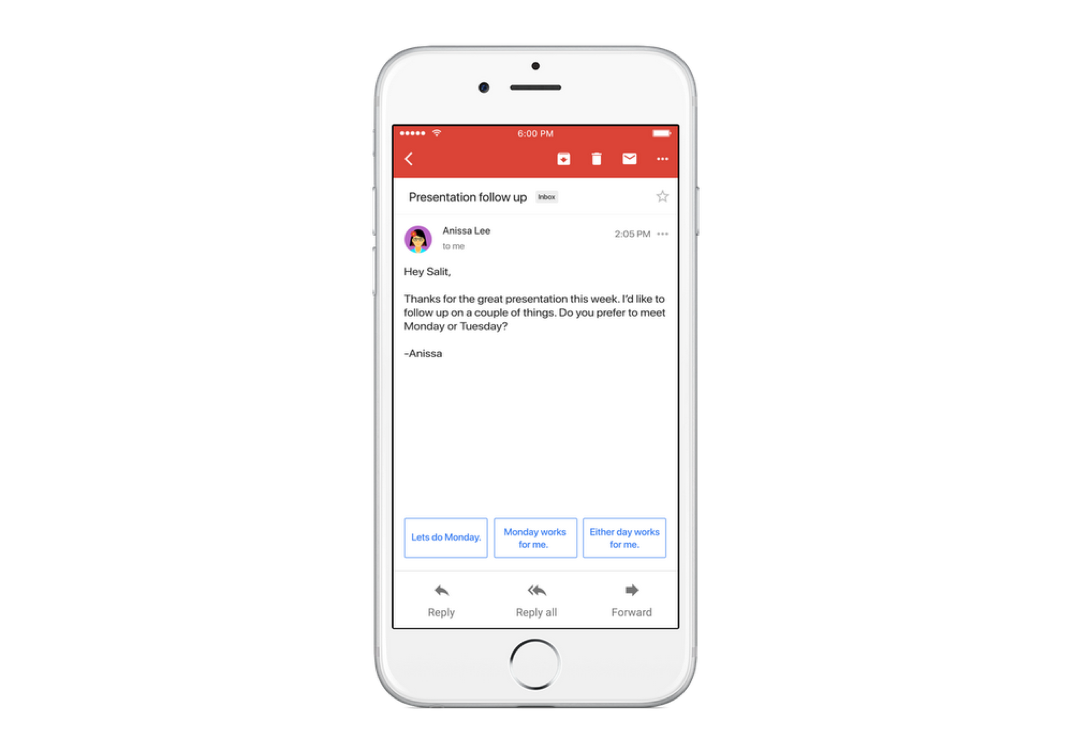 When I first started noticing the Smart Replies on the bottom of my emails, I was frustrated. Technology is turning us into babies! We can’t even be bothered to type up our own emails anymore? Soon we’re gonna need Google Maps to find our ass from our elbow! Not only is the feature infantilizing us, it’s also offensive as a writer. How could Google possibly imitate my singular writing style! Surely my friends and colleagues would know the difference between a Rose Surnow email reply and a Google Smart Reply response. Right?

“Maybe this app will solve all my problems! Clear my skin! Find me a husband! Let the automated, soul-sucking emails begin.”

I would find out. When my editor at Girlboss asked if I wanted to write an article about using Smart Reply in every single email for a week, I found the idea daunting, detestable, and wholly unappealing. So, of course, I said yes. “Growth starts outside your comfort zone,” or whatever inspirational phrase your yoga teacher says during savasana. I am opinionated but I am also open-minded and willing to be wrong. Maybe this app will solve all my problems! Clear my skin! Find me a husband! Let the automated, soul-sucking emails begin.

On Day One of the experiment, things went just OK. I used the feature to respond, “Yes, that still works for me!” to an email to my therapist. But the second email was tricky. My career coach Lee (Yes, I have a therapist and a career coach. It takes a village, OK?) offered me two different appointment times. She had an open session Monday or Tuesday. For some reason, Smart Reply only offered responses that had me agree to meet on Monday, which didn’t work for my schedule. 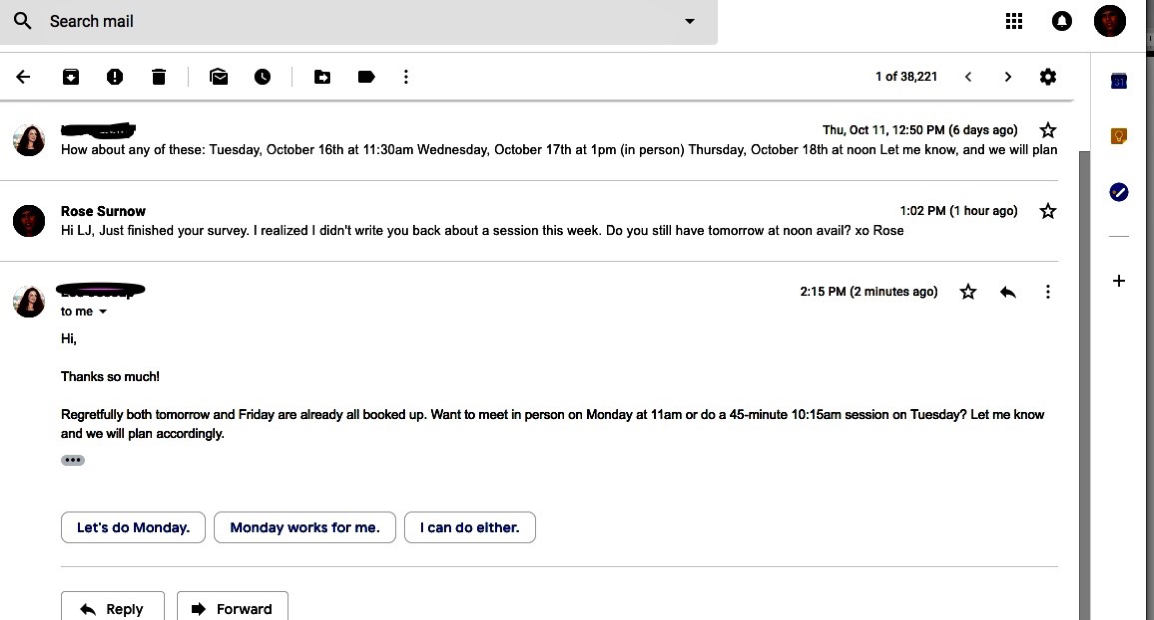 I felt vindicated. Ah ha! Smart Reply isn’t so smart after all, huh? I typed out a message from scratch requesting a Tuesday meeting. One point for human-kind. Lee instantly responded that Tuesday worked and she was looking forward to seeing me. Without even thinking, I Smart Replied back, “Me too!”

Uh-oh. One point for the computer. By the end of Day One, we were tied.

“Sure no problem!” in response to scheduling a work call.

“Will do, thanks,” to mailing some forms to my accountant.

“Sounds great, thanks for the update!” to a headhunter about a freelance assignment.

“Sure that works for me” in response to my therapist moving our Skype call fifteen minutes later.

After using Smart Reply for an entire day, I almost felt naughty—like I was pulling one over on people. No one suspected anything, everyone just bought the robot voice, which was kind of disappointing. Maybe I’m not a special snowflake after all. Considering that 12% of all replies on mobile phones are now Smart Reply, maybe people are just used to this short, impersonal, watered-down version of communication.

The way Smart Reply works is something called machine learning, which means that human beings aren’t reading our emails to pick up on our writing style. Machines are literally scanning our emails to come up with these phrases. According to an article written by Gmail software engineer, Greg Bullock, “Smart Reply utilizes machine learning to give you better responses the more you use it. So if you’re more of a “thanks!” than a “thanks.” person, we’ll suggest the response that’s, well, more you.

I wouldn’t exactly say that the automated phrases were nailing my particular voice, it was a more like a bland version of me. I have a very sassy, ridiculous, way of writing emails, I usually add some silly emojis and over-the-top phrases, like “Fabulous! Werq it, girl” and other co-opted phrases from black and queer communities. Smart Reply never really captured that side of me.

But by the end of a week, I became fluent in Smart Reply. I used it seamlessly, without a second thought. It was easy and convenient just like Google said it would be. But I had mixed emotions. I was curious what my peers thought about the technology so I conducted a rigorous study (asked peeps for opinions on Facebook) and got 27 dramatically different responses.

“I have used it and definitely feel like a robot asshole every time.”

My friend Jared Nunn, a video editor at Buzzfeed seemed ambivalent. “Can’t say I have strong feelings about it—but I have used it and definitely feel like a robot asshole every time.”

My friend Sabba Rahbar, a digital media manager loves it. “I have to do lots of quick copy approvals for work, and it’s super useful when I’m driving (and shouldn’t be emailing, but what can you do?), or I’m away from my computer at lunch or something, and need to quickly approve copy.”

My writer friends were the most suspicious. Journalist Elizabeth Keifer confessed, “I am not using it … I think it has long term slippery slope implications for authorship and that even though it’s “easier” I’m not sure it’s a positive thing to have these increasingly generic kinds of exchanges.”

Another writer friend of mine, James Best, did not mince words. “I want to murder it. I keep thinking to myself, “You don’t know me, Google! Stop trying to shove me in a cliche box!”

As it’s designed now, Smart Reply doesn’t craft long, thoughtful emails. It’s for firing off short “yes/no/I’ll be there!” quips. But who knows where the technology could take us. Whatever my own personal feelings about Smart Reply may be, it’s not going away anytime soon, and neither is automation.

I’m torn because the feature is useful. It does, indeed, save time. So, what should I do? Stick to my guns and be “old-school?” Or adapt, modernize and automate? It’s normal and natural to be suspicious of technology when it first comes out because humans hate change. Ten years ago we all thought online dating was for adult virgins and creeps. And now it’s mainstream. Maybe in ten years from now Smart Reply will compose our parent’s eulogies?

Weighing the pros and cons, I’ve decided to stay old-school. There is a way to disable Smart Reply on your emails and I’m gonna do it. Crafting every email from scratch is a little more work but I like the personal touch. Just because Smart Reply is faster doesn’t make it better. My goal in life isn’t to move as fast as possible. It’s to be asme as possible.

So, in a response to Google that sounds like a Smart Reply “Later, dude!”