The best boomerang I know of is not the esoteric toy of simpler, tech-free times nor the high-tech, dizzying mini-videos all over your Instagram feed, but a just-as-aptly named email plug-in: Boomerang for Gmail.

In the 18 months or so I’ve been using it, this nifty tool has made me better at both my job and simply being a person in the world (or, as some might say, “adulting”). Essentially, Boomerang makes magic happen.

Like everyone else in 2018, it’s easy for my workday to be swallowed whole simply by trying to keep on top of my inbox. I’m guilty of checking my email before I’m even fully awake and getting sucked into a vortex of replies. Call me a control freak, but I also have a bit of an obsession with keeping things at “inbox zero.” Boomerang is the best hack I’ve found for actually making that happen.

There are a couple key features to know about this handy tool: 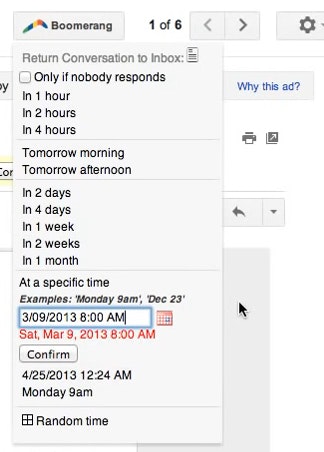 Here’s what got me hooked. Ever open an email and know that you absolutely can’t forget it and need to respond, but have 47 other pressing tasks that come first? Simply “Boomerang” it to resurface at the top of your inbox at the exact time of your choosing, be it two hours, two weeks, or two months later.

For me, this often manifests as Boomerang-ing a message that I’ve received back to myself when I have the time or desire to actually deal with it. For instance, if you want to deal with all your personal emails in the morning, you can set the personal emails that trickle in throughout the day to all re-arrive at 7 a.m. the next. Or, say you book a flight a couple months in advance: Boomerang-ing the receipt back to the top of your inbox the night before takeoff will give you the info when you need it.

When you go to send a message, the Boomerang plug-in adds a “Send Later” button that lets you choose the exact time, to the minute, that your email goes out into the world. For example: ever find yourself catching up on work over the weekend but don’t want to annoy your coworkers with a barrage of messages? That’s the perfect instance in which to schedule your emails to send first thing Monday morning, when you’re also less likely to get lost in their inboxes.

Of course, you can also use Boomerang a little bit like Siri—sending future you a note about something you can’t forget. I can’t claim to use this feature for anything much more important than 12 a.m. me sending 8 a.m. me a reminder to take my gym clothes—but still, super useful!

I Boomerang my sent emails like it’s my job because, as a freelance writer, keeping on top of things is key, so it kinda is. I also Boomerang them because I know everyone else’s inbox is as overwhelming as my own. For instance, say I send an editor pitches, but know my message might get buried. I simply Boomerang my own sent email back to myself at a time I think is best to follow up. (This also works wonders when you receive someone’s out of office message, but don’t want to forget the thread.) Here’s the key: make sure to check the “Only if nobody responds” box to keep from getting resurfaced threads in your inbox when they’ve already replied.

Do some serious professional stalking

Full disclosure: I do not take advantage of Boomerang’s have-they-opened-your-email capabilities for the sake of my mental health. Beyond the standard read receipts, you can also track whether or not people have opened the links in your email. Creepy? IMO, a little, but I have friends who swear by this function—and determine how to proceed in professional interactions based on the insight provided.

Finally, you can literally put your inbox on pause. This feature comes in handy when you need to kick your focus into high-gear, catch up on the emails you already owe, or simply need a mental break. I’ll be testing this feature when I know I’m down to the wire with a deadline. Pausing my inbox for even two hours might just be the perfect way to bang out some work, uninterrupted. 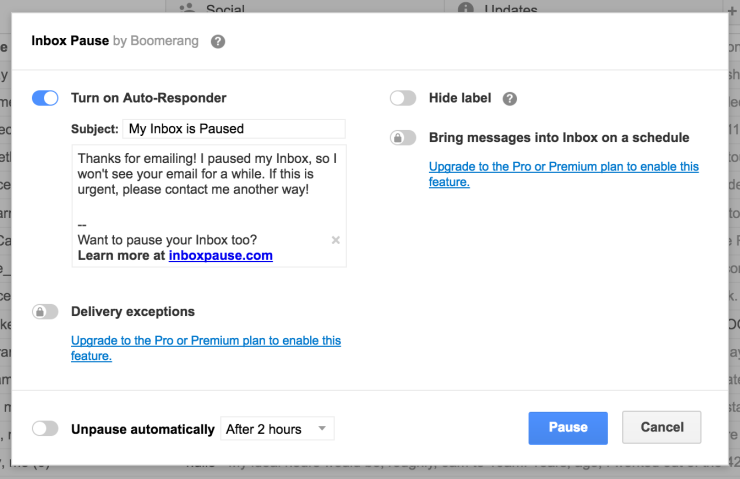 PLUS, just a few months ago, Boomerang launched an app, something I’d been very eagerly awaiting. It’s still a little clunky; the ultimate dream would be a mobile-compatible plug-in so that I don’t need a separate mail app. Still, it’s certainly come in handy multiple times when I’m not home, remember an email I didn’t answer and know I will re-forget promptly—and quickly Boomerang it to myself on-the-go.

You can download the free version of Boomerang for Gmail now, which gets you 10 “credits” aka 10 uses per month. Within a few months of realizing how well this plug-in served me, my work, and my sanity, I looked into upgrading. Initially, I was skeptical, because adding any recurring expense stresses me out, even if it’s only $4.99/month, the cost of an unlimited “personal plan.” But I went for it and can confidently deem the app one of the top five most useful business investments I make all year. Go forth and Boomerang.