The daughter of marines, Ennis knew with absolute certainty, that she’d follow in their footsteps. “My barbies all had dress blues instead of princess gowns,” she recalls laughing, “and my favorite shirt said, ‘My Mom is a US Marine.’ I just wanted to give [my parents] a reason to be proud of me like I was proud of them.”

And so after convincing her parents to sign the paperwork that would allow her to enlist early at age 17, Ennis did just that. But after six years of service, during her final deployment in Afghanistan, disaster struck: The helicopter in which Ennis was performing a resupply mission went down.

“When I woke up, the only thing I could feel was all the grit from my crumbled teeth and my missing jaw. I couldn’t breathe through my nose,” she says. Ennis sustained full thickness facial trauma, traumatic brain injury, cervical and lumbar spine trauma, and bilateral shoulder damage.

And the devastating blows kept coming. Ennis’ doctors strongly recommended she undergo leg amputation surgery, which she refused at the time. “I said absolutely not. I didn’t know any amputees at the time, I damn sure didn’t know any female amputees,” she says.

In addition to the pain of being forced to retire from the job she’d dreamt of since she was a kid, Ennis simply couldn’t picture a life without her leg back then. “That’s such a huge loss. And of course there’s a lot of self-esteem issues that were going to go on behind that.”

For the next year and half, Ennis explored every option she could to save her leg, undergoing surgery after surgery, all of which was followed by essentially needing to learn to walk again. And when she finally consented to the amputation, there were more painful decisions on the horizon still.

Ennis ended up undergoing four separate amputations—the most recent of which was nine months ago — that would take her from losing her leg below the knee to above the knee — a “night and day” difference, as she puts it.

“I was very close to just giving up altogether, because I didn’t think that I was going to be strong enough to deal with the loss of my knee. There’s no more putting one foot in front of the other. You have to relearn everything.” 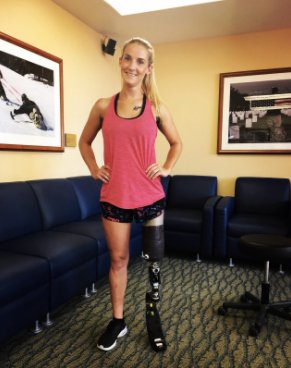 And yet to say Ennis has persevered over this life-changing event is a understatement. Now 26, Ennis recently became the first above-the-knee amputee female veteran to scale Carstensz Pyramid — one of the most difficult summits in the world — as a member of The Heroes Project, a support and training group for injured veterans.

She’s also one of the top Paralympic snowboarders, with her sights set on the games in PyeongChang in 2018. Oh, and she recently graced the cover of ESPN’s issue. Oh, and she’s currently at work on her third master’s degree. And her real estate license.

Which leaves us with the only logical question to ask: How?

“I did two years of speech therapy, cognitive therapy and physical therapy, and had I not been able to focus completely on that, maybe I wouldn’t be able to be here talking to you right now,” Ennis says.

Now living in Fallbrook, CA, with her boyfriend who is a triple amputee, Ennis keeps an intense schedule of climbing and training. And while her accomplishments in the two years since her accident are staggering by any measure, some days are better than others.

“I’d be lying if I said any of this was easy or painless. But it’s kind of the one thing that is keeping me above water. One of the things that I really struggled with and had to learn is that no one owes you anything. You owe it to yourself to keep going forward with your life.”

Ready to channel some of that hard-earned forward motion that’s propelled Ennis to such incredible heights? Check out what a typical day looks like for her below. 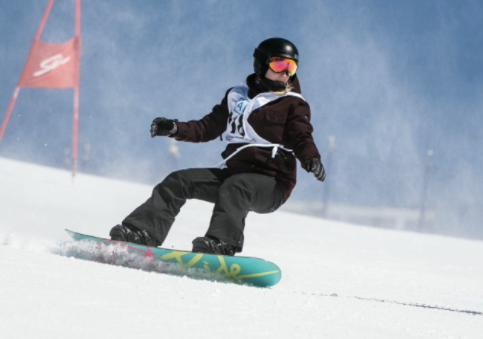 6:30 a.m. Wake up. If I don’t wake up to my alarm, my three miniature horses—aka my two Great Danes and my Rhodesian Ridgeback—will wake me with their howling for food. Coffee is a staple in my mornings; nothing really gets done until then.

7:30 a.m. I head to Equinox. The closest one to me is a 40-minute drive one way, but it’s worth it. Fallbrook to Costa Mesa isn’t a terrible drive, though the traffic makes me bitter (hence the need to consume coffee beforehand.) I quite like the looks I get in the gym and doing things that people with two legs don’t bother with — Olympic-style lifting and high-intensity workouts have become my favorite. I’m too impatient to do meditation or yoga, though it’s been highly recommended to me.

8:45 a.m. Time to drive back to Fallbrook. It’s always gloomy until the clouds burn off, but it makes for a peaceful drive. Once I finally make it home, I have to turn off the chaos of my racing mind and the “to-do” list. I am working on my third master’s degree while studying to take my real estate license exam, so textbooks and course work take up my mornings. I might be a glutton for punishment.

12 p.m. I like to cook quite a bit. The whole process start to finish eases my mind, including doing the dishes (crazy, I know). I’ll make up mad scientist creations for breakfast, lunch, and dinner. My latest and greatest discovery is wild ram, which I had when I was in Alaska recently.

2 p.m. The mountains have taken over my heart and mind. Training has focused me in my recovery, and is constantly creating new goals for me to reach. Southern California is terribly hot this time of year, so I have to wait for the heat to simmer down before I can go climb in Joshua Tree. Some days I hike at Mount Baldy, which is an equidistant drive.

7 p.m. After I get my climbing fix and accompanying adrenaline rush, it’s time to head home and have some dinner. Coming home to my kids (a.k.a. my dogs), is always a whirlwind. It’s nice to get such a warm welcome home from them.

8:30 p.m. I’ll indulge in my guilty pleasure — watching some sitcom on Netflix. My nerves in my leg are typically going crazy by this point as I try and wind down.

11 p.m. Most nights I’m in bed and asleep by this time, after falling asleep on the couch first. I am not used to the quiet, so it takes me time to settle back down.