It’s a truth universally acknowledged that juice cleanses are unhealthy and possibly dangerous. Are soup cleanses any different?

It’s been a few years since I did my first and only juice cleanse—a five-day experience I mostly remember as me staring at my forearm, wondering if it didn’t low-key taste like a baguette. I didn’t come away feeling “detoxed” so much as hangry, and while I felt less bloated at the end of it, this was a state quickly undone by a celebratory beer. Or four.

In the time since, I haven’t been tempted to give it another go, especially considering the fairly wide-reaching consensus from nutrition experts that dramatic and sudden calorie restriction as well as a sharply increased sugar intake can be harmful to your health.

But, when I came across a new drinkable-soup company called Zupa Noma, I was intrigued. First and foremost, I freaking *love* soup. One of my favorite t-shirt reads “We Both Love Soup,” which I adored long before it was pointed out to me that it’s a Best In Show reference. I just really love soup.

“My microbiome is about as verdant as Hulk Hogan’s armpit. I’m perma-bloated, and my digestive system is a crap shoot, both figurative and literal.”

Second: My microbiome is about as verdant as Hulk Hogan’s armpit. I’m perma-bloated, and my digestive system is a crap shoot, both figurative and literal. Considering soup purees are basically just watered down baby food, and babies are basically just sentient poop machines, I was quickly sold on Zupa Noma’s claims of being “the perfect way to give your digestive system a break.”

Third: The following week, I was headed to Hawaii for vacation, and the notion of clearing my pipes beforehand so I could eat as many Spam musubis as I wanted was highly appealing.

And finally, a soup cleanse is different than a juice cleanse, in theory; vegetables are used “skin-to-seed,” so the soups contain a bunch of fiber and significantly less sugar, which one would assume absolves them of the primary drawbacks of juice cleanses.

The plan was as follows: Six soups a day for three days, plus three “mini meals” (these include things like chickpea salad and quinoa porridge, and recipes are provided with the soups). Each soup is alleged to contain at least four servings of vegetables, meaning I was about to embark on a mission of eating at least 72 servings of vegetables in as many hours and put my Taco Bell-loving tastebuds on notice. 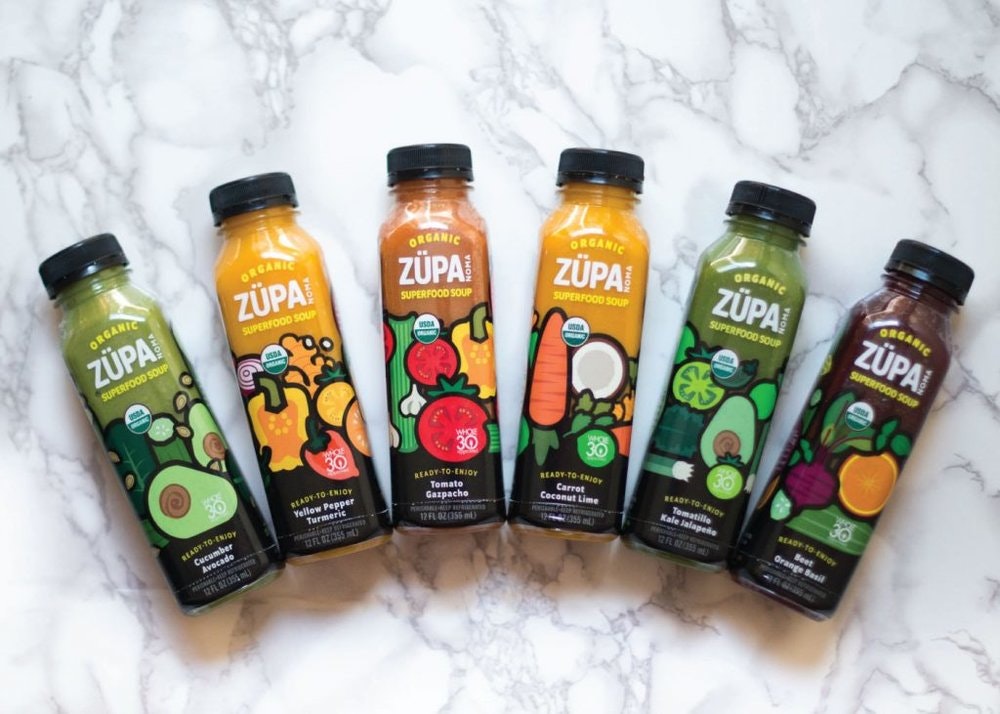 Alas, here’s the reality of my brief flirtation with being a hardcore “clean” eater: Drinking six soups a day is so much harder than it sounds. You’re supposed to drink one every two hours, plus eat your mini meals, which essentially meant I was never not eating or drinking something.

Suffice it to say, I did not marry this soup cleanse. While tasty enough, the soups were incredibly thick, making them somewhat laborious to drink, especially for someone with the gag reflex of a carsick one-year-old. I didn’t get to soup number six on any of the three days, because it was just too much soup.

And while I managed to eat two mini-meal breakfasts on two of the mornings and I had lunch on one of the days, I didn’t feel compelled (nor did I have the time) to eat the other mini meals. On the up side, though, I was never hungry, nor did I get lightheaded. But on the flip side, I wasn’t getting enough protein if I wasn’t squeezing in all the mini-meals.

Was my failure to consume all the recommended soup my body’s way of telling me that yes, there is such thing as eating too many vegetables? Was this my scrappy, roll-with-the-punches organs telling me to cut it out with this forced program of virtue and cleanliness, and just let them do their thing?

“Was my failure to consume all the recommended soup my body’s way of telling me that yes, there is such thing as eating too many vegetables?”

Liz Applegate, Director of Sports Nutrition at UC Davis, confirmed my post-cleanse suspicions: “There’s always such thing as too many or too much of a good thing. And, look: We’re designed to digest and assimilate food. That’s why we have a very involved digestive tract system. And in fact, we’re designed to break down fairly rustic food—not purees.

“Think about what cave people had. They certainly did not have blenders. We can handle it. And there’s no evidence that we need a break, with the exception of somebody with a digestive disorder or a bowel disease.”

Alexandra Reed, registered dietitian and Girlboss nutrition columnist, concurred, adding that it’s actually important to allow your body to go through the entire process of breaking down whole foods: “This is a good thing, because it slows the absorption of carbohydrates in your body and allows your enzymes and good bacteria to extract as many nutrients as possible from the foods.”

But still, even if we don’t need it, aren’t there some benefits to eating a boat load of vegetables all at once?

Not so much, as it turns out. While Applegate acknowledges that it’s more or less fine to do a three-day vegetable fest so long as you’re incorporating high-quality proteins, as suggested in the mini meals, her primary concerns are more in the psychological and habitual realm.

She says, “It’s almost like three days of punishment. I notice this with people who do the juice fasts or do other kinds of cleansing; it’s like, ‘OK, let me beat myself up for that binge weekend I had, whether it was sweets or alcohol or fast food.

“This particular plan is very excessive with vegetables, and I would hope that wouldn’t turn a person off to eating vegetables routinely. Having three to five servings in a day is the goal. When you get to this level, it’s just that you’re really doing something that isn’t a natural diet,” she says.

But, there is some potential silver lining, according to Applegate: “You’re following a plan, and that [could be] what gives people the discipline to hopefully break their lousy eating habits [long term].”

In other words, it’s doing a cleanse as a “detox” after a bender that wreaks the most damage (or vice versa, in the case of my designs on having a post-cleanse Spam-fest on vacation).

“…doing a cleanse as a “detox” after a bender that wreaks the most damage.”

“Those extremes are not optimal for your body,” Applegate says. “That concerns me, because you’re shifting nutrient intake and calorie intake dramatically. You’re at a bachelorette party and high alcohol intake over a period of a couple of days is challenging for your body. But then you go to this very low protein diet with tons of veggies. Your body can handle some extremes, especially while you’re young, but it’s not optimal.”

As for my constant state of bloatedness? Reed points out that your gut bacteria can change within hours. “Surprisingly, your gut is fairly responsive. But maintaining an ideal ratio of anti-inflammatory bacteria requires consistently feeding your bacteria a whole—a.k.a. non soup-only—nutritious diet.”

All of which is to say that despite the three remaining soups that are still hanging out on the shelf of my fridge, I won’t be guilting myself into another cleanse in the future. (And I’m working on eradicating the idea of guilt from my food vocab altogether.) But for a quick hit of vegetables on the go, Zupa Noma’s soups are handy and tasty—I could see certainly myself cracking one open to liaise with the Cheesy Gordita Crunch I’m having for lunch.

I know, I know, but the takeaway here is that dietary change should be gradual, right?