Is your colleague mad at you, or is that just her resting cosmic face? Who knows! One thing we do know is, zodiac signs in the workplace is a thing and mixed with office politics, we’ve got a match made in the heavens.

Workplace personality types are nothing new. Between the “Queen bee in the corner office” kind of coworkers, to “ENFPs,” to “pioneers,” there’s no shortage of categorizations when it comes to office temperaments. But one stands the test of history. You know ’em. You love ’em. They’re zodiac signs.

And they’re fun to analyze, especially in the form of “starter pack” memes. So let’s do that right now.

Woah, Nelly. Aries in the workplace has zest, to say the least. Pioneering, powerful and one of the most outwardly ambitious signs, Aries will head butt their way to the top of most office hierarchies pretty quickly.

But that hot head of theirs won’t always have their back. Arrogance, the need to always be right, and a reputation to not always finish what they started, could be  the downfall of these bossy boots.

Colleague most likely to: Yell at you when they’re stressed. 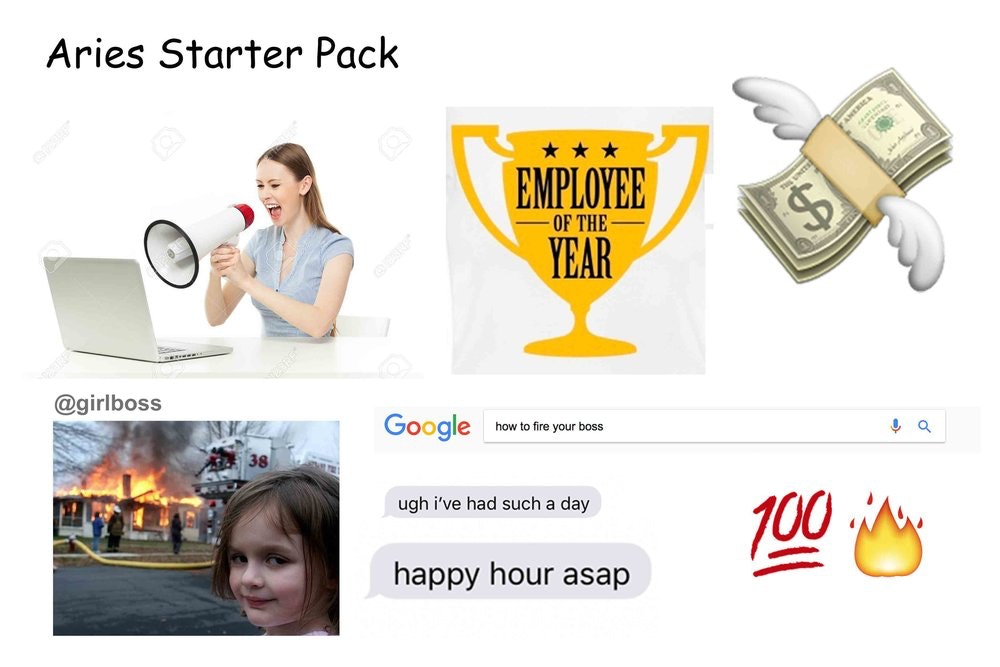 This sign knows perseverance can pay off, work-wise. They might seem slow and require some patience as colleagues, and they’re pretty resistant to change, but they always get the job done, and they’re in it for the long haul.

They also love being surrounded by beautiful things, including yum lunches. So when you need the best snacks, head to their desk for a treat.

Colleague most likely to: Stay back late after work. 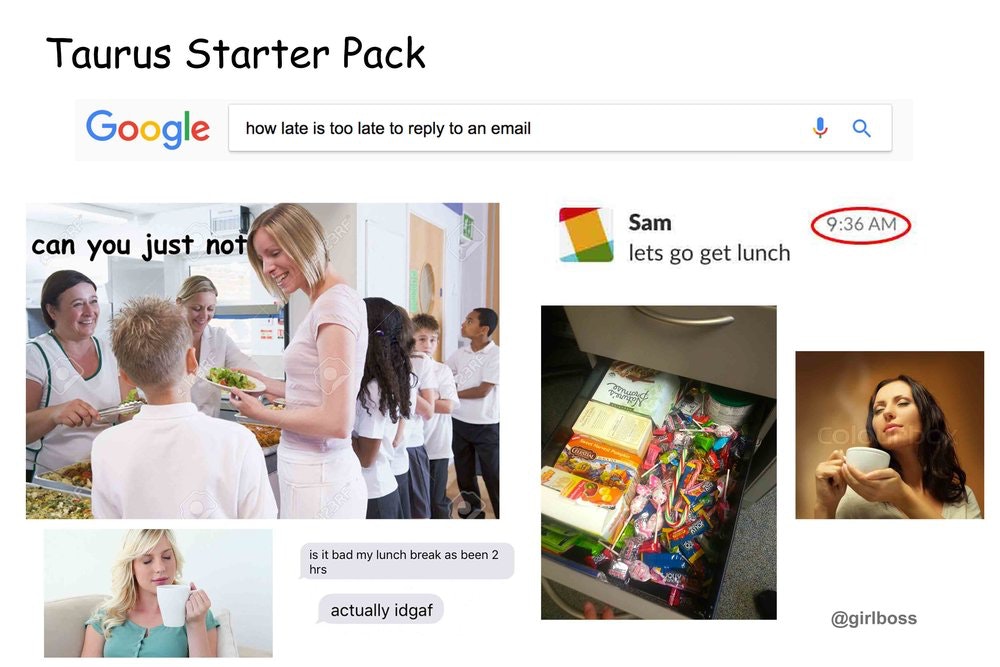 Witty, charming and generally talkative, Geminis are salespeople, even when they’re not salespeople. They’re happiest playing the music they like, cracking jokes and being persuasive in meetings.

On the flip side, people might find them too flighty or scattered, and they’ll have to battle against being easily bored, if they want to stay motivated.

Colleague most likely to: Talk circles around you in meetings.

These gals are all about emotions, so while they’re temperamental as hell when times are chaotic, they’re pretty much always reliably warm, kind and perceptive. They’re team players with a high level of intelligence and a natural desire to take care of others.

But push them, or stress them out, and you’ll see just how crabby they can be. And if their emotional needs aren’t being met at work, they’re outta there.

Colleague most likely to:Get moody at the drop of an email. 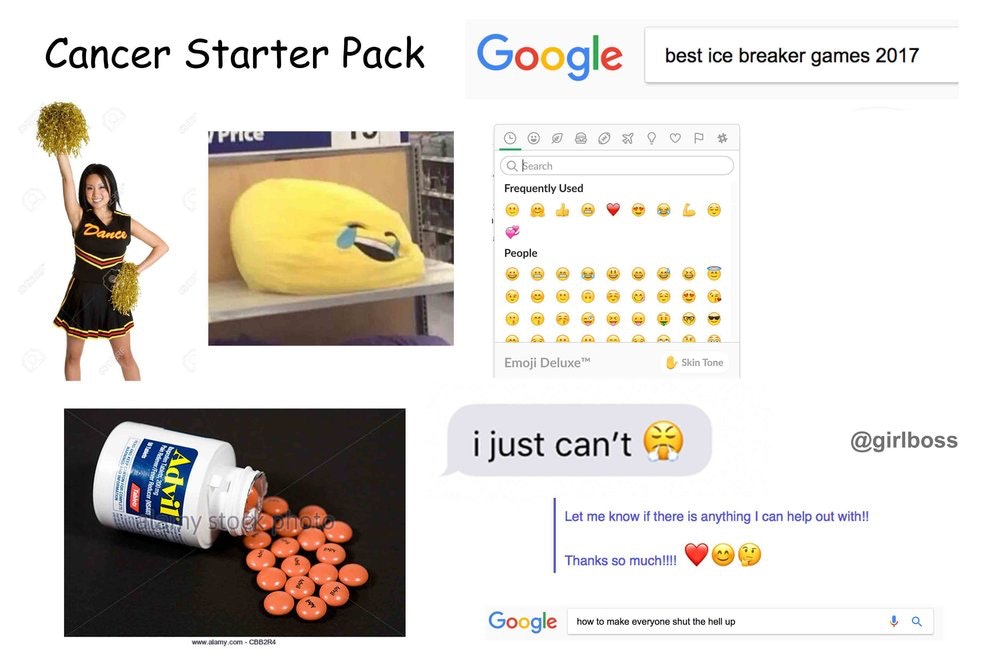 Masters of the art of having both an insecure and ego-driven nature, Leos at work have a strong personality and a need to be right. They hate gossip, command respect and appreciate authenticity. Be genuine around them, and they’ll prove they’re one of the best allies someone can have.

They’ll stick up for you, or anyone else, if need be. And even if it’s not needed, TBH. Contrary wise, they’re melodramatic AF.

Colleague most likely to: Swagger in 15 minutes late with Starbucks. 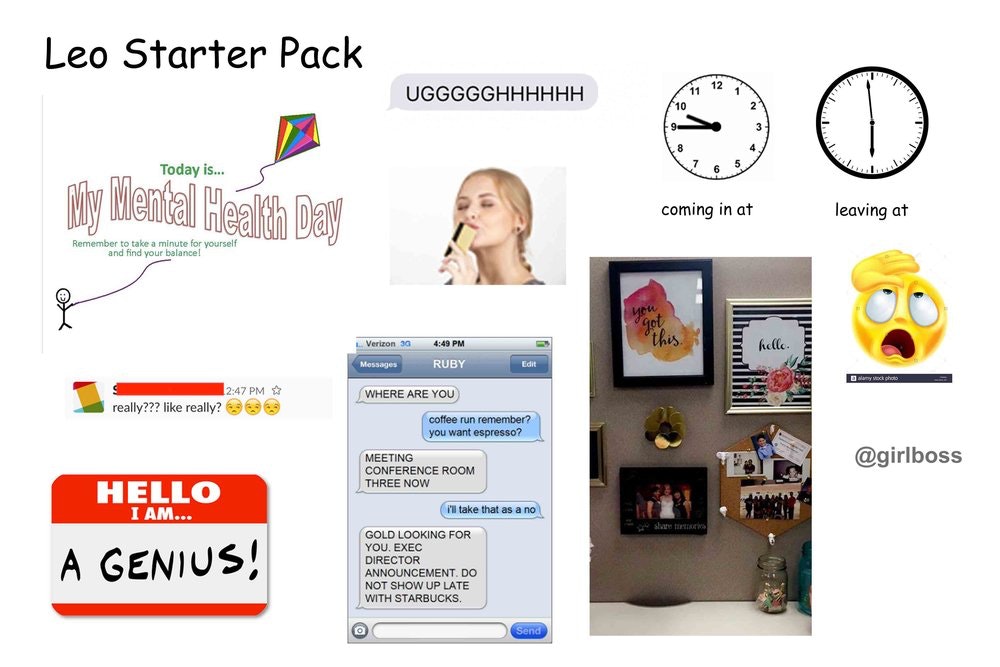 Virgos are known as they caretakers of the zodiac, but that often manifests as suggestions and advice that borders on nagging, and an “I know best” attitude. But Virgo’s attention to detail and meticulousness makes them a dream colleague for anyone who likes things done efficiently.

Just don’t expect them to keep their cool. Virgo’s are known stress heads, and their detail-oriented nature is often misdirected towards totally unimportant stuff.

Colleague most likely to: Have a pharmacy’s worth of medicine in their handbag. 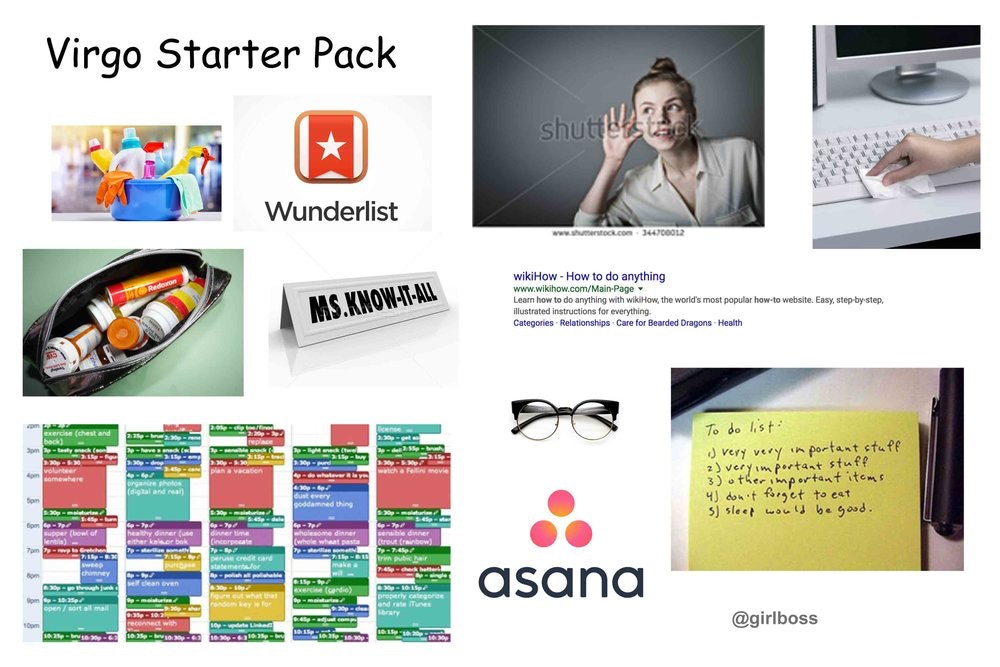 Libras are the natural light of the office, and the life of any office party. They’re warm, gracious and friends with everybody. They’re clever as hell, and great at negotiating. They hate gossip and love to be fair at all times.

They can also be incredibly indecisive and unable to make a stand when it’s crunch time. Often, they take things too personally as well. But at least they’re kind…to your face.

Colleague most likely to: Sit on the fence during a heated discussion. 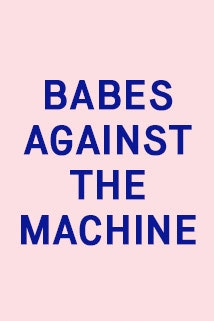 Scorpios have sharp insight into the mind and motivations of their colleagues. They empathize well, they’re diligent and highly-focussed on the task at hand. Unfortunately, they usually feel wronged by people and don’t forgive even the most innocent of slights.

If you don’t want your work buddies to know all about your dirty laundry, stay away from Scorpios. They’ll draw all the goss out of you, and share nothing in return, those cheeky devils.

Colleague most likely to: Hold a work-grudge for a million years. 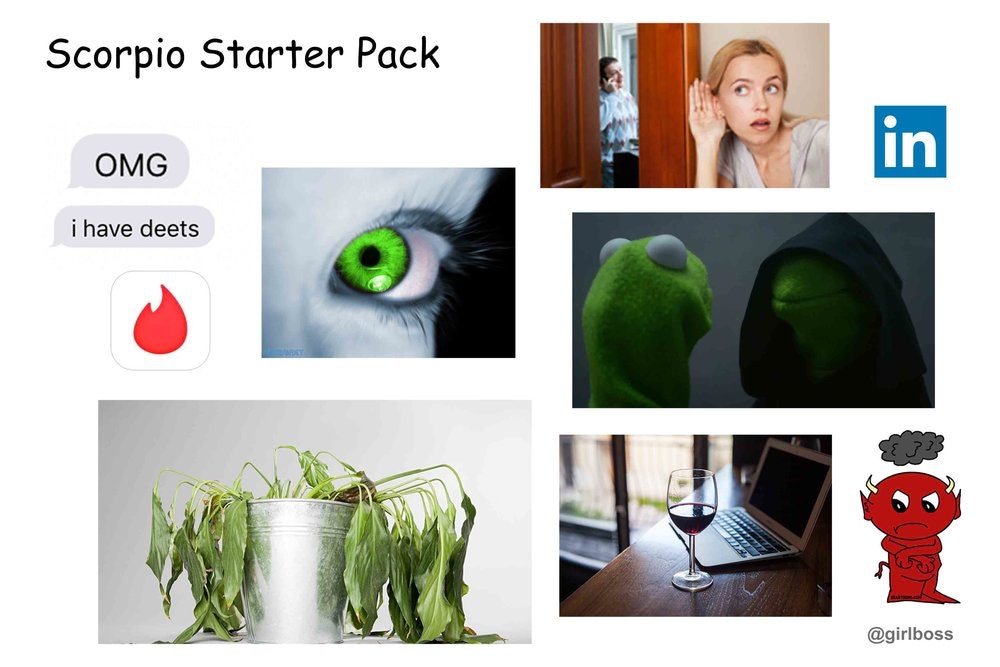 Fun and funny, Sagittarius colleagues or bosses will make you laugh, and in doing so, have you wrapped around their little finger. They’re highly loyal to their own convictions, and love a good debate.

They can also be a bit childish if they’re need to always be right rubs people the wrong way. They can be a little too proud, and too know-it-all in the way they conduct themselves. But real talk; there’s no one better to attend a holiday office party with.

Colleague most likely to: Suggest everybody get shots. 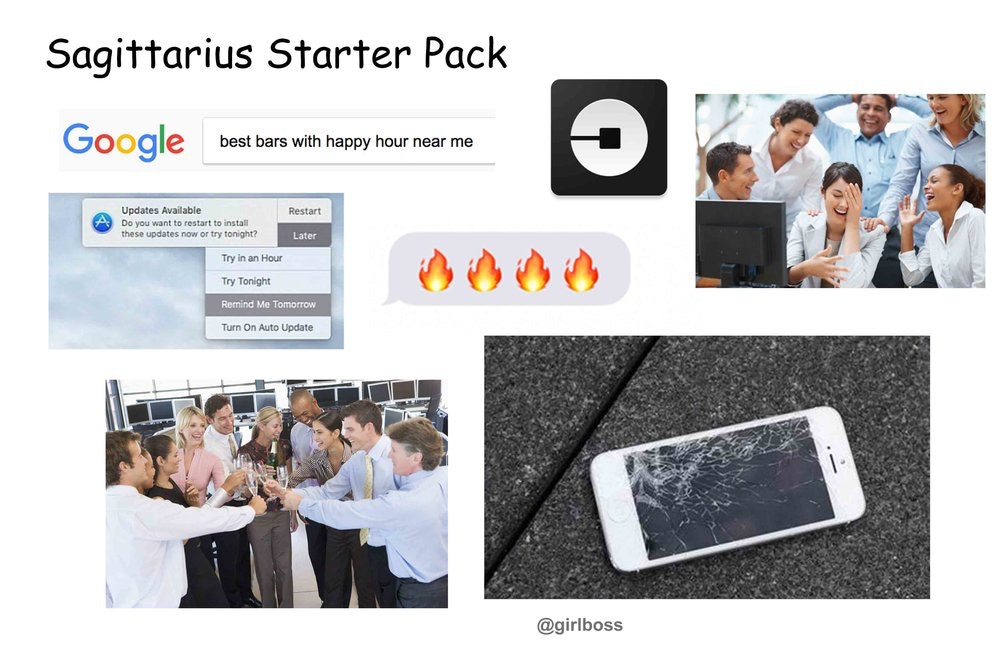 Capricorns in the workplace are ambitious, competent, generous and just a little bit prone to dictatorial communication styles. Show them you respect them, tell them exactly what you need from them, and they’ll be one of the most dependable work pals around.

But when it comes to sudden change, adaptability or situations that require high-level interpersonal skills, Caps might not quite be the chilled-out co-worker you wish you had.

Colleague most likely to: Tell everybody else how to do their job. 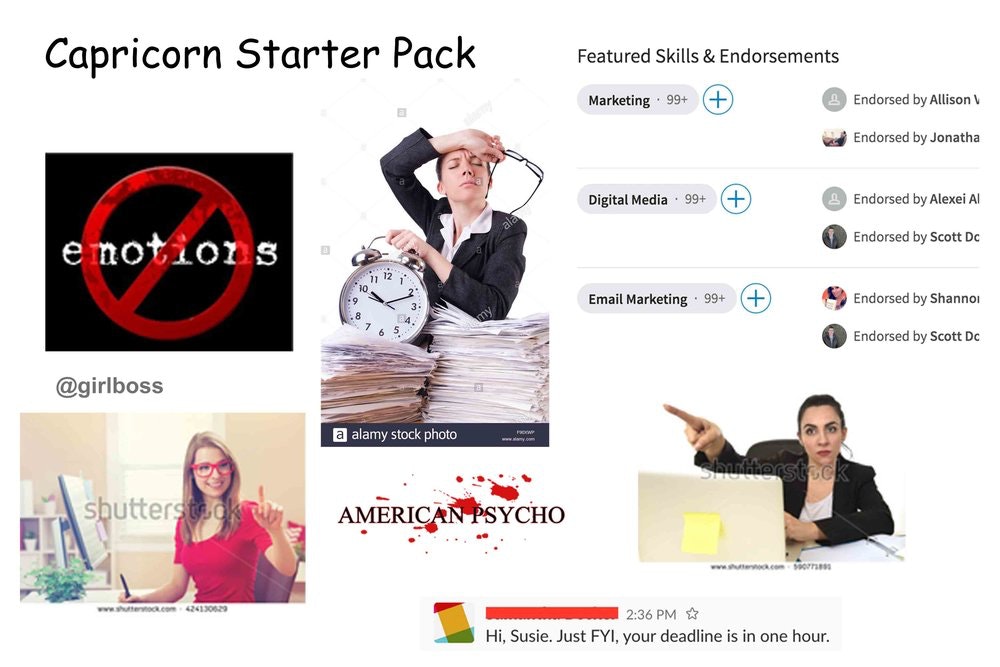 Aquarians are curious, unique and highly intellectual work colleagues, who appreciate innovative thinking. While being hard workers, they like to do things a little differently.

Problems arise for this sign when they’re progressing faster than everyone else, or when their ideas edge a little too close to the peculiar than their work friends (or bosses) would like. They might be in their own heads, but their dedication to the underdog will always be appreciated in HR meetings.

Colleague most likely to: Have a bizarre, but adorable, lunch time ritual. 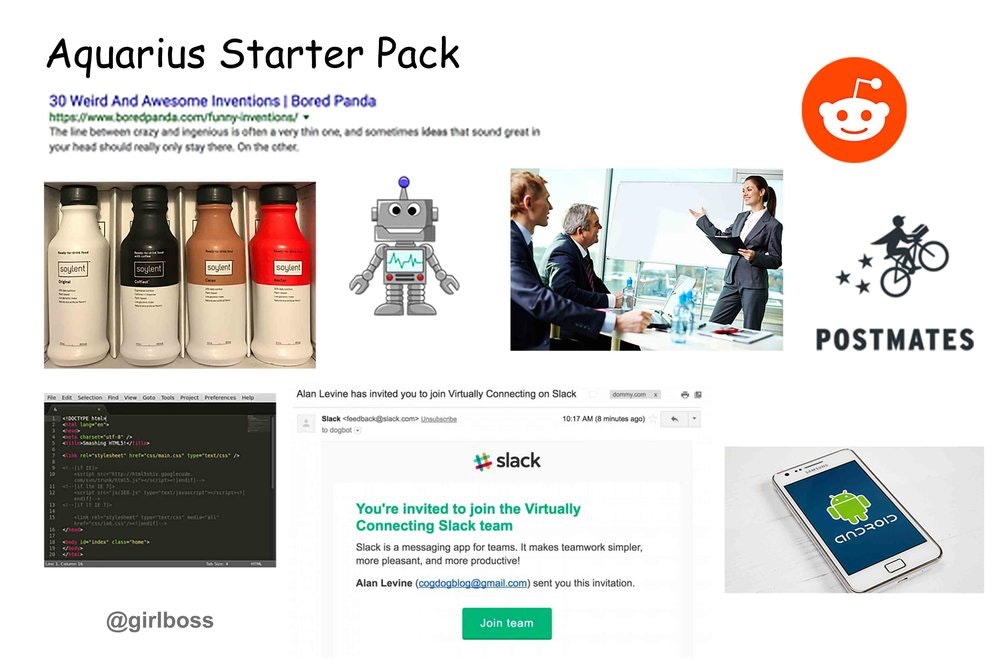 Pisces are the ultimate empaths when it comes to picking up on colleague #feels. They know what you need and they know how to make you, and themselves, feel good. They’ll bend over backwards to help a work pal out, and won’t think twice about sacrificing their free time for the greater company good.

That said, they probably have the hardest time keeping their feet on the ground, and their changeable, emotional personality means they’ll take most things to heart.

Colleague most likely to: Cry and their desk. 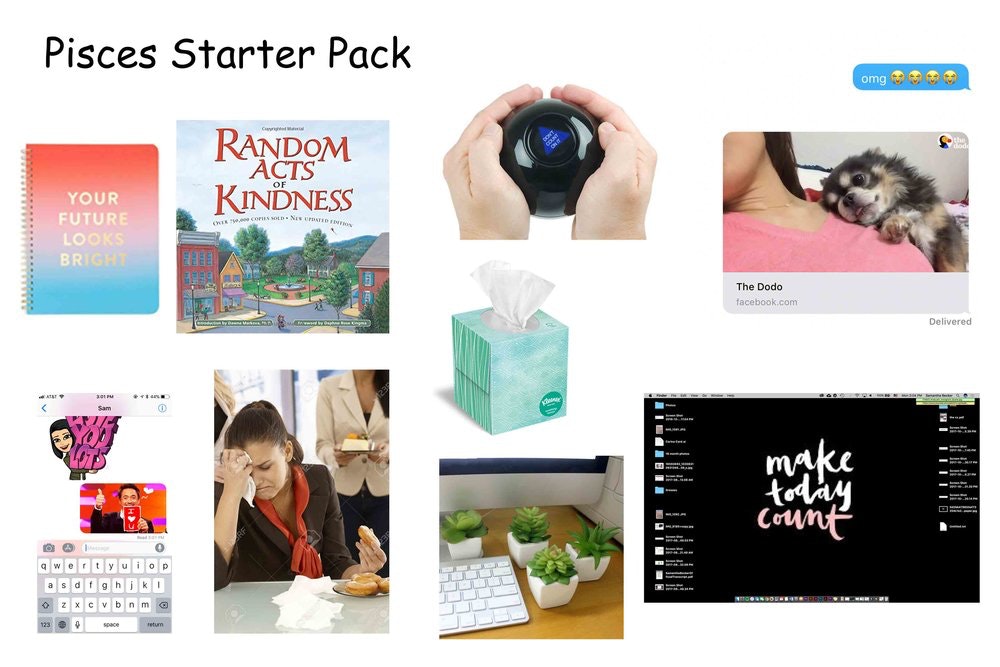 The best place to meet like-minded women IRL is at the Girlboss Rally. This year, we’re hosting six distinct networking sessions in The Mixer, designed to help you connect with new friends, colleagues, and co-founders. To get in on the action, register now at girlbossrally.com.