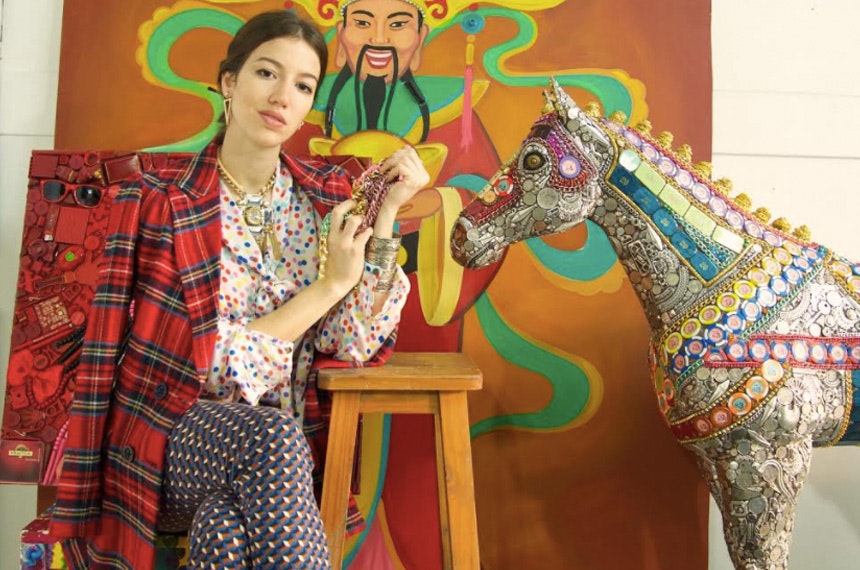 Elisa Insua is a popular artist of the Instagram age, so why is she moving across the world and leaving her art supplies behind?

Elisa Insua’s Buenos Aires studio is littered with the detritus of consumerism. Cell phones with cracked screens, calculators cast off after marching out of a final math class, little plastic toys like those found in cracker jack boxes, empty makeup containers, and broken necklaces are sorted by color, shape, size, theme, or not sorted at all.

There are thick stacks of notebooks full of ideas and drawings, and somewhere in the middle of it all is the artist, carefully gluing a tiny plastic toy into place on one of the three-dimensional collages that will, once finished, be posted up on Instagram to a flurry of likes and comments from her 41,000 followers.

Works like “For Sale” are playful and pop-y, but they’re more than that. Within the thousands of technicolored pieces of trash, carefully glued together to form banknotes and bar codes, or encrusting a gold-toned coffin, is a thinly veiled statement on consumerism, capitalism, economic inequality, aspirational ostentation, and the hedonic treadmill. 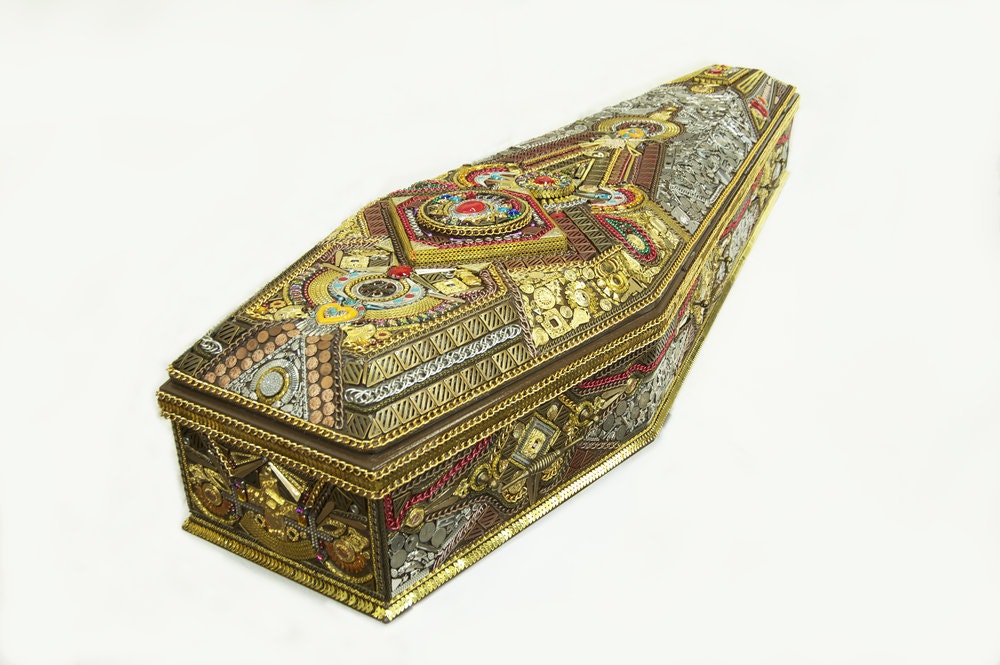 For Insua, the medium came before the message. She began to play with the knickknacks left in desk drawers around her parent’s house while still in high school. Her experimentation continued through University, where she studied economics.

But, she’s quick to add, “I didn’t have any pretensions of being an artist or to sell my work, or to live from it, or to dedicate my life to it. I just had to do it. I needed to do it.”

After finishing university and setting out to use her degree in a traditional professional environment, she came to realize that there was something in her work that went beyond the playful images that she’d first started creating as a teenager.

“After 4 or 5 years of working with discarded materials,” she says, “I realized how much it had to do conceptually with what I had studied back in university, so I started building that bridge between economics and my work.”

It wasn’t a stretch. Even without the concerted effort, the pieces had always asked the question of what it means to live in a world of disposable “stuff.” Insua started re-reading her economics textbooks, trying to parse out what it was exactly that she had been doing subconsciously.

“I was talking about the circles of consumption and capitalism,” and recognizing that within her work made it “a lot tougher and stronger,” she says.

A few shows had led to a few sales and a few sales to more shows. Success gave her the confidence to leave her job to pursue art full time, and all the while her social media platform had been growing. It was all based on a style of work that is purposefully accessible, visually striking, and that Insua enjoys making.

However, the expectation to create that particular kind of work has—11 years after she first started gluing small plastic things to oversized canvases—taken on the heaviness of the objects themselves. It weighs her creative mind down and, she fears, threatens to stagnate her growth as an artist.

So she’s moving to Madrid. She’s leaving her studio, her boxes and boxes of objects, her glues, and her canvas’ behind. She doesn’t want to do the same work that she has been doing in Buenos Aires. “I want to be inspired by the place, and to try to develop something new,” she says with an audible smile.

The artist isn’t scared that inspiration won’t hit, but sheis nervous about how her fan base will react to the shift in her work. Her collages are instantly identifiable, they are what she is known for, and it’s not uncommon that followers complain when she shares work that strays even a small step away from what they expect to see from her.

And yet, repeating what is easy or what you have become known for isn’t, she believes, a recipe for long-term success. She thinks, “the hardest thing for an artist to do is to work against their talent, or against what comes out naturally.”

Insua’s work may be Insta-famous and thought provoking, but it’s pushing herself past it, that will open up a new chapter in her progression as an artist.

She’s still fascinated by the tactile, and she’s especially curious about playing with neon signs and 3D printing, so don’t be surprised if her work remains loud and playful.

But in a world where longevity is perhaps the most elusive career goal and sticking to what you know is an easy path to follow, she’s ready for a second act.