While Susan Miller’s Astrology Zone has my heart, there’s a new, much more aesthetically pleasing horoscope app that you have to try. Co—Star was created by Banu Guler and two of her ex-VFILES colleagues, Anna Kopp and Ben Weitzman.

They wanted to use NASA’s real-time data to generate personalized horoscopes based on your time and place of birth, plus a planet-by-planet compatibility run-down. Which is handy.

“Millennials no longer believe in religion, in marriage, in bar soap, in Applebee’s,” said Guler in a statement. “But everyone we know reads Susan Miller or Broadly, knows when Mercury is retrograde, and gets their natal charts from sites that haven’t been updated since the 90s.”

And she’s not wrong about the thriving interest in astrology among young people. According to research published by the National Science Foundation in 2014, fewer and fewer Americans reject astrology these days, as opposed to earlier years. “The comparable percentage” of skeptics, the report states “has not been this low since 1983.” 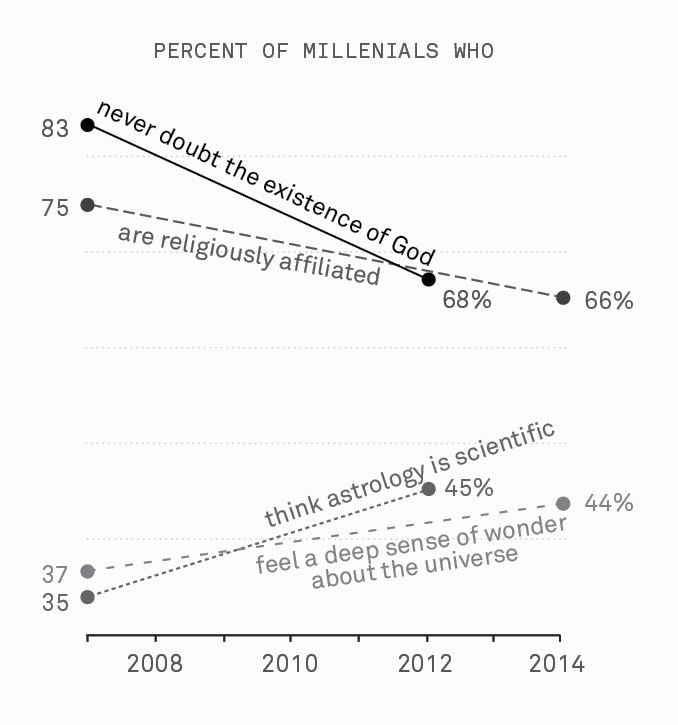 That same report was what kicked off a summer of app-building for the three young founders involved. “We thought there was a huge opportunity to create the first astrology experience that users actually love—one they actually want to use every day,” said Gular.

“That’s what we’ve created with Co–Star—an AI-powered suite of tools that understands how people already connect with and talk about astrology.” And the results kind of speak for themselves.”

The app is made for hipster astrology lovers, not middle-aged Aunties who collect dolphin figurines and play with angel cards (although new age hipsters *ahem, myself included* are partial to exactly that kind of pastime too).

Instead, the app is clean and cool, without the costs typically involved in consulting with an intuitive astrologer IRL.

Instead of a professional reader, the app uses a “natural language generation engine” to give personalized readings for users who want a quick AF glance at the stars.

Of course, it’s no replacement for the real thing (those birth chart readings average around $150 for a reason, kids) but it is more fun than the majority of apps in your phone right now. And if you have a crush, fire up their birth info and get star-stalking.

Oh, and it costs literally nothing. Your destiny awaits. The Co–Star iPhone app is available in the App Store.8/27/2