It’s fall, which means you can’t just grab a piece of fruit for breakfast on the way to work anymore.

Well, you definitely can, but admit it: What your body’s really craves is some nourishing, energy-boosting and seasonal brekky treats. Don’t fear! Nutritionist and yoga instructor Lola Berry is here, and the Australian author of The Happy Cookbook has some excellent advice for you, breakfast-wise.

These recipes are designed to be fuss-free, easy to make alternative to going out for brunch on Saturday morning, or grabbing an egg and cheese roll on your way into the office (although, they’re delicious.) How does fried banana, baked pears in coconut porridge, and pumpkin pie pancakes sound? We agree; delicious.

Here’s how to make them yourself. Take it away, Lola.

Fried banana with toasted coconut and macadamia butterServes: Two, or one if you like seconds. 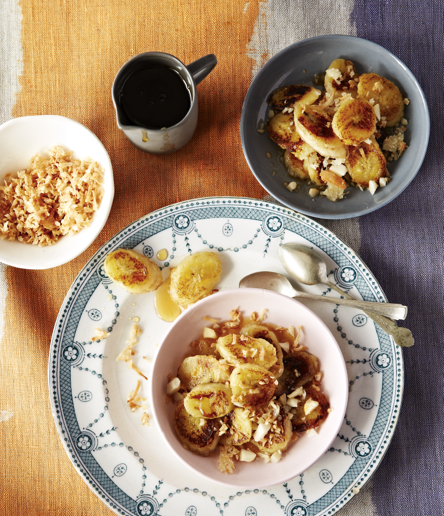 This little creation is a bit of a knock-up recipe that came to me one morning when I was living in my little flat in Melbourne, Australia. It’s quick, so easy and the flavor is out of this world and because of all the tryptophan in narnies (that’s my word for bananas,) you’ll be feeling happy, as tryptophan is the precursor to serotonin which is our “happy neurotransmitter.”

Now this little dish might not look too pretty but boy oh boy, what it lacks in looks it makes up for in a flavor bomb.

Preheat your oven to 180 degrees, get yourself a lined baking tray and sprinkle the shredded coconut evenly over the tray, then top with two spoons of melted coconut oil and two tablespoons maple syrup, make sure the shredded coconut is covered nicely in the mixture, then pop in the oven and bake for 10 to 15 minutes. You’ll know when it’s ready the whole house will smell out of this world, and the coconut should have gone a golden color.

Then pull out of the oven and set aside to cool. Now grab your fraying pan and pop the remaining two tablespoons of coconut oil in, and to that add your banana discs, toss them about for 20 seconds or so, then add the maple syrup and cinnamon, they’ll only need a minuet or two. Watch these guys, they burn real easily. Once they’re cooked, grab yourself 2 little bowls, and place half the mixture in each bowl, then fold through 2 tablespoons of the maca butter in each creations, you can drizzle some of the cooking juices too, they taste delish, then top with your toasted coconut (you’ll probably have a bit of the toasted coconut mix left over, used it as a smoothie topper if you od or add it to your trail mix), to finished this little gem of a knock up off drizzle with maple syrup and try not to have a second serve! 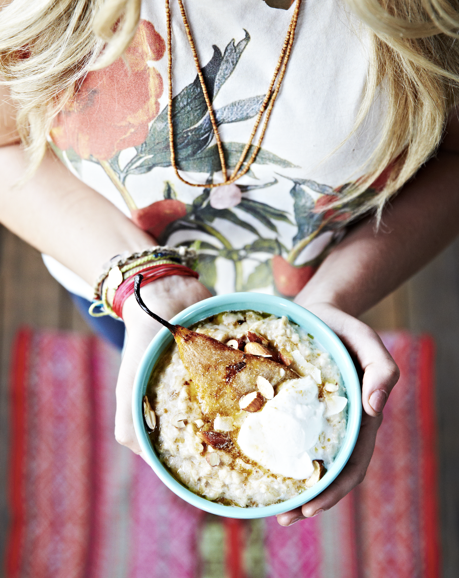 Pears are not only super delishimo (especially when they’re baked) but they are one of the most awesome sources of fiber and you gotta get that fiber.

Preheat your oven on 180 degrees. Pop your oats into a pot on a medium heat.

Add the coconut milk and cinnamon, and simmer for 5 to 10 minutes until the oats are soft. While the oats are cooking, pop your pears, cut them in half on a baking tray a sprinkle with coconut sugar, cinnamon and dot the butter over the pears.

Then bake for 15 to 20 mins or until they’re nice and golden, the size of the pear will change the cooking time. Your oats will take about 15 minutes (you’ll know when they’re ready, they’ll look super creamy and tender). Then pop into serving bowls, top with the pears, and tip any of the sweet juices from the baking tray over the oats. Then top with yoghurt, shredded coconut, and a little “good luck sprinkle” of coconut sugar. 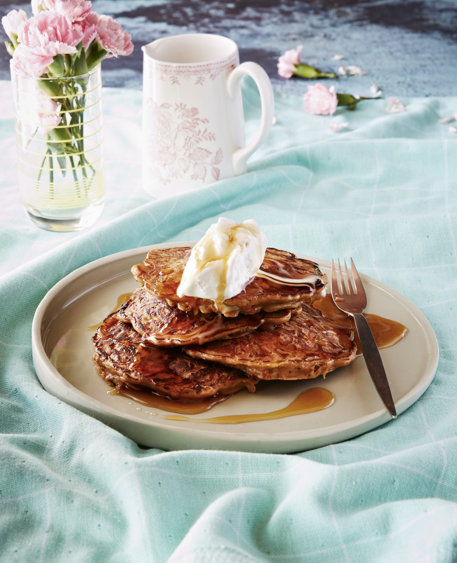 I love spices so anything that reads pumpkin pie makes my eyes light up! And I’ve never had pumpkin pie as breakfast before. So for all the pumpkin pie nerds out there, this one has been created for you! This recipe is totally gluten free too, so everyone should be pretty happy.

First up grate your pumpkin.

In a larger bowl, pop your pumpkin in, along with quinoa flour, almond milk and eggies, then add your pinch of salt and spices. Note, if the mixture isn’t runny enough just add more almond milk until you get the consistency you’re after. Then pop two tablespoons of coconut oil into your frypan on a medium heat and pour some of your mixture in, cook on one side until the edges start to go golden and you can see bubbles n the middle starts to occur.

Then flip! It will only need a minute or so on the other side, then serve with maple syrup and coconut ice-cream. Not only does this make an awesome breakfast but it’s also a pretty impressive dinner dessert treat!