Home / Read / What Every Woman Should Know About... What Every Woman Should Know About Turning 30

Nobody ever tells you this, but… turning 30 is the best thing you’ll ever do. Gotham star Erin Richards gets honest about why life got so much better for her in her thirties.

There’s a song by British songwriter, Lily Allen, called “22” where she talks about a woman approaching her thirties. The lyrics are:

That song might only be eight years old, but the notion of a woman’s life being over at 30 is wildly out of date. I’m a 33-year-old woman and I’m living the happiest years of my life right now. There’s this expectation that we have to freak out and hit the panic button as we approach the big 3-0, (and I know that’s true for so many people), but I can’t get on board with that. So I’d like share my thoughts on why you shouldn’t fear this milestone—but embrace it! Because truly, turning 30 is the best thing I ever did.

I spent my twenties not really knowing who I was—and trying to be someone everyone would like. After turning 30, all of that went away. Not overnight of course, but not being in my twenties any more meant I no longer felt like a “stupid young girl,” a role many parts of society (you know the types) would force me to play on a daily basis.  Turning 30 meant I could finally say, “I’m a 30-year-old woman, I know what I want. Now get out of my way.” And I did know what I wanted—or what I didn’t want, to be more precise. I didn’t want to be in the relationship I was in, and I didn’t want to be in the U.K. anymore. So, I booked a job in New York, ended my relationship, left for America, and never looked back.

One of the greatest things about my thirties has been that I’ve stopped caring so much about what people think of me (which is quite a feat considering—as an actress on television, people often like to tell me what they think of me!). I’ve finally started to feel comfortable in my own skin. I dance like no one’s watching, I no longer say ‘yes’ to everything based on my raging FOMO,  and I now dress in the clothes that make me happy—not the ones that fashion dictates I wear.

The endless need to be at the best party, chasing the next high, hanging with the cool kids? That’s all gone away.”

The endless need to be at the best party, chasing the next high, hanging with the cool kids? That’s all gone away too. I feel the freedom to plan my social engagements around the friends I actually like; the people who give me energy and love and help me build up my self-worth, rather than the ones who might try and pull me down a few rungs or the ones who are only fun when they’re blind drunk.

Since turning 30, dinner parties have become a thing, but not the highbrow, awkward “let’s all prove how much we know about Jungian philosophy” dinner parties you see in films. The kinds of dinner parties where you cook one big curry and everyone sits around and catches up, because you want to talk to (and can actually hear) the people you’ve chosen to be with. 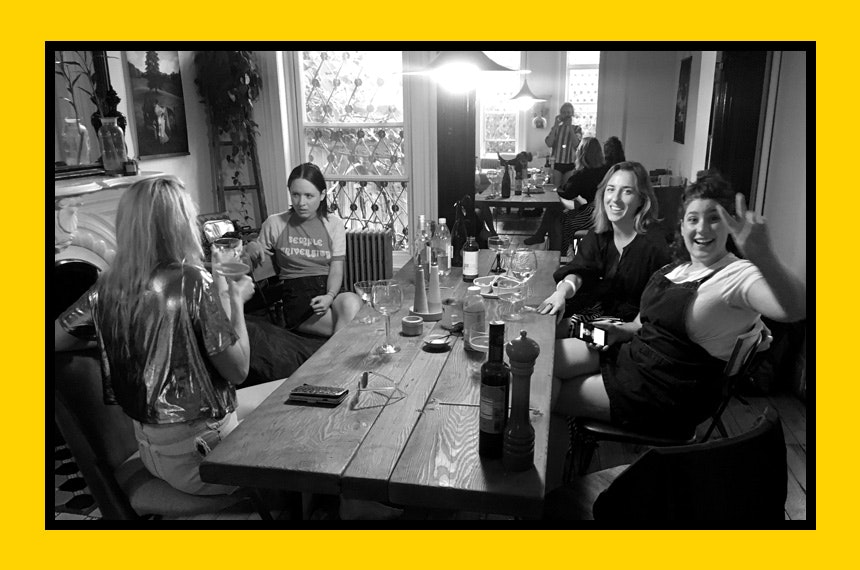 Here’s what I’ve learned from all of this: Your thirties are about working out what feeds your soul and then nurturing that. You get to spend more time alone, and being in your own company becomes something that is enjoyable rather than a rabbit hole of anxiety and self doubt. You start doing extra-curricular activities that make your heart sing. Things like pottery classes and gardening; I never thought I would say that, but it’s been a beautiful experience. I grow and cook with my own herbs now, for crying out loud!

Another thing that’s happened gradually over the past few years is that my relationship with my parents has changed. They’ve always supported me and I love them dearly, but recently I’ve come to see them more as equals. As friends. Warning: This brings with it the stunning realization that they too are fuck-ups! You see that these people, who you previously thought of as all-knowing and infallible, are actually just like you.  They make mistakes, but ultimately they tried their best, as you may do one day if you choose to have children of your own.

In my thirties I’ve discovered therapy; I’m a big fan. I’ve explored everything from the conventional (psychotherapy/NLP) to the more ‘spiritual’ (meditation, astrological readings, and cacao ceremonies) but I love any form of self-discovery and self-reflection. I believe the world would be much better off if everyone could deal with their own shit before pointing the finger at others. Since turning 30, I’ve benefited the most from a great deal of inward reflection and working out exactly what I want from life. I don’t think I was fully able to make space for inner work in my twenties, simply because I was dealing with so much pressure on my outer self. I needed to work through and reject some of that expectation and pressure before I could get to know who I was—and who I wanted to be—internally.

That’s the absolute best thing about getting older: You start to know yourself more fully with every passing year. To become a more fully realized version of yourself is such a gift. It also puts you in a much better place to choose a partner in life (if that’s something you’re interested in.) Personally, I’ve made a huge discovery about myself and the men I choose in the past month, and it has completely changed my perception of love and what it means to be in love. Essentially by knowing myself better, I‘m better equipped to find a partner who complements me and can balance, rather than “complete me.” I’m no longer trying to fill a void; theirs or mine. I have learned to love myself first, then invite another person in to share in that love.

And speaking of sharing love…the sex I’ve had since turning 30 has been the best of my life. What I’ve come to realize is, as women, we don’t have to “do” anything. I learned that I can stop trying to be something expected in the bedroom, and just enjoy myself. If you find a partner you have incredible chemistry with—and by that, I mean the chemical makeup of the two of you causes fireworks to go off in your head—then all you have to do is lie back and enjoy each other.

That’s the secret, not just to great sex, but to all of this: Just be you, be communicative, be present, and all will be (at least a little bit) more beautiful.

Erin Richards is a Welsh actress and a star of Gotham, airing Thursday nights at 8 p.m. EST on FOX. On the show, she transforms into a terrifying sociopathic villain. In real life, she’s a 33-year-old feminist, activist, writer, and director, who just completed her first short film.