What They *Don’t* Want You To Know About Money, According To Gaby Dunn

Here’s the big secret about money: No one knows anything. Despite the endless shelves of books and countless articles about money, despite the cadre of TV shows and seminars and podcasts (including my own) teaching you how to budget and cut expenses and invest and buy a home, the reality is that no one knows anything definitive about finances. Not even the experts. Especially not the experts. Sorry to ruin everything.

What we call “money media” is mostly made up of very confident guessers who are super good at conveying those guesses in an entertaining way. Think about the big TV showboaters like Mad Money’s Jim Cramer or that goddess of blazers, Suze Orman. The folks who blow air horns at people who make poor money decisions. They wear funny hats and big sunglasses as they tell that you cannot afford the new car you need so you can get your kids to school.

They grin as they condemn for not starting a retirement fund when you were in kindergarten or for not being able to predict which stocks would go down when you first invested 10 years ago. (Or heaven forbid, not investing at all!) I promise that as hot as I might look in a light-up sombrero, I won’t be using those tactics here.

As I’ve learned through my Bad With Money podcast and the reactions to articles I’ve written on my own money foibles, my willingness to admit what I don’t know is apparently rare—rarer than I thought when I started my imperfect journey of openly sharing my problems with money. It turns out that no one wants to talk about money. Not the rich. Not the poor. Not anyone in between …

In the first episode of Bad With Money, I asked random patrons at a coffee shop two questions. First was, “What’s your favorite sex position?” Everyone was game to answer that one: reverse cowgirl, missionary, 69. (I’m kidding. No one’s favorite is 69.) Even the barista jumped in with an enthusiastic “doggy style!” I heard it all. Then I asked people how much money was in their bank accounts. Everyone was horrified. “That’s a very personal question!” I heard amid gasps. People would have probably rather showed me their browser histories. (And to be honest, I would have liked to see them! I’m a perv).

“The reality is that no one knows anything definitive about finances. Not even the experts. Especially not the experts.”

Clearly, money is a subject no one wants to dissect. So let’s address the first big obstacle I faced when confronting my own money issues: stigma. Stigma, other than being a term for the sexy parts of a flower, is defined by the Cambridge Dictionary as “a strong feeling of disapproval that most people in a society have about something, especially when this is unfair.” Stigma stifles the flow of information about something so essential to our lives and it leads us to the three buzzkill Musketeers: Shame, Embarrassment, and Anxiety.

In a world where talking about money is considered taboo or tacky, money problems are personal failings, and no one wants to hear us complain, it’s no wonder that we find ourselves confused and struggling, in need of someone to blow an air horn in our faces.We have to open up about our experiences with money—the good, the bad, and especially the ugly.

Otherwise there’s nothing specific to learn. In fact, if you listen closely, you’ll notice that so-called money experts hardly ever use exact amounts. Speaking in specifics is risky, but speaking in platitudes appeals to broader audiences.

No one likes admitting they’re doing something wrong, or that they might not know what they’re doing at all. I felt the same way: I thought everything was my fault, and I didn’t want to be yelled at. I hate being looked at as if I’m ignorant for not knowing something “obvious.” I would do anything to avoid that look. I’d denounce Janelle Monae. Climb the Andes naked. Brush my teeth with salt rocks.

“Stigma stifles the flow of information about something so essential to our lives and it leads us to the three buzzkill Musketeers: Shame, Embarrassment, and Anxiety.”

The prevailing narrative goes that if you’re bad with money, you’re naive and irresponsible or defective in some other big way. Because of that you should keep that information to yourself, and if anyone finds out that you’re bad with money, you should be ashamed. MOREOVER: If you’re not actively trying to change your situation with intense strategies like strict budgets and financial fad diets that no person can possibly maintain forever, then you’re a bad person who deserves the bad situation you’ve found yourself in.

The only thing people love more than having money is judging other people for how they’re using their own money. (Example: “My money situation isn’t great but at least I’m not like my irresponsible cousin Terry! Why do you have an Equinox membership if you never go to the gym, Terry?!”)

This narrative is an extension of the prosperity gospel, which posits that if you are truly a good, smart, and worthy person, you will magically prosper. Even people who know this isn’t true have largely internalized the message. Hell, this is what I thought about myself until recently. I’m a confident person, successful in my career, happy in my love life, surrounded by friends, close to my sister, and I still believed that because I didn’t have a handle on my money situation, I must be a bad human and a worthless failure.

How could I know any differently? My friends who had jobs didn’t discuss their salaries, and my friends without jobs never explained where their money came from or revealed that they were struggling. I figured everyone around me knew something I didn’t.

“I still believed that because I didn’t have a handle on my money situation, I must be a bad human and a worthless failure.”

It came to a head for me after college. I spent my early 20s working as a freelance writer/reporter, with the occasional 9-to-5 reporting gig at various publications. When I was freelancing, I always felt deeply mortified to press the magazines or blogs I was writing for to give me my owed paychecks—which were always late (#freelancelyfe). If you’ve ever been a freelancer, you are aware of the cruel truth that a place that owes you money is never in ANY hurry to send you your check. Big payment, small payment: It doesn’t matter.

Trying to get paid becomes its own full-time job. I worried that if I seemed to need money (as a 20-something living in New York City, no duh, of course I did), I would look desperate. The optics of seeming like a “carefree New York hipster debutante” to some strangers in Cosmo magazine’s accounts payable department was more important to me than actually having money in my checking account.

Sometimes I had to literally beg in multiple emails for freelance jobs to pay me specifically because rent was due and I had nothing. (And I would tell them that! Horrifying!) Once it took a whole year for a major international publication to cut me a $500 check. And instead of being angry at them, I was mortified that I needed that money so badly. It made me feel pathetic and unimportant. They should have been embarrassed by their shitty treatment of a freelancer, but they weren’t. I was.

Don’t get me wrong: I was delighted by the bylines I got in Playboy and the New York Times Magazine. I posted about them on Facebook and received all the comments and likes and validation I could have ever wanted. People thought I was thriving. They thought I was successful. Maybe they thought I was making good money.

The negative side of my freelancing life never made it to my Facebook feed. I did not have the chance to connect to anyone else struggling financially because I never revealed thatI was struggling financially. But if everyone was pretending, then how could anyone figure out anything useful?

During college in Boston, two of my friends and I lived cheaply in a shitty house where we saved money in a jar labeled “Beer, bread and bitches.” We had no decorations in our apartment, and anyone who needed a place to crash could sleep on the living room floor. We ate mostly homemade pasta with butter. We wore clothes from the Garment District, a warehouse thrift shop in Cambridge with no regard for sturdiness or cleanliness. (Maybe too little regard. My ex-boyfriend got scabies from going through its $1 bargain bin.)

When I graduated from college and moved to New York, I lived rent free on my brother’s couch, an hour outside the city, while I looked for a job. I finally found one, writing about movies for AOL, and immediately moved in with a stranger in a Chinatown apartment where my room did not have a full wall to separate it from hers. It was not a very livable apartment. (For example, the floors were uneven, which I found out when I tried to scramble eggs for the first time.)

The people I hung out with in NYC, no matter their race or age, all had vague jobs: Musicians? Students? Writers? Ironic tattoo aficionados? I had no idea. Just like in Boston, everyone behaved as if they were on the same financial playing field without ever discussing it with anyone else.

“Everyone behaved as if they were on the same financial playing field without ever discussing it with anyone else.”

I started getting into light credit card debt. I moved a lot because I couldn’t afford anything long term. I always figured that one day, I’d get paid some sort of huge lump sum that would all at once solve my financial problems.

Living day-to-day came naturally to me. My whole life, my dad was thousands of dollars in debt from alcoholism, addiction, and gambling. On my podcast, he admitted to being “reckless and selfish” and to encouraging my mom to live in the moment too. They spend money on vacations, clothes, parties, and furniture our family could not afford. There was no looking toward the future. “Look,” he argued in his own defense, “it may have not been a good lesson, but we had a great time.”

This dynamic continues. Whereas in some families, a child in her 20s might call to ask her parents for career or money advice, my dad has called to ask me for help with salary negotiation. In the first episode of my podcast, my dad actually revealed that that very day we recorded, he’s been let go from his job working in addiction recovery therapy.

When I asked if he was OK, he casually and optimistically said, “I’ll probably get something I’d rather be doing anyway.” He often tells me “the universe will provide.”

But in all my years of life thus far, the universe has yet to sign any of my checks. 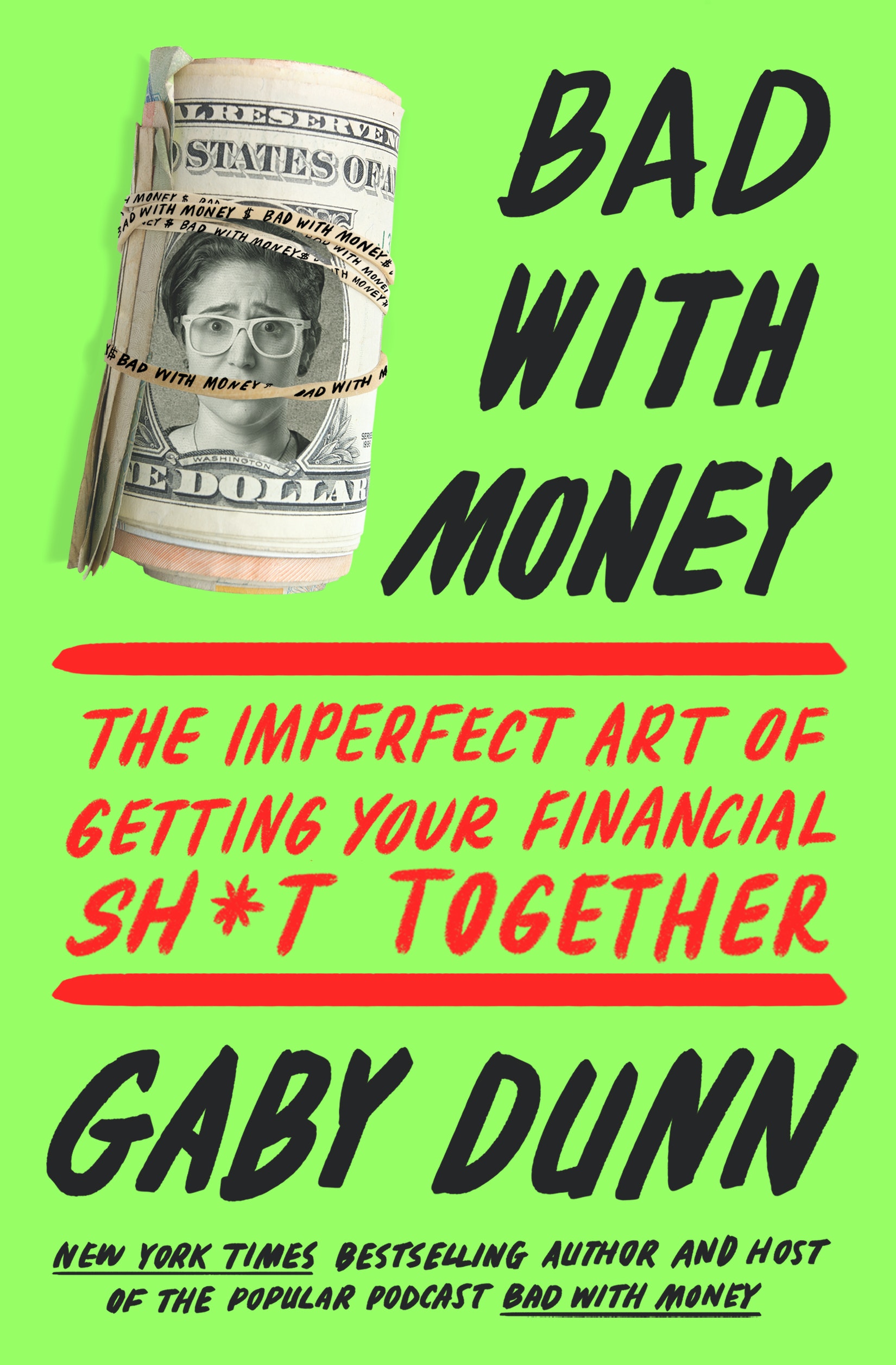 From BAD WITH MONEY by Gaby Dunn. Copyright © 2018 by Gabrielle Dunn. Reprinted by permission of Atria, a Division of Simon & Schuster, Inc.

The Vault at the Girlboss Rally is where women talk openly about money. On Saturday, June 29, we’re hosting IRL workshops to help you understand and manage your personal finances. Then, on Sunday, June 30, we’re hosting one-on-one and group Money Therapy sessions to get your most pressing money questions answered. In order to reserve your spot, register now at girlbossrally.com.