Carmen Maria Machado is a “preposterous talent” whose short story collection addresses the experiences of women in haunting, beautiful ways.

Each month, Girlboss‘ editors will be curating picks for the Girlboss Book Club. Follow along and join in the conversation all month on Twitter with the hashtag #GirlbossBookClub, and at the end of the month, tune in for a Facebook Live discussion on our page.

Our pick to kick things off? A stunning debut short story collection, Her Body And Other Parties by Carmen Maria Machado ($16.00, Graywolf Press). Check out the review below and go get yourself a copy, because mark our words: This book is gonna be a big deal. 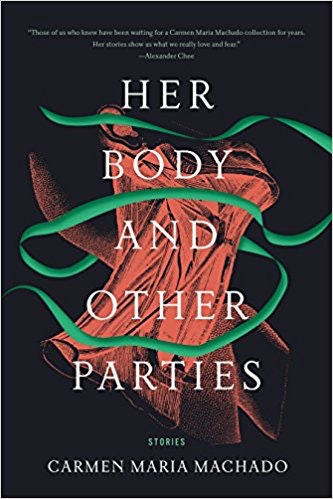 Since finishing Her Body And Other Parties, the debut short story collection by Carmen Maria Machado, there are a slew of things I’ve been telling people as I aggressively push this book on them: The prose is inventive and unrestrained, with the deliberate precision of a spider that probably, usually, kills her mates. It is comprised entirely of ghost stories, though not every story features a ghost. It’s not necessarily scary, but it’ll probably keep you awake at night.

And it’s a work of literary fiction that has proven its resonance before it even hit bookshelves today; Machado’s debut was longlisted for the National Book Award and is a finalist for the Kirkus Prize. A recent LA Timesreview describes Machado as a “preposterous talent,” and I’ve found myself hard pressed to find a better descriptor.

To state the obvious, it’s a book that devotes itself to women’s bodies. It both defends and challenges the autonomy we possess over them—both celebrates and expresses fear for the body’s triumphs over our thinking brains.

In the opening story, “The Husband Stitch,” readers will recognize almost immediately a scary story from our youths: “The Green Ribbon,” in which a girl with a green ribbon tied around her neck meets a boy, and eventually they marry. But throughout their lives, her unwillingness to let him untie the ribbon or explain why it’s there creates an unbearable rift between them. And even if you’ve never read the story, well, you can guess how it ends.

For all the horror I remember feeling as a little girl, belly down on a friend’s mattress and armed with a flashlight, as a grown woman, returning to the story in the hands of Machado brings a new level of understanding to that fable that is almost tooperfect.

The depicted marriage is tender and passionate, alluring you to the brink of the fairy tale-esque; you want, dumbly, for it to end some other way. Despite the warning signs, despite knowing how it ends, but most importantly, despite knowing the why: that the world works endlessly to have women believe their bodies are not their own.

Knowing all this doesn’t lessen the blow, and it’s a testament to the shape-shifting qualities of Machado’s storytelling.

And the opening story is only the first in a series that plays on our collective cultural knowledge and obsessions; there’s a novella-length story in the middle that hauntingly repurposes the characters, themes and format of Law And Order: SVU(an idea that surely would have raised some eyebrows in any workshop setting). Another details a woman’s sexual history as a mysterious pandemic ravages the country and the apocalypse looms.

Each story is its own, gripping universe, but perhaps even more impressive: Machado exudes a palpable sense of defiance on the page, slipping out of the trappings of what separates “literary fiction” from erotica; “serious” work from fantasy; love from lust. Her women often exist not as women with insatiable sexual appetites for the man or woman opposite them, but for sex itself—an idea so simple, yet radical in our present culture.

At the end of the month, we’ll be partaking in a Facebook Live event where Girlbosseditors will discuss the book and answer reader-submitted questions and comments that have come in with the hasthtag #GirlbossBookClub. Follow us on Twitter to join the discussion.