Home / Read / Meet the Woman Behind The Latinx-Inspired...

Patty Delgado never set out to establish a clothing or accessories company. The closest she got to imagining herself making clothes was when she’d become momentarily inspired by episodes of Project Runway. “I’d be like, ‘That’s my calling!’” she says, jokingly. “But I never did anything about it, other than make holes in my jeans and piss off my mom.”

Fast-forward to today, though, and Deldago’s brand, Hija de tu Madre, is among the most recognizable Latinx shops on social media, thanks in large part to the company’s signature item: a denim jacket with colorful sequins outlining the image of Our Lady of Guadalupe. Our Lady of Guadalupe or La Virgen de Guadalupe, as she’s known in Spanish, is the patron saint of Mexico and an iconic religious and cultural figure throughout the Americas.

Like many other first-generation Latinos who are Catholic, Delgado, 26, grew up recognizing images of saints, martyrs, and various depictions of the Virgen. But it wasn’t until she began re-examining her ancestry and claiming the Chicana/o identity that the image of Our Lady of Guadalupe took on new meaning. Suddenly, she says, she noticed images of the Virgen were re-appropriated throughout history within various political and social movements from the Zapatistas to the United Farm Workers.

“That’s when I really started to have an appreciation for that image. I started associating her with resilience, identity, and strong, brown women,” Delgado says. 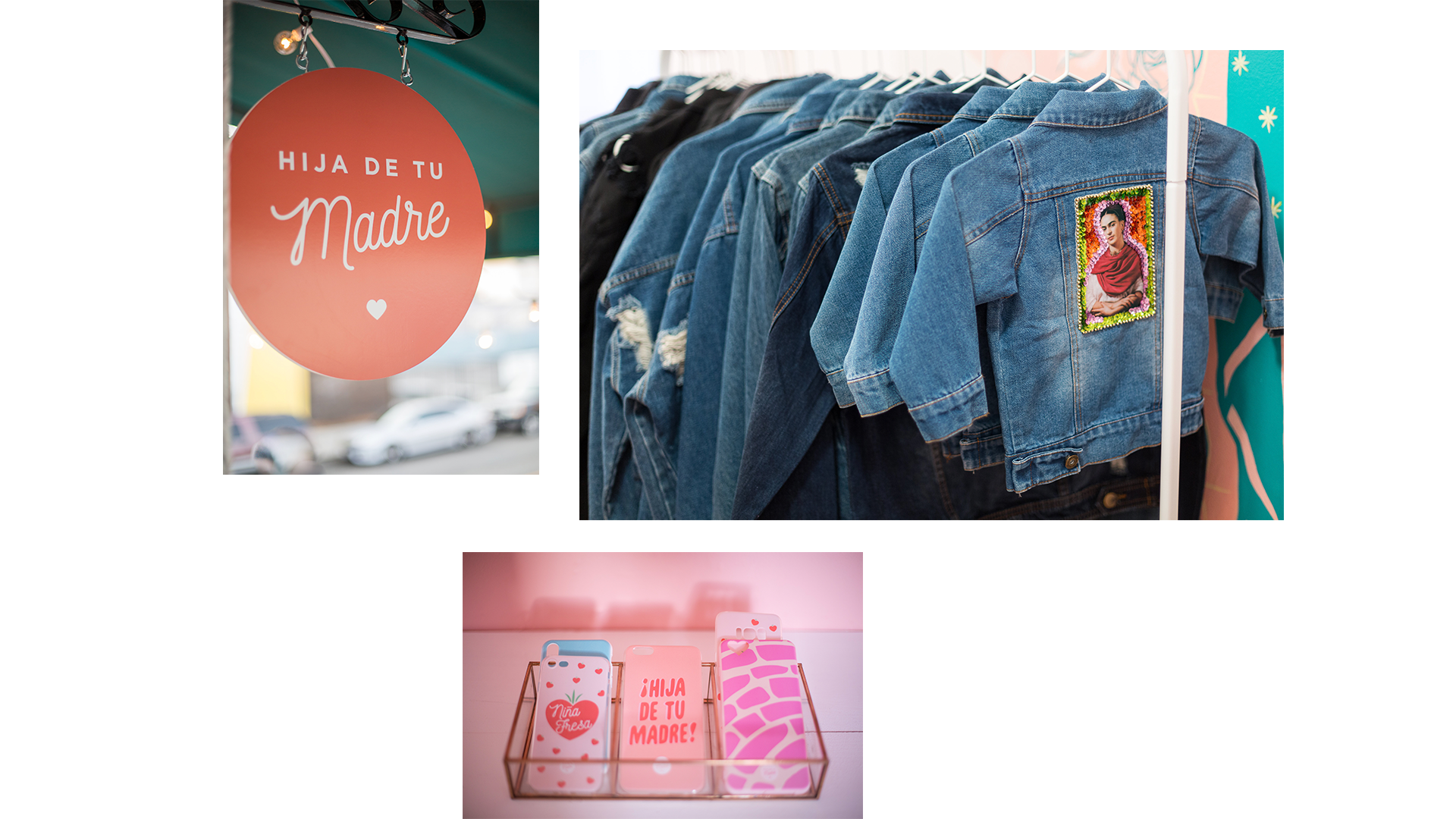 That colorful #VirgencitaJacket catapulted Hija de tu Madre into the spotlight. Delgado has also released jackets with an assortment of sequin designs like an image of Frida Kahlo alongside Latin American country flags, as well as small accessories like earrings proclaiming “Bruja,” or “witch” in Spanish. The items resonate with a community of Latinx millennials who are drawn to the bold statements around identity inherent in her work.

“It makes so much sense why she was interested in iconography. She really understood the power of these images,”says Ryann Garcia, who studied religious studies with Delgado at the University of California, Los Angeles. 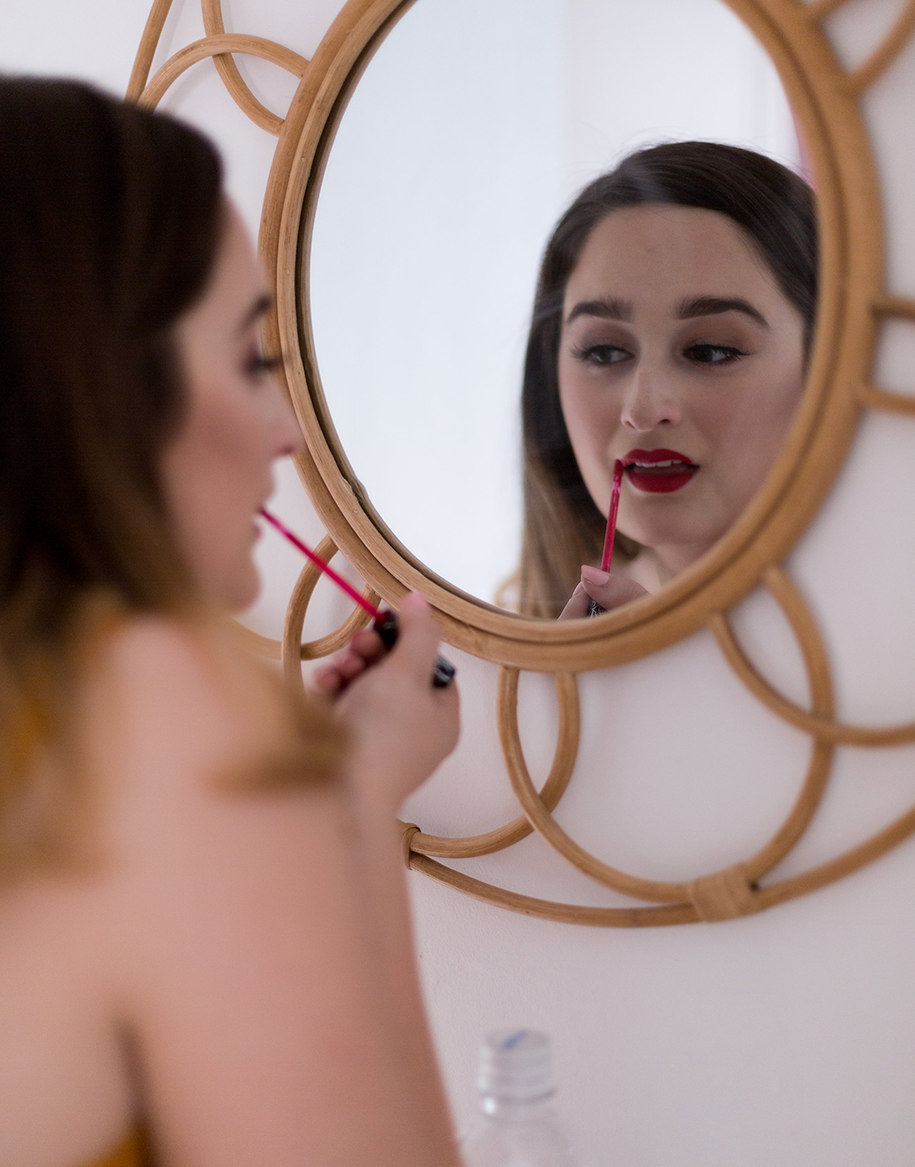 While publicity and word of mouth helped Delgado get enough sales to turn her side business into a full-time job, she was still filling orders from her living room until a few weeks ago. Things changed quickly when she stumbled upon a “For Sale” sign in the historically Chicano/Latino neighborhood of Boyle Heights in Los Angeles.

On May 5, Delgado held the grand opening for the Hija de tu Madre showroom, an intimate space on the second floor of a two-story building accessible by a pair of outdoor stairs. A few dozen guests, including family, friends, and fans of the brand showed up to the opening of the two-year-old brand’s storefront. Such a rarity is worth celebrating, said Breana Quintero, 24, director of creative operations for Shop Latinx, a site cataloguing different Latinx-owned businesses.

“Latinx online boutiques very rarely make it to a brick-and-mortar store,” Quintero said, adding that when they do, it’s often within a store carrying multiple other brands. “She’s been in business for less than two years? This is legitimately goals.” 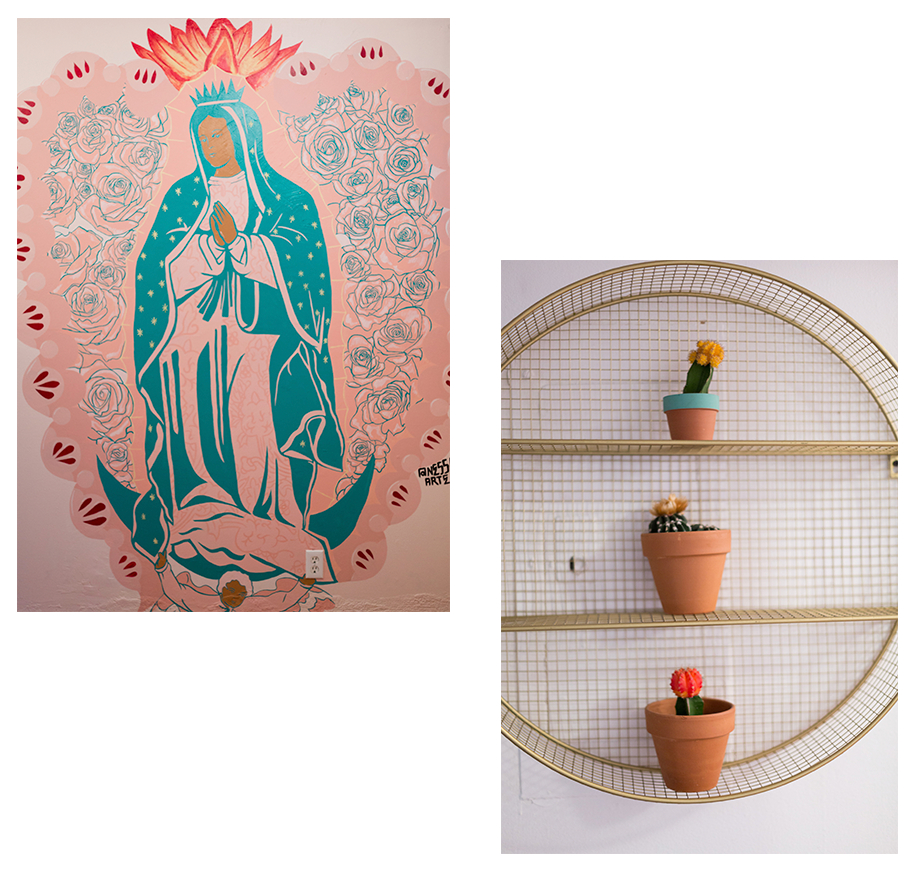 Currently, the Hija de tu Madre showroom only opens for scheduled viewings, but Delgado says she plans on expanding the store to regularly serve as part showroom, part community center with the ultimate goal of hosting workshops for other aspiring entrepreneurs. It’s part of her aim, she said, to give back to the neighborhood she grew up in.

And while Hija de tu Madre offers more designs than just the jacket with the Lady of Guadalupe, her image immediately greets visitors to the showroom, where a large mural is on display.

“In all my favorite L.A. neighborhoods that I’ve ever lived in, her image is everywhere,” Delgado says. Indeed, you don’t have to look hard to find murals of Our Lady of Guadalupe in the streets of Los Angeles. Or, now, hanging on the racks of a small store in Boyle Heights.