Need A Productivity Miracle? This ~Whimsical~ App Could Change Everything

A smartphone app to keep you from wasting time on your smartphone? Skip the hard questions and just know that Forest, our “App of the Week,” really does work.

But seriously, whowouldn’tbe more productive with less time spent mindlessly scrolling the ‘gram or incessantly refreshing your news feed to find out if your sickly grandma is even going to have health care next year?

Enter productivity app Forest. It’s kinda silly, very whimsical, and a little bossy, but it’s pretty darn effective in keeping you off your phone for stretches at a time. Here’s how it works:

You set out to plant “trees” that represent specific blocks of time, during which you are not supposed to use your phone. If you stick to it and don’t exit the app during that set amount of time, your tree flourishes and gets added to your “forest.”

If you do exit the app, your tree dies. And unless you’re an old timey robber baron or a climate change-denier, it’s hard to imagine that killing trees is anyone’s idea of a good time—even if they’re virtual. 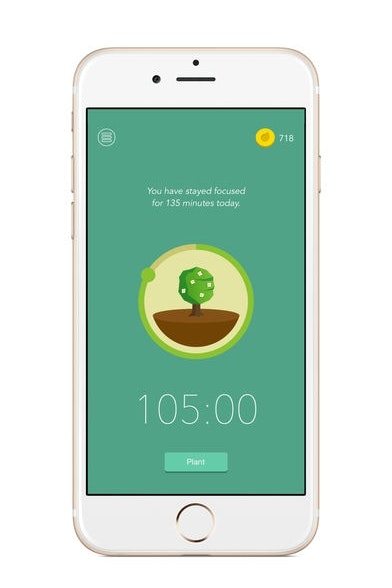 Time blocks can be set for 10 to 20 minutes, which grows you a cute lil’ bush, or up to two hours, which grows you a robust conifer of some sort. If you pick up your phone and unlock the screen, but don’t exit out of the app, it’ll issue subtly authoritarian messages like “Put your phone down,” or “Go back to your work.”

Which I found to be a little rude, if effective. I mean, it’s such a playful app—is introducing a little squirrel animation instead, to tell you “You’re doing great! Keep being a squirrelboss!” that much of a stretch?

So once you complete a session, you also start stacking virtual coins, which can be used to purchase additional foliage options such as succulents, grass, and even a pumpkin. And here’s the coolest part: You can use your accumulated coins to plant a real tree via a non-profit called Trees for the Future.

My enthusiasm for the app pretty much stops there, though, because it has the capacity to become quite intricate; you can set up an account so that you can compare your forests with the forests of other users, and judging from the app reviews in the iTunes store, it’s a battlefield out there.

You can also start tagging your time and dividing it into blocks for work, study, social, rest, entertainment, etc., but for such a simple concept, that whole process feels unnecessarily time consuming. Which is a bit ironic.

Of course, there’s nothing about this app that stops you from messing around on the internet from your computer, so you’ll still need to maintain some modicum of self-control. But if you need a little bit of playful motivation, Forest may very well be the quirky app that delivers it.

Download the app and start planting your forest for $1.99.