Who among us has ever accomplished anything noteworthy in those idle days between Christmas and New Years Eve?

But nuclear scientist Chien-Shiung Wu turned the discipline of physics on its head during that very window in 1956. In an immensely technically difficult experiment, she overturned a physical principle called the conservation of parity. 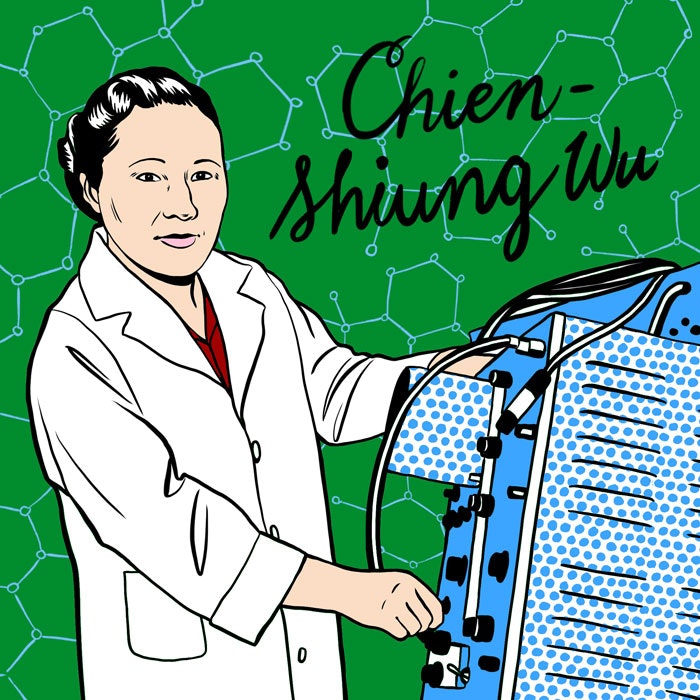 It was a historic moment in physics that shattered a theoretical structure at its base, said Nobel laureate in physics Dr. Isador I. Rabi. The New York Times ran a front page story on the discovery. However, while her two male colleagues were awarded a Nobel Prize for their work, Wu was excluded.

As an ultimately decorated experimental physicist, and an outspoken Chinese female one at that, Wu’s path-forging legacy transcends what is measurable in this universe.

Portrait of our courageous hero as a young woman

If Marvel were creating a comic book with a Chinese physicist as the super hero, they couldn’t pick a better name than Chien-Shiung. It means “courageous hero.”

The arc of Wu’s life might have bent differently had it not been for two important factors. A reformist revolution in China ushered in modern attitudes towards education just around the time she was born in 1912. What’s more, Wu’s particularly progressive father believed so fervently his daughter should go to school, he founded one himself.

As a result, Wu became one of the first girls in China to receive a formal education, according to science writer Maia Weinstock. In a wonderful side note, Weinstock is so inspired by Wu that she made a Lego figure of the physicist.

After high school, Wu matriculated at university as a math major, later transferring into physics. “Ignore the obstacles,” Wu’s dad told her. “Just put your head down and keep walking forward.”

Wu passed up an opportunity to study her PhD in physics at University of Michigan, where women still weren’t allowed to use the front entrance. Instead she headed for University of California’s Berkeley campus, which was fast becoming the, ahem, nucleus of atomic research.

Over the years, she established herself as a leading experimental physicist and an authority on nuclear fission (splitting atoms by nuclear reaction or radioactive decay).

She was a workaholic and painstakingly meticulous, to the extent that Nobel laureate Leon Lederman described collaborating with her as “agony.” But he said “it taught me a lesson about what it means to be a great scientist. That is, that validity of your results must have the highest priority.”

Wu was passed over for permanent research opportunities at Berkeley (noticing a theme here?), but a job offer from Princeton made her the university’s first female professor.

Despite being a non-US citizen, she was invited to assist in the Manhattan Project, the US government’s top-secret operation that brought together scientists, military, industry and civilians in a single pursuit — to build an atomic bomb.

Wu spent the last year of the Second World War working on the Project. She made major contributions to the development of the Little Boy and Fat Man bombs. These same bombs were ultimately used to decimate Hiroshima and Nagasaki. In other words, the Manhattan Project’s consequences are tragic and complicated.

By splitting the atom, scientists “unleashed energy never before seen on earth,” and launched the world into the atomic age. A few years later, J. Robert Oppenheimer (a renowned theoretical physicist and professor with whom Wu studied at Berkeley, and who became known as the “father of the bomb”) reflected on the role of science and urged for greater dialogue with the citizenry.

In a publication founded by Manhattan Project scientists who “could not remain aloof to the consequences of their work,” he wrote that there was a growing consciousness among physicists about the implications of their scientific achievements. It was a historic turning point.

Kind of a big deal

Wu literally wrote the book on beta decay, a type of radioactive decay in which an atom emits electrons.

This expertise led to her being approached in 1956 by theoretical physicists Tsung Dao Lee of Columbia University and Chen Ning Yang of Princeton. They had a hypothesis and needed her help to test it.

The hypothesis focused on a principle called Conservation of Parity, which had been considered incontrovertible for so long it had reached law of nature status. The principle was that nature, “at its most basic level,” doesn’t discern between left and right. So there is a fundamental symmetry in how nature behaves, including at the level of atomic particles.

Dr. Lee and Dr. Yang suggested that parity isn’t conserved in some nuclear reactions; specifically those involving the “weak force.” If you have no idea what the weak force is, it’s one of four forces that govern the universe. No biggie.

The other three forces are gravity, electromagnetism and the strong force. While these three hold things together, the weak force makes matter fall apart. (This Live Science breakdown has some comprehensible further reading).

Dr. Lee and Dr. Yang suggested an experiment. Dr. Wu had to figure out how to actually make it happen.

In a cryogenics laboratory in Washington D.C, Wu’s team placed radioactive cobalt into a strong magnetic field that lined up the north-south magnetic poles of its nuclei. Supercooled to minimize the atoms’ random thermal motions, the scientists watched as tens of thousands of electrons were ejected. A majority went primarily in one direction.

The following year, Dr. Lee and Dr. Yang were awarded the Nobel Prize in Physics. The fact that Dr. Wu was not included has punctuated accounts of her achievements ever since.

As Weinstock noted, “it was not the first time theorists would win a Nobel while a key experimentalist who did the crucial work to back them up did not.”

While playwright Clare Boothe Luce articulated a widely held sentiment, saying “When Dr. Wu knocked out that principle of parity, she established the principle of parity between men and women.” Wu’s achievement underscored that female physicists were every bit as capable as their male colleagues.

But it does no justice to Wu’s legacy to let her scores of stellar achievements be overshadowed by this omission. She received the US National Medal of Science (the nation’s top prize), the Wolf Prize, Tom Bonner Prize, the Columbia’s Pupin Medal. She was the first woman elected president of the American Physical Society and first also to receive an honorary doctorate in science from Princeton.

While presenting the award, the University’s president said Wu had “richly earned the right to be called the world’s foremost female experimental physicist.” In her later years, Wu became a powerful advocate for girls interested in STEM professions.

“Why didn’t we encourage more women to go into science?” she asked at an MIT Symposium in 1964. “Unfriendly social atmosphere and psychological hindrance are at the root of the problem.”

She continued: “I wonder whether the tiny atoms and nuclei, or the mathematical symbols, or the DNA molecules, have any preference for either masculine or feminine treatment.”

It would take a brilliant scientist to find a way to measure it.