Our Book Club Pick Asks The Question Everyone Wants Answered: Why Do We Cheat?

It’s a tale as old as time: People couple up, and then people cheat. The latest “Girlboss Book Club” pick takes a deep dive into that perennially messy, haunting question—why?

In part because it’s a question with no definitive answer, in part because it’s a subject we don’t necessarily wantto confront, the cultural conversation surrounding infidelity is one that, even in 2017, is largely conducted in a whisper, buried under layer upon layer of shame.

Despite the countless songs, novels and works of art addressing this very topic, when we’re asked to look infidelity in the face, the vast majority of us do a metaphorical (though maybe literal, too) one of these:

Questions such as: Are humans actually meant to be monogamous? Has the notion of an “ideal relationship” evolved into an impossible standard of being both a surprise-filled sexual landscape and the primary source of safety and stability in our personal lives? Was marriage actually more effective when it was more of an economic arrangement rather than a romantic melding of lives?

These are tough questions to confront, much less explore with the vulnerability and openness such a heady topic requires, as it threatens to upend one of the primary social pillars of modern civilization. But it’s a conversation that is long, long overdue: As Perel notes, since 1990, the rate of women who have reported being unfaithful in their marriages has risen by 40 percent. (Yeah. That’s a lot.)

Weaving together a broad range of anecdotes, Perel brings the requisite even-handedness and open-mindedness such high-stakes theorizing requires, and while it probably goes without saying, here’s a spoiler alert anyway: You’re not going to come away from this knowing the definitive reason why people cheat.

What you will come away from this with a better understanding of just how messy us humans are, and the ways in which our social constructs often set us up for failure.

Below, catch the opening passage of Chapter 1 to get a sneak peek at what you’re in for. Follow along on our social channels with the hashtag #girlbossbookclub, and we’ll reconvene mid-January with a livestream discussion with the Girlboss editorial team. 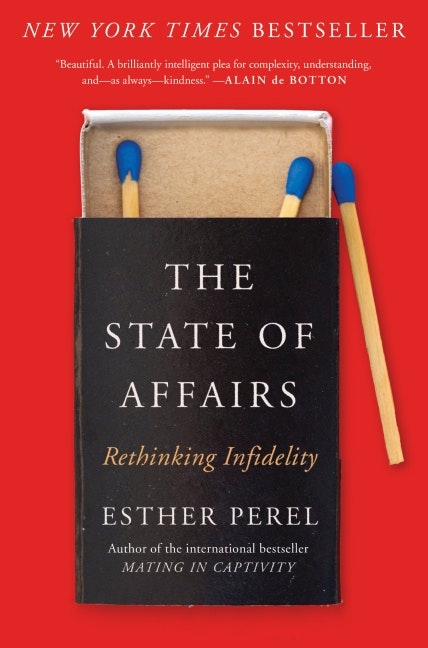 Excerpted fromThe State Of Affairs: Rethinking Infidelityby Esther Perel. Copyright © 2017 by Esther Perel. Excerpted by arrangement with Harper Collins. All rights reserved. No part of this excerpt may be reproduced or reprinted without permission in writing from the publisher.

A New Conversation About Marriage And Infidelity

At this very moment, in all corners of the world, someone is either cheating or being cheated on, thinking about having an affair, offering advice to someone who is in the throes of one, or completing the triangle as a secret lover. No aspect of a couple’s life elicits more fear, gossip, or fascination than an affair.

Adultery has existed since marriage was invented, and so too has the taboo against it. It has been legislated, debated, politicized, and demonized throughout history. Yet despite its widespread denunciation, infidelity has a tenacity that marriage can only envy. So much so that it is the only sin that gets two commandments in the Bible, one for doing it and one just for thinking about it.

In every society, on every continent, and in every era, regardless of the penalties and the deterrents, men and women have slipped the confines of matrimony. Almost everywhere people marry, monogamy is the official norm and infidelity the clandestine one. So what are we to make of this time-honored taboo—universally for- bidden yet universally practiced?

For the past six years I have been having this conversation—not just within the cloistered walls of my therapy practice, but on airplanes, at dinner parties, at conferences, at the nail salon, with colleagues, with the cable guys, and of course, on social media. From Pittsburgh to Buenos Aires, Delhi to Paris, I have been conducting my own open-ended survey about affairs today.

Around the globe, the responses I get when I mention “infidelity” range from bitter condemnation to resigned acceptance to cautious compassion to outright enthusiasm. In Bulgaria, a group of women seem to view their husbands’ philandering as unfortunate but in- evitable. In Paris, the topic brings an immediate frisson to a dinner conversation, and I note how many people have been on both sides of the story.

In Mexico, women proudly see the rise of female affairs as a form of social rebellion against a chauvinistic culture that has forever made room for men to have “two homes,” la casa grandey la casa chica—one for the family and one for the mistress. Infidelity may be ubiquitous, but the way we make meaning of it—how we define it, suffer from it, and talk about it—is ultimately linked to the particular time and place where the drama unfolds.

Let me ask you: When you think of infidelity, what are the first words, associations, and images that come to mind? Do they change if I use the words “love affair” or “romance”? What about “tryst” or “fling” or “hookup” or “fuck buddy”? Do you find your reactions skewed toward disapproval or toward understanding? Where do your sympathies fall—with the jilted, with the unfaithful, with the lover, with the children? And have your responses changed because of events in your own life?

When it comes to soulmates: “We are asking from one person to give what once an entire community used to provide.” –@EstherPerel #GirlbossRally— Girlboss (@girlboss) November 11, 2017

Convictions about extramarital affairs run deep in our cultural psyche. In the United States, where I live and work, the conversa- tion tends to be visceral, loaded, and polarized.

“Infidelity? It’s a dealbreaker,” says one. “Once a cheater, always a cheater.”

In the American marketplace, adultery is sold with a mixture of denunciation and titillation. Magazine covers peddle smut while preaching sanctimony. As a culture we’ve become sexually open to the point of overflowing, but when it comes to sexual fidelity, even the most liberal minds can remain intransigent. Curiously, our insistent disapproval keeps infidelity’s vigor in check without revealing how rife it really is.

We can’t stop the fact that it happens, but we can all agree that it shouldn’t. Constituents clamor for public apologies as they pore over the tawdry details. From the upper echelons of the political and military elite to Angie down the block, infidelity bespeaks narcissism, duplicity, immorality, and perfidy. In this view, it can never be a simple transgression, a meaningless fling, or a genuine love.

Contemporary discourse about the topic can be summed up as follows: Infidelity must be a symptom of a relationship gone awry. If you have everything you need at home, there should be no reason to go elsewhere. Men cheat out of boredom and fear of intimacy; women cheat out of loneliness and hunger for intimacy. The faithful partner is the mature, committed, realistic one; the one who strays is selfish, immature, and lacks control. Affairs are always harmful and can never help a marriage or be accommodated. The only way to restore trust and intimacy is through truth-telling, repentance, and absolution. Last but not least, divorce affords more self-respect than forgiveness.

The moralizing tone of the current conversation tends to pin the “problem” on deficient couples or individuals, sidestepping the bigger questions that the scope of the phenomenon might invite. Infidelity says a lot about marriage—not just your marriage, but marriage as an institution. It also plunges us into today’s culture of entitlement, where we take our privileges for granted. Do we really think we can distill the proliferation of cheating to a few bad apples? Surely millions of renegade lovers can’t all be pathological.

Buy The State of Affairs: Rethinking Infidelity by Esther Perel here, and following along on our social channels with the the hashtag #girlbossbookclub for updates.

Esther Perel spoke about sex, relationships and society at the recent Girlboss Rally NYC, which you can watch in full with a digital ticket.