Bethany Yellowtail is a Los Angeles-based designer whose creations weave together elements of her Native American ancestry with a contemporary twist.Today, Yellowtail’s designs and eye-catching editorial campaigns for her brand, B.Yellowtail, have helped her amass a large following on social media (57K and counting) and caught the eye of retail stores like Crate & Barrel, where she released a capsule collection earlier this year.

While scaling any small, independent business is difficult, there remain challenges unique to the Native American community. Here, Yellowtail breaks down what some of those are.

Why I launched my own brand

I created my brand, B.Yellowtail, because I worked in corporate fashion and didn’t relate to any of the stories that were being pulled about Native people. Once I developed my brand further, I saw there wasn’t a space dedicated promoting the authenticity of Native design. Working on my collection and The Collective has opened my eyes to the unique challenges facing the Native American community. So, there’s a few things I’d like to clear up.

I’m continuously asked about the negative effects of cultural appropriation. It’s a worthwhile discussion, but we sometimes get so caught up in who can wear what, that we forget the true, direct, negative impact of cultural appropriation on Native communities. When you buy loosely described “Native American” clothing and designs from non-Native peoples, you’re taking away from our literal livelihood.

It’s not about saying, “No, you can’t do that,” or, “Yes, you can do that,” or, “We don’t like that.” When you choose to buy watered-down Native designs from non-Native peoples, you’re taking business from our communities and from Indigenous creatives. All of which means, your choices affect our community directly and the way many of us earn and sustain our livelihood. At its core, cultural appropriation has real impact on actual, Native people.

Our creations and designs, these are things that have long been a part of our families and ancestral tradition. It’s in our DNA. Don’t remove us from having the opportunity to sustain our own businesses. 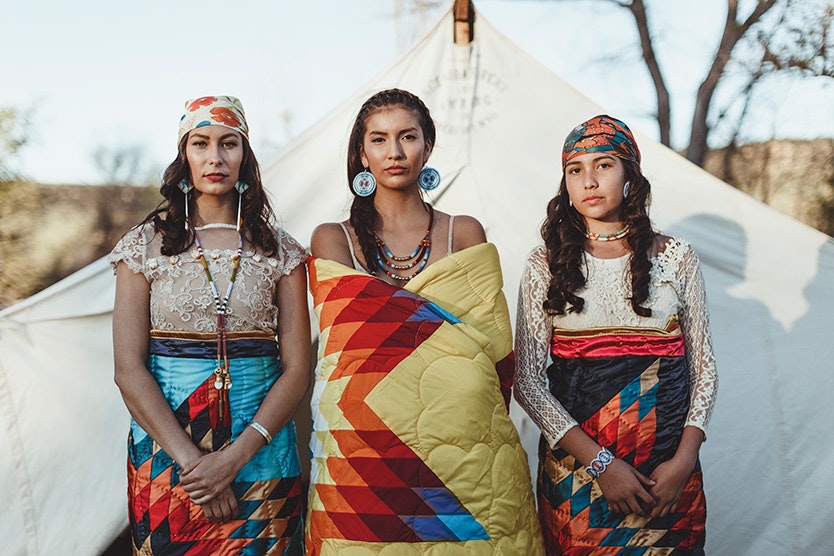 Our cultures and traditions as aren’t monolithic

There’s this huge mountain we have to climb when it comes to what the mainstream culture deems as “Native design.” There’s this idea that it’s not Native unless it looks a certain way. I consider it a symptom of the continuing stereotypes we face as Native peoples. As someone who just loves fashion and design, it’s hard. I am Native. I love sharing stories. But, there is this struggle against a certain expectation. If it doesn’t look fringe-y or feather-y or have a lot of geometric designs or beadwork, then people won’t “get it.”  Or worse, we’re glossed over altogether as designers and creatives. 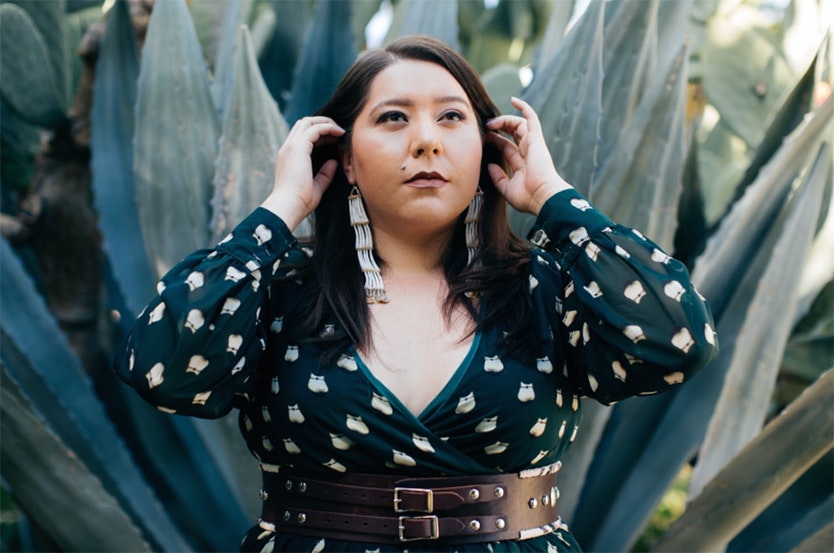 As a result, there’s this pressure to continuously—and only— create something that’s “Native-looking.” As a business owner, that’s a major challenge. But, I think: There’s boundless creativity in one human being. How can someone expect Native peoples to stick to only a certain aesthetic? How can you expect Native peoples from many different regions to look only a certain way? Let’s remember the Native narrative or stereotype you’ve seen in Hollywood—that was not created by us!

The law is, and isn’t, on our side when it comes to Native American design.

The Indian Arts and Crafts Act is supposed to protect Native people by deterring people from stealing our cultural designs and selling them as if they’re Native. That was already in place years and years ago and it hasn’t really been challenged or utilized. With limited access to resources, it’s difficult to bring suit or to copyright designs.

[Editor’s note:Few Indian Arts and Crafts cases result in prosecution, because the IACB implements preventative education, like sending a letter of guidelines and penalties to suspects, as opposed to enforcing the law. Additionally, there are roughly 250 tribes in the US that aren’t legally recognized, making prosecution even more difficult.]

Part of the solution to this problem rests on gaining greater visibility as Native artists. That’s why, as a business, we created a platform called The Collective to support Indian artists in local reservation communities. These artists are usually relying on non-disposable income and they sell very locally and have difficulty establishing a customer base outside of the region.

I got to thinking about how we could combat this problem in 2016, when I moved home for a couple of months to kind of reboot and design my next collection. When I was still, present, and thoughtful about our situation, I began imagining: What’s possible if we, as people, had ownership over our own creative expression? Imagine if that wasn’t taken from us?

What would it look like if we actually had ownership over that? The Collective is only one piece of the puzzle, but I continue thinking a lot about how we can improve.

One of the greatest challenges I face as a Native small business owner is that some people are, quite surprisingly, afraid to wear our designs because they worry they’ll be appropriating Native culture! So, not only is the market completely oversaturated with false Native American design, one of the biggest battles we have is to continuously be, like, “Hey, this is authentic. These are actual stories. We’re here.” It relates back to our greater struggle to gain visibility. 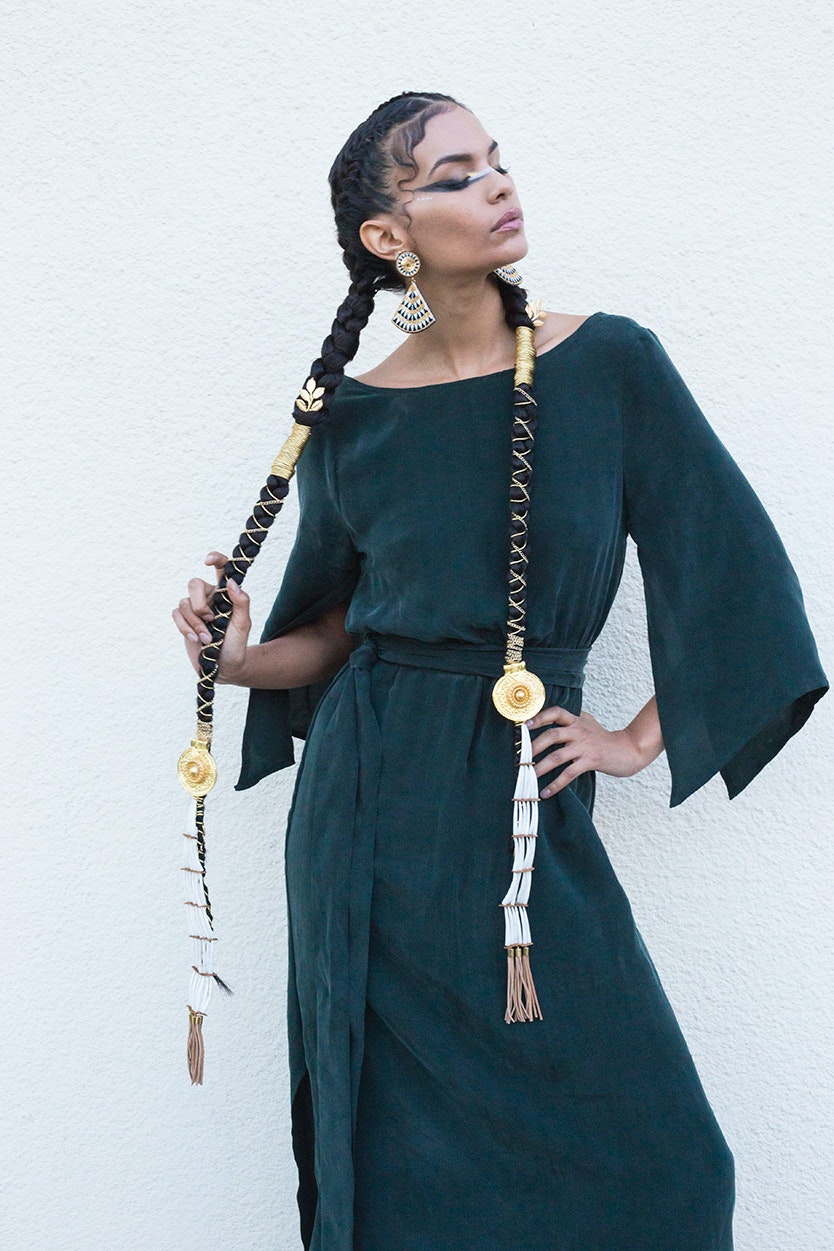 As an entrepreneur, it’s an odd situation to be in. We have people we want to be purchasing from us, who are sensitive, who like our culture, or want to be respectful. In the end, however, when people don’t buy from us, it removes us from being actual business people or being competitive in the greater market.

Native designers and creators are participating in culture-sharing. We’re trying to tell these stories is in a way that is for all people and we have these inherent permissions to do so. We’re not selling anything that’s traditional or sacred or made just for Native people.

So, what I really want people to know is: We want you to participate and purchase from us. We want you to know these stories. We want to share these with you. And, we’re doing it in a respectful way. We want you, however, to choose something authentic and, ultimately, to really see us. When you think about it, it’s a beautiful way to exchange knowledge.

A lack of access to resources makes scaling business difficult

I don’t come from a family that has money and wealth—well, any monetary wealth. We have a different kind of wealth; a cultural wealth that you can’t put a price on. Being a business owner and an entrepreneur, however, is impossible when you don’t actually have resources to get funding from major banks. How do you go about the process when you don’t have the right business acumen?

The Collective promotes and gives a platform to artists who are otherwise removed from major marketplaces. It’s partly why I’m so thankful for technology and the internet, that we can help these artists reach a global audience. It helps us use our cultural gifts, passed down by our ancestors who fought for us to still be here, to sustain our family and community. 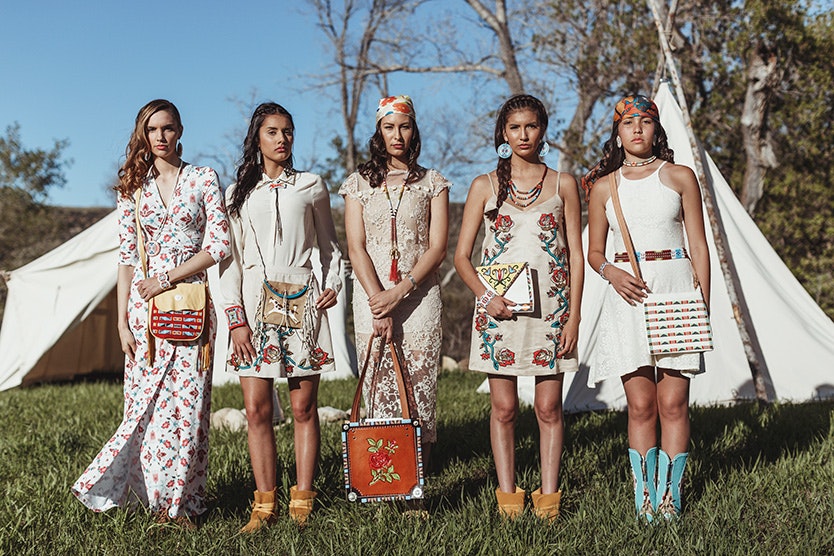 At the end of the day, I’m such a solution-person. I’m tired of talking of cultural appropriation. Let’s talk about what we, as Native peoples, can provide. For starters, when we create, there’s purposeful story attached to what we create.

It’s so exciting to see all these small businesses coming up. The fashion industry is trying to reframe and go, ‘Ok, something is changing here, what is it? This is what it is.

As told to: Theresa Avila

You can join Bethany Yellowtail at the Ace Hotel in Los Angeles on July 21 for the release of her Summer ’18 collection, a silk scarf collaboration with artist Ernesto Yerena.