The Brooklyn-based community space geared towards inclusivity and accessibility is a shining example of what we need in an era of political and cultural divisiveness.

When Sandra Hong and Melissa Wong opened the doors to New Women Space in Brooklyn six weeks before the 2016 elections, they—like just about everyone else in the country—were not expecting the politically and culturally tumultuous year that would follow.

Fast forward a year and the multi-use space dedicated to fostering an in-person community among self-identified women, femme, queer, trans and gender nonconforming individuals has become a vital refuge for many in the area.

And for all the challenges that 2017 brought, there have been numerous bright spots—one of which we are thrilled to share today: New Women Space is the latest recipient of the Girlboss Foundation grant.

Among heaps of incredible applications we received for the spring/summer 2017 round, Sandy and Melissa and their work the New Women Space stood out for their unwavering commitment to inclusiveness and community in a time when it’s more important than ever, and their big-hearted ambitions to keep bringing diverse programming to a growing sisterhood.

Below, Sandy and Melissa share the backstory behind New Women Space and what’s in store for them now that they’ve won the grant.

Oh, and just a heads up that the next deadline is December 31. Can’t wait for you all to show us what you’ve got. Apply here.

Can you tell us a little bit about the origin story of New Women Space? How did the two of you meet and decide this is what you wanted to do?

Melissa: We heard about each other’s projects at a mutual friend’s yoga studio. At the time, I had been running my fledgling organization called Up Speak, which focused on peer mentorship groups for women, and Sandy was running a weekly event series for women and non-binary folks in venues all over Brooklyn.

I immediately got great vibes from Sandy. I went to one of their events, and a few months later we found time to grab a coffee. We sat down and it was clear that we both shared a desire to have a physical community space. One week later, I floated the idea of doing a one-month pop up by Sandy and, to my surprise, they said yes! 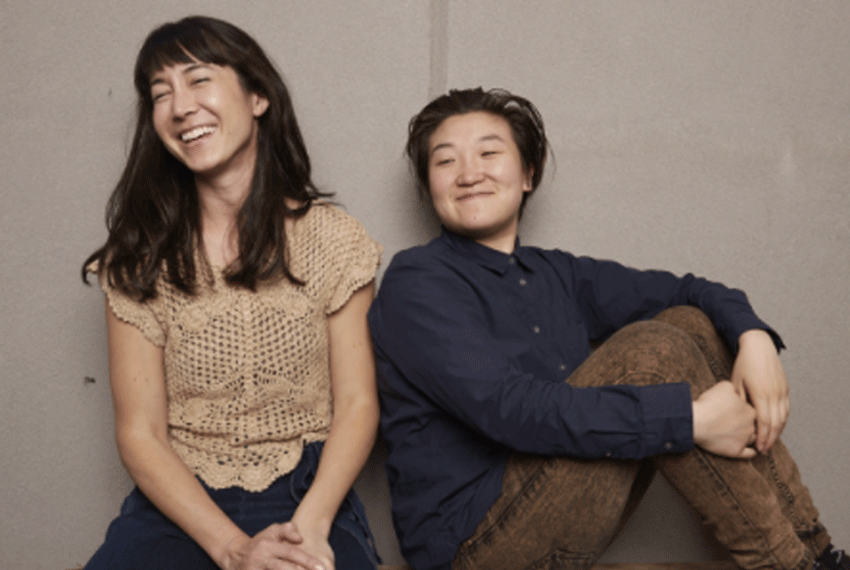 Is community organizing something that you two have always been interested in?

Melissa: My interest in community building started in college. I had an amazing experience living in a 64-person student cooperative, where we ate all our meals and learned outside of the classroom together. I wrote my senior thesis on online communities, curious to explore the ways that our increased digital screen time was impacting our connections to one another.

I went on to support creative communities like Kickstarter, SoundCloud and Seth Godin’s altMBA alumni, but always returned to a desire to connect with people in person. I attribute my work in the hospitality industry as a huge influence on preferring the in-person medium. Being able to provide a simple act like pouring someone a glass of water is something Sandy and I both take pleasure and pride in doing. It was our mutual belief that a fixed physical space would be a powerful way to build community that led to the birth of New Women Space.

Sandy: As a kid, I can recall being in so many situations where I volunteered myself to be a part of an organizing group, whether that was in committees and clubs at school, the church I grew up in, or even amidst family gatherings.

That being said, most of my political consciousness came as a result of me coming more into my queerness and my gender identity, and it took being frustrated with the lack of social spaces and gatherings for women and queer folks for me to realize I should just start organizing them myself.

I also have a crazy amount of Libra in my chart, and I feel like community organizing is a given at that point.

Tell us about the space. How did you find it, and when you set it up, what were your priorities as far as the feel and aesthetic?

Melissa: We found our space through a friend of a friend, Celine Semaan, who is now our next door neighbor at Slow Factory. It was the first and last space we saw.

We held a few feedback sessions prior to launching NWS, and the first thing we asked people to do was to draw what their ideal community space would look like. We noticed recurring themes emerge: openness, circular spaces and objects, light, coziness. So we aimed to include these elements in our space design.

We didn’t have tons of funds to buy all new furniture or have professional construction help. With the resources that we did have, we created an approachable, bright place in which both people who are new to the space and returning community members feel comfortable to kick their feet up, unwind and just be themselves.

What have been some of the biggest challenges you’ve faced since founding NWS?

Melissa: Our biggest challenge has been consistently centered around money. We originally conceived of New Women Space as a one month project. We ran a successful Kickstarter campaign and each put in a little of our own personal savings, but we didn’t start out with a ton of investment or a true business plan.

We have had countless conversations about how to keep the space accessible (many of our events are sliding scale, and the average ticket price is $10). Keeping our rental rates and event ticket prices low means that we have only been able to cover our basic operating costs each month.

Another challenge was having our front door repeatedly tagged with the word “CUNTS.” This happened about 14 times over the span of a few months. We would walk up to the space in the morning and hold our breath, wondering if we had been targeted again.

Our neighbors and community were equally as distressed by the repeat offense and helped weigh in about what we should do to address this person. In the end, we decided to make a t-shirt with that exact handwriting and tag. We sell these shirts at the space and have a percentage of proceeds donated to RAINN, the nation’s largest anti-sexual violence organization. Thankfully, we haven’t been tagged in a while!

Sandy: I suppose a challenge that seems relevant to bring up is about stamina. The number of times we’ve gathered in response to crises: natural disasters, attacks of violence on our communities, heinous political actions by DT or social media phenomenons like #metoo have all added up in just the span of a year.

At first, we were completely disheartened by the fact that so many terrible things seemed to be happening at once. And yet it also became so devastatingly clear that this was the reason why we exist; this is why we need more places in our communities to heal, convene, organize, act, seek support.

What has the reaction from the community been like?

Sandy: Grateful. People in the community seem grateful and we’re right there with them. We would also be remiss if we did not mention that the community has responded with so much willingness! It’s remarkable to see how folks step up and show up for their community—for all the tasks, big and small.

Melissa: We really were not sure who was going to show up when we first opened our doors. We knew we wanted the space to be incredibly accessible and inclusive, but we started like most small business owners do: with the people we already knew. We were so delighted when a few call outs for event submissions returned an array of different programming topics led by instructors with differing backgrounds.

We also couldn’t have foreseen the press we’ve received. We happened to launch six weeks before the presidential election, but even before then we were getting requests to be included in articles about spaces for women. This is all to say, the public appeared to sorely in need of a place like New Women Space. While people find out about our events through Instagram and Facebook, there are many people that come to NWS for the first time because of a word-of-mouth referral.

I feel so grateful that we’ve never had to question whether or not we were putting out something that people really wanted. 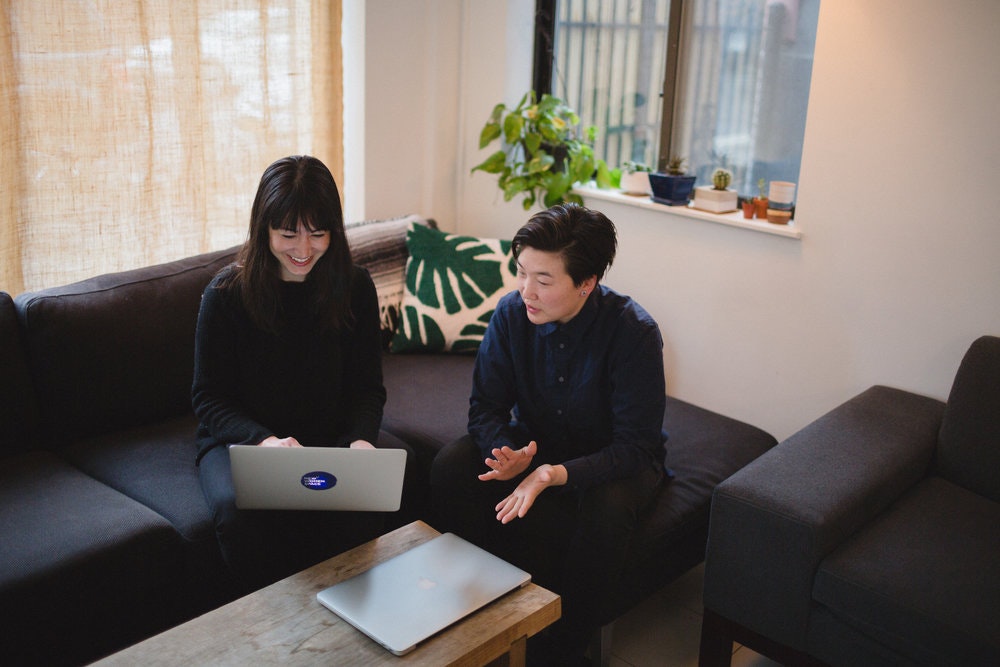 How will the grant changed things for NWS?

Melissa:The Girlboss Foundation Grant was so huge for us. When I got the email letting us know we were the recipients, I was shocked. I immediately called Sandy and started joy-crying, telling Sandy “We got it! We got it!”.

Since then, we haven’t had to worry about paying rent and can stress less about every little purchase. We’ve been able to offer more sliding scale events to event goers, and to reduce rental rates to event hosts. It has given us the mental and emotional space to breathe deeply and plan for what’s next.

The sustainability of the space is our current focus. Without the Girlboss Foundation grant, we may never have gotten to a place where we could conceivably think about sustainability past year one.

What is your definition of the word “success”?

I then think about what things generally lead people to be happy: being connected to loved ones, learning and growing, helping others, being physically healthy, and feeling a part of something bigger than yourself. It was my hope that a community space could play a positive role in providing these things to others so that they might feel more fulfilled and successful in their lives.

Sandy: Oy ve. Success for myself personally takes on a lot of different definitions. I think I’ll have to save that for my therapist.

That said, success at New Women Space thus far has ultimately been about seeing the space be used. The process of articulating what is the “right way” to utilize the space has been a reflection of my partnership with Melissa and our relationship with the community.

We are constantly iterating and evolving alongside our community and dutifully responding to its needs. I suppose in that regard, the space is most successful when it is responding to the needs of our community. I’m incredibly proud to say that New Women Space has quite possibly made a blip on the radar of history in NYC.

I’d be even more proud to say one day that New Women Space made a blip on the radar of human history as a site for (r)evolutionary dialogue and action.