Solace, a coming of age film directed by Tchaiko Omawale, follows 17-year-old Sole after she is orphaned on the cusp of adulthood, has its world premiere at the Los Angeles Film Festival on September 23. The story is inspired by the writer, director, and producer Tchaiko Omawale’s own journey with an eating disorder and self-harm.

Ahead of the film’s release, we sat down and talked to Omawale about Solace—a film that needs to exist, and one that supporters can help directly fund.

The synopsis goes like this. After her father’s death, Sole is uprooted from New York to live with her religious grandmother, and while wrestling with her grief and the unsettling limbo between high school and college, Sole plots her escape back to New York, but stumbles into powerful new friendships and finally must face the eating disorder that has been hidden until now.

Whose story does the film tell?

The film tells the story of Sole, a 17-year-old girl who is orphaned when her father dies. And she has to move and live with her estranged grandmother. Part of her angst is that her professor who you see in the beginning of the trailer, is sort of her mentor/friend. She wants to get back her professor and her plan is to go to Columbia University. And essentially when she gets sent to her grandmother, the grandmother has other plans for her.

Irene, the grandmother, is flawed but fabulous. Can you speak a bit about her character?

For me Irene isvery, very loosely based on my aunt who actually just died last year. But my Auntie Emmy, I used to stay with her when I was a kid. I’m from Jamaica but I grew up overseas in Africa and in Asia. And when I would go back home to Jamaica, I would stay with my Auntie Emmy who was a beautiful, wonderful woman. But spiritually I was an atheist, and my aunt and a lot of people in Jamaica are very Christian.

And so I sort of just inspired by that tension that I had with my family in Jamaica, and I could have put that a little bit in to the Irene character. But essentially I think maybe she’s from friends who I had growing up. This idea of somebody from a different generation, different culture that you just feel like you cannot—that you don’t identify with. It’s pretty scary for a teenager when they’ve just been uprooted from their comfort zone and sent somewhere else.

And so Irene to me is this woman who might seem harsh at first but then as you watch the film, you start to understand why she’s built up this armor or why she’s built up this façade. And you come to understand that this too is her coping mechanism. Because everybody in the film is coping with something, and just using dysfunctional means to do so.

Could you speak a bit to what New York means or what it is for Sole?

I think more than a place, it’s really about the professor—New York is embodied in the professor and the professor is a place or a woman that feels safe for Sole. A woman that is inspiring and ultimately because Sole’s mother died in childbirth and so Professor Kanem is sort of this woman that she’s taken to be her maternal figure.

And you know when you’re young, you can sort of make a relationship mean more to you than it does to the other person. So it’s not like Professor Kanem thinks of Sole as her daughter. But I think Sole definitely thinks of Professor Kanem as somebody that she is very close too. And in the film she even calls her a best friend.

What does Solace add to the conversation around girls of color and eating disorders?

Well there haven’t been any films really dealing with young girls and eating disorders. I think I found that later on the comedian Mo’Nique, made a film where it was dealing with her body image, and I think the character in Monique’s film, food was her crutch. But for my film, I think there’s something powerful in being explicit around disordered eating. Approaching it as an addiction and a compulsion. And so for me Roxanne Gay’s book Hunger was the first time I had read words that mirrored what I felt in relationship with my body. My relationship with food, in relation to trauma.

“If I had seen Solace when I was 16 years old I would have been able to identify that I had an issue.”

Really for me, if I had seen Solace when I was 16 years old I would have been able to identify that I had an issue. Because I didn’t know that what my problem was, was an eating disorder until I turned 30. I can track back to really young when I started having weird relationships with food and definitely for me one of the first sort of turning points in my life was at 12, when my brother was killed in a coup in Trinidad and food became the thing that I turned to, to not feel. I was very happy go lucky as a child, as a kid, as a teenager and in my 20s and I think food definitely is the thing that kept me from completely breaking. 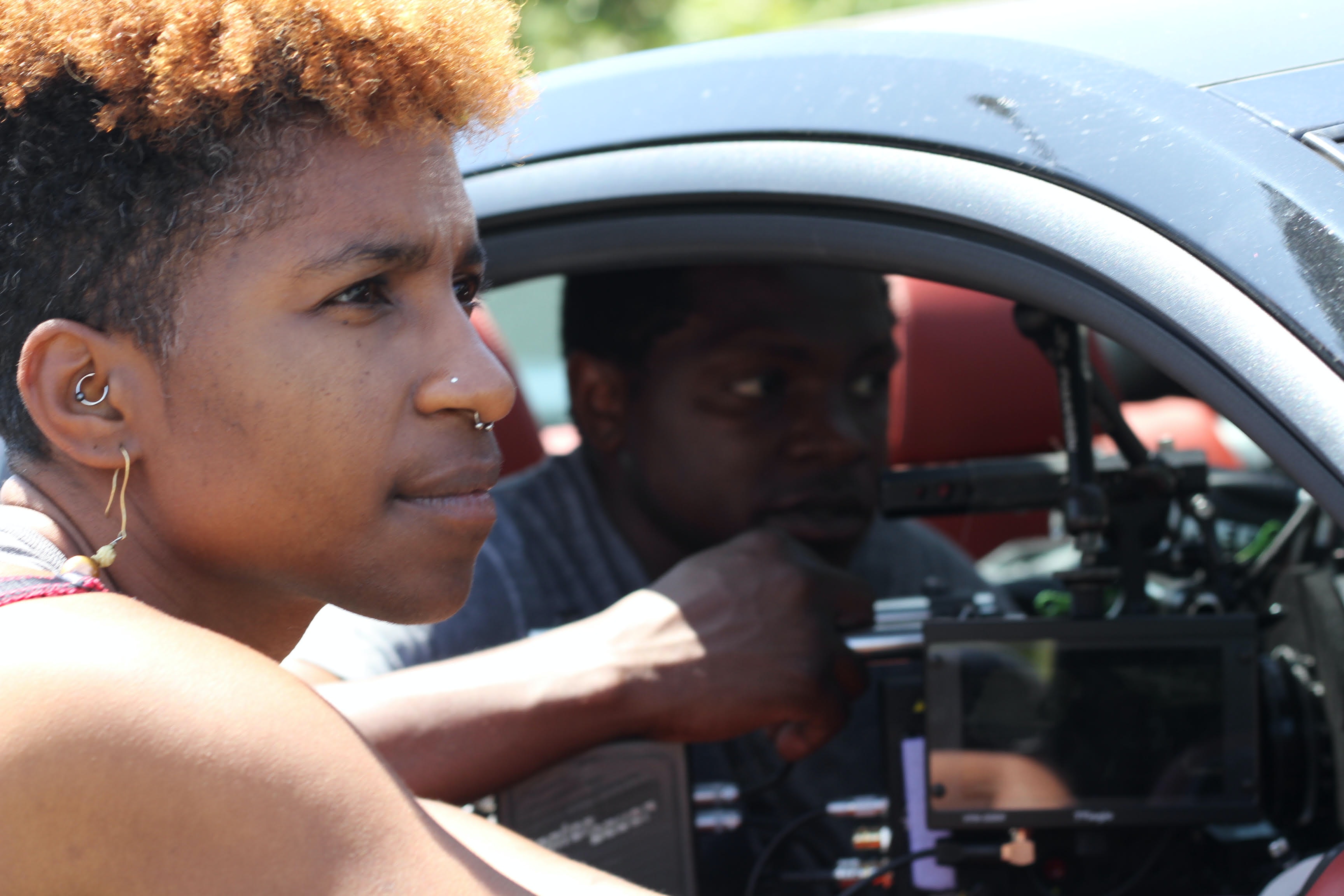 In a similar vein how do you exercise self-care? How do you take care of your mental health?

It’s a practice. There’s a lot of stress and pressure of being a black female director, you know, as much as there’s all this discourse out there about diversity and inclusion. If you looked at the actual numbers of who’s getting hired, of who gets to raise money, who gets money for what—we’re still not there yet. And so my friend and I were just talking about how we have to constantly remind ourselves about, that it’s a practice to care for ourselves and love ourselves. So I do a myriad of things.

Like for me, cultivating friendships with black women is very, very important for what I’m dealing with, with my mental health right now. To be able to be seen and heard is so important, and I go to therapy. I have a black female therapist, which is the first time that I’ve had a black woman therapist. And that’s also important to me, she’s dark-skinned like I am, so her and I talk about colorism in the industry. I don’t have to explain myself, I’m seen and I’m heard by her.

For my eating disorder, I’m in recovery, but I didn’t go to treatment. I found recovery through community and through mindfulness, but a lot of people get help from treatment, and my hope and my dream is that this country figures out a way to make health care accessible to everybody, so that everyone has access to treatment.

“I’ve had people come up to me on the DL and be like, ‘Oh I think I might have a problem.’”

Because part of the reason why it’s so hard to get treatment, or even know you have a problem, is that as a person of color you go to a doctor or a therapist—and they’re not automatically going to think that may be part of what’s going on with you. That’s just not what they’re going to think of right off the bat. So it’s really hard to get help if the healthcare industry is not even able to diagnose you.

Making the film myself, I’ve had people come up to me on the DL and be like, “Oh I think I might have a problem.” They’re not ‘out’ about it, but they come to me because they see what I’m doing. And so the film already, without it even being released in to the world, has already started to have an impact in terms of just creating a conversation around something that in and of itself is pretty shameful.

It’s not a film about eating disorders. It’s about a character who has an eating disorder and I wanted to craft it in a way that was fun and exciting and because that’s how you get people engaged.

On a similar note, so you mentioned that there was a lot of coping in this film. We see Sole cope through her artwork and in other ways. Is this something that we see her grow to understand better throughout the film? Does she focus more on healthy coping mechanisms?

I’m practicing learning how to not give away the entire film, but I will say this; all of the main characters, by the end of the film, are pushed and forced to look at the things that they’ve been running away from. I’m inspired very deeply by the fact that it took me so long to realize that I had an issue myself. And so in a similar way, Sole doesn’t know she has an eating disorder, really. This is something that she comes to find out, that she has a problem.

This film is more about an experience, than it is about a specific plot. I want the audience to feel the rollercoaster emotions of being an adolescent, but also the rollercoaster emotions of being an addict. For me they’re very similar. Because you don’t get to see black kids like that, you know. In general we don’t. I mean more and more we’re seeing this.

When I shot the film in 2015, a lot has happened since then. We’ve had Chewing Gum, andInsecure. I think there’s this movement that my friends and I, who are black female directors are really invested in—telling our very specific stories and they’re all really different. But they’re all real and authentic.

Can you speak about funding?

Despite Hollywood being very proud of itself with these buzzwords around diversity, the reality is that most of my friends, myself included—black female directors and women of color directors—we still don’t have the money behind us. I’ve been very humbled and grateful for the community support that I’ve gotten—from my crowdfunding backers to Roxane Gay, Roya Rastegar, and Franklin Leonard hosting a fundraiser for the film, and of course for the institutional support that I’ve gotten from Tribeca and IFP, Women In Film, and Creative Vision’s CAP Program, Chimaera, Big Vision Empty Wallet, and Film Independent. But it’s a total thing; for your first feature film, even in this time of heightened discourse around diversity, you’re still raising money down to the wire to get it finished.

While wrapping up post-production, the makers of Solace have set up a GoFundMe to help with the costs that go into making a film. Here’s why you might consider donating to their GoFundMe campaign. Because…